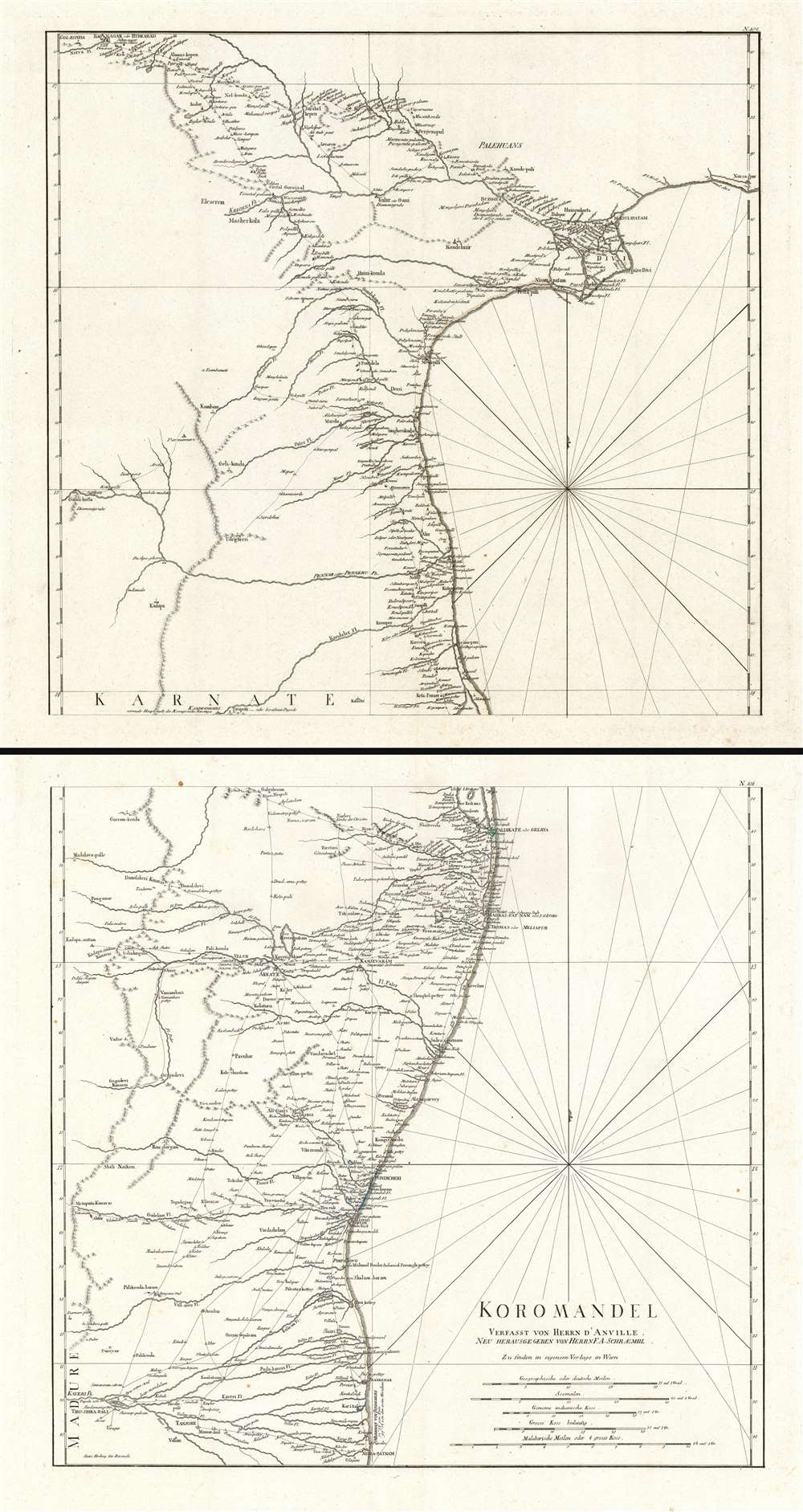 The Anglo-French rivalry over Coromandel.
$450.00

This is a monumental and highly detailed map 1789 map of the Coromandel Coast, India by Franz Anton Schrämbl. This map, on two separate sheets, covers the southeastern coast of India from Nagapattinam (Nega-Patnam) north as far as Narsapur and inland as far as Tiruchirappalli and Hyderabad. Schrämbl derived this map from the influential French cartographer Jean-Baptiste Bourguignon d' Anville's similar map of 1753, which here has been re-engraved, updated, and translated into German. It offers excellent coverage of the Coromandel Coast of India naming port cities, including Chennai (Madras), Nagappattinam (Negapatam), Puducherry (Pondicherry), Pazhaverkadu (Pulicat), etc. Several important rivers, towns, villages, roads and other topographical features are also noted throughout. Mountain ranges are rendered in profile.

The Coromandel Coast, whose name is derived from the ancient Chola Dynasty that ruled the region from the 3rd Century BC to the 13th Century AD. The Portuguese settled in the region during the 16th century, followed by the British, the French, and the Dutch during the 17th and 18 centuries, leading to rivalries among the European powers, that hoped to control Indian trade. It is of note that Schrämbl included two India maps in his atlas, this and a large general map of India after James Rennell. Control of the Coromandel Coast was traded back and forth between the French and British for nearly 100 years. By includes two maps of India, one by an Englishman, and this by a a Frenchman, he presents differing perspectives on the subcontinent.

Schrämbl prepared this map in 1789 for inclusion in his monumental Allgemeiner grosser Atlas. Though many of the maps in this atlas are dated 1789 the atlas itself was not complete until 1800, when it was published in Vienna. Schrämbl's Allgemeiner Grosser Atlas presented his Austrian audience with the works of the best cartographers of the day: D'Anville, Kitchin, Rennell, the Berlin Academy of Sciences and the St. Petersburg Academy of Sciences. A lavish production, the Allgemeiner grosser Atlas was expensive and proved difficult to sell, with the result that few were printed, leading to considerable scarcity relative to other European atlases of the period. OCLC shows separate map catalogued in only 6 institutional collections; the complete atlas is shown only in 3, the Staatsbibliothek Zu Berlin, the Institut Fuer Laender Bunde, and the Universiteit Leiden.

Very good. Minor wear along original centerfolds. Original platemarks visible. Map is on two separate sheets. Can be joined upon request at an additional cost. Blank on verso.