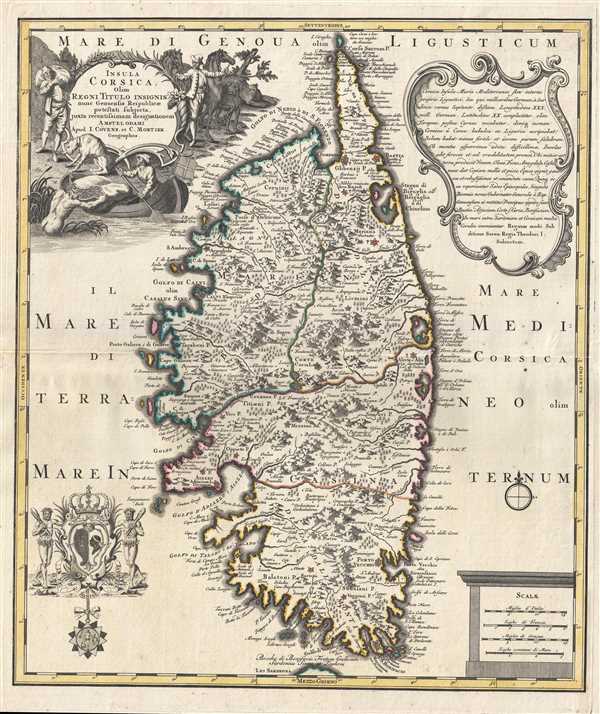 The coat of arms of the short lived Kingdom of Corsica appears in the lower left corner.

This is a 1742 Covens and Mortier map of Corsica, France. The map depicts the entirety of the island in fantastic detail, labeling cities, towns, and villages, as well as rivers and mountain ranges. Several major cities are illustrated, including Bastia, Saint Florence, Rosoli, and Porto Vecchio. The citadel at Bonifacio is also depicted at the extreme southern end of the island. A decorative title cartouche is situated in the upper left corner, with an explanatory Latin text located in a cartouche in the upper right corner. In the lower left corner, the coat of arms of the short-lived Kingdom of Corsica is illustrated, supported by two herculean-like warriors. The Kingdom of Corsica was founded in 1736 after the island crowned the German adventurer Theodor Stephen Freiherr von Neuhoff the King of Corsica.

While in Genoa, Neuhoff met several Corsican rebels and exiles, and succeeded in persuading them that he could free Corsica from Genoese tyranny if they made him king. He landed in Corsica in March 1736 and he was duly elected and crowned king. Upon assuming the throne, Neuhoff became King Theodore I, and he issued edicts, instituted a knighthood, and waged war on the Genoese. At first, he was successful in this campaign, but in-fighting among the rebels led to their defeat. The Genoese put a price on his head and Neuhoff left Corsica in November 1736, ostensibly to seek foreign assistance. After not securing a guarantee of protection from Spain or Naples, he left for Holland where he was arrested for debt in Amsterdam. On regaining his freedom, he returned to Corsica several times, but the combined forces of the Genoese and the French continued to occupy the island. Neuhoff was again arrested for debt in London in 1755, and only regained his freedom by declaring bankruptcy. He subsisted on the charity of his friends until his death the following year.