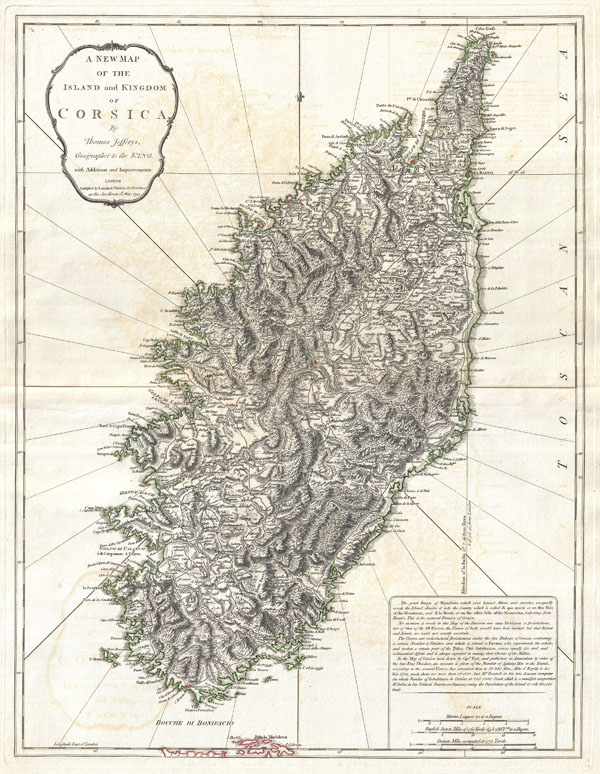 An extraordinary 1794 map of the Island and Kingdom of Corsica. Covers the entire island in extraordinary detail offering both topographical and political information. With its unique blend of dramatic mountains and stunning pristine beaches, Corsica is considered to be one of the world's most beautiful places. A note in the lower right hand quadrant discusses the geography and population of the island. Prepared by Thomas Jefferys and published by Laurie & Whittle in Kitchin's 1794 General Atlas.

Thomas Jefferys (1695 - November 20, 1771) was one of the most prominent and prolific map publishers and engravers of his day. Jefferys was born in Birmingham and was apprenticed to the engraver Emmanuel Bowen in 1735. Later, in the 1740s he engraved several maps for the popular periodical Gentleman's Magazine. Around 1740 Jefferys was finally able to go into business for himself and in 1746 received an appointment as 'Geographer to Fredrick, Prince of Wales,' which shortly after translated to the position of 'Royal Cartographer to King George III.' Jefferys initially specialized in compiling and re-engraving the works of earlier cartographers into more coherent cartographic wholes. Later, while not salaried position, Jefferys' appointment as 'Royal Cartographer' guaranteed preferential access to the most up to date cartographic material available, allowing him to produce new and updated charts of exceptional accuracy. He his best known for his maps of the Americas, particularly the posthumously published 1775 American Atlas, which included some of the finest and most important late colonial era maps of America ever made. Despite his prolific publishing history, royal appointments, and international publishing fame, Jefferys lived most of his life in dire economic straits. He was bailed out of bankruptcy by Robert Sayer during the production of the American Atlas. In the end, Jefferys died suddenly with very little to his name. Nonetheless, his cartographic legacy survived, and even after his death in 1771, many of his important maps continued to be published and republished by Sayer and Bennet, Conrad Lotter, Georges Louis Le Rouge, Laurie and Whittle, and others. Many attribute some of Jefferys best maps to the colorful and criminally inclined Irish cartographic genius Braddock Mead (John Green, c. 1688 - 1757), who is considered the 'secret behind Jefferys.' Jefferys was succeeded by his son, also Thomas, who had little success as a cartographer and eventually partnered with, then sold his stock and plates to William Faden - Jefferys' true heir.