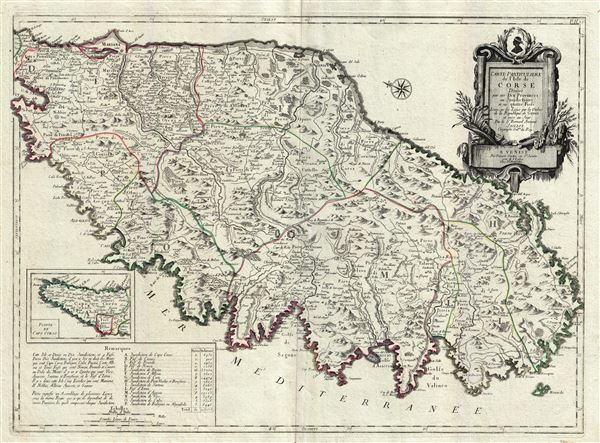 A fine Italian issue map of Corsica published in 1780 by the Venetian cartographer Francesco Santini. Oriented to the east, this map covers all of Corsica with the northern most extension, Capo Corso, appearing in an inset in the lower left quadrant. The map is subdivided into sub-regions with topography rendered pictorially. The map identifies most major roadways as well as towns, forests, swamps, and fortifications. Cartographically, Santini based this map on an earlier publication by the French cartographer, Alexis Hubert Jaillot. The upper right quadrant features a decorative title cartouche illustrating the island's flora. A table of 'Remarques' appears in the lower left quadrant. Published by Chez Remondini of Venice.


Alexis-Hubert Jaillot (c. 1632- 1712) followed Nicholas Sanson (1600 - 1667) and his descendants in ushering in the great age of French Cartography in the late 17th and 18th century. The publishing center of the cartographic world gradually transitioned from Amsterdam to Paris following the disastrous inferno that destroyed the preeminent Blaeu firm in 1672. Hubert Jaillot was born in Franche-Comte and trained as a sculptor. When he married the daughter of the enlumineur de ala Reine, Nicholas Berey, he found himself positioned to inherit a lucrative map and print publishing firm. When Nicholas Sanson, the premier French cartographer of the day, died Jaillot negotiated with his heirs to republish much of Sanson's work. Though not a cartographer himself, Jaillot's access to the Sanson plates enabled him to publish numerous maps and atlases with only slight modifications and updates to the plates. As a sculptor and an artist, Jaillot's maps were particularly admired for their elaborate and meaningful allegorical cartouches and other decorative elements. Jaillot used his allegorical cartouche work to extol the virtues of the Sun King Louis IV, and his military and political triumphs. These earned him the patronage of the French crown who used his maps in the tutoring of the young Dauphin. In 1686 he was awarded the title of Geographe du Roi, bearing with it significant prestige and the yearly stipend of 600 Livres. Jaillot was one of the last French map makers to acquire this title. Louis XV, after taking the throne, replaced the position with the more prestigious and singular title of Premier Geographe du Roi. Jaillot died in Paris in 1712. His most important work was his 1693 Le Neptune Francois. Jalliot was succeed by his son, Bernard Jean Hyacinthe Jaillot (1673-1739), grandson, Bernard Antoine Jaillot (???? – 1749) and the latter's brother-in-law, Jean Baptiste-Michel Renou de Chauvigné-Jaillot (1710 - 1780).


Remondini (fl. c. 1657 - 1861) were a family of printers who worked originally based in Bassano del Grappa, near Venice. Giovanni Antonio Remondini (1634-1711), the family patriarch, was born in Padua in 1634. In 1657, he took a home the main square of Bassano where he opened a shop drapes, wool, silk and iron tools. He also sold woodcuts of saints which proved popular with local farmers who believed they bought spiritual protection. When Giovanni died in 1711 his printing business fell into the hands of his son, Joseph Remondini. In 1750 Joseph expended the family business into Venice proper. Having several paper factories established by Giovanni Antonio, the Remondini were in a position to undercut competitors in Venice. The Remondini employed a number of talented engravers, including Paolo Santini, an Abbot who specialized in sacred images as well as cartography. Their corpus includes several beautifully produced atlases, though, cartographically speaking, little in the way of original work. The family fell into decline following the Napoleonic invasions, finally closing their doors in 1861. Most of the Remondini family's work is today preserved in the Museum of Bassano del Grappa and the Piccolo Remondini Museum of Vicenza.