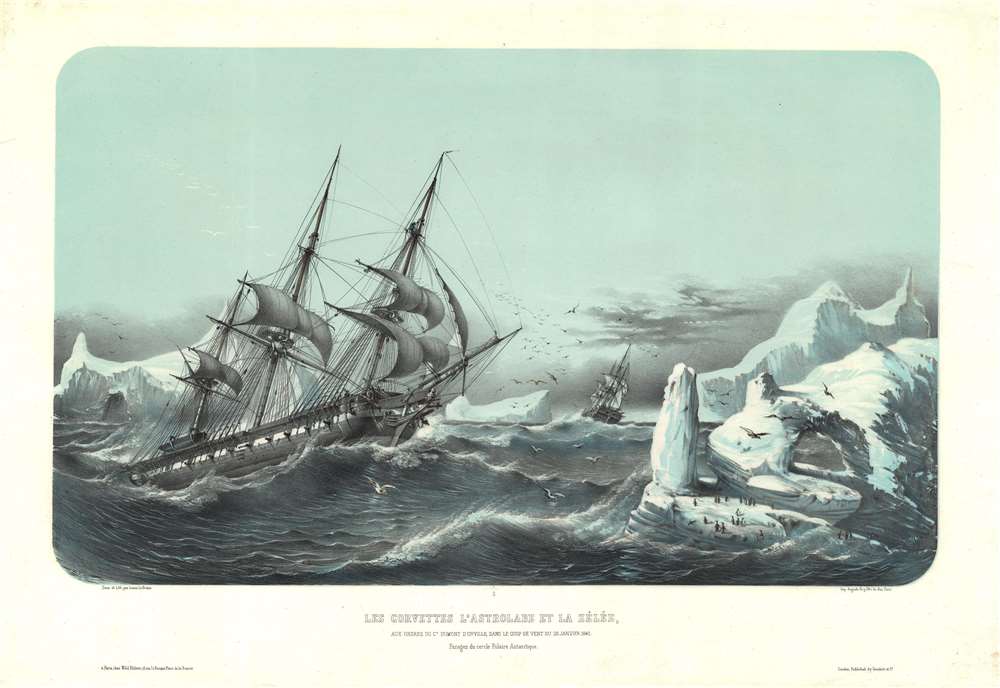 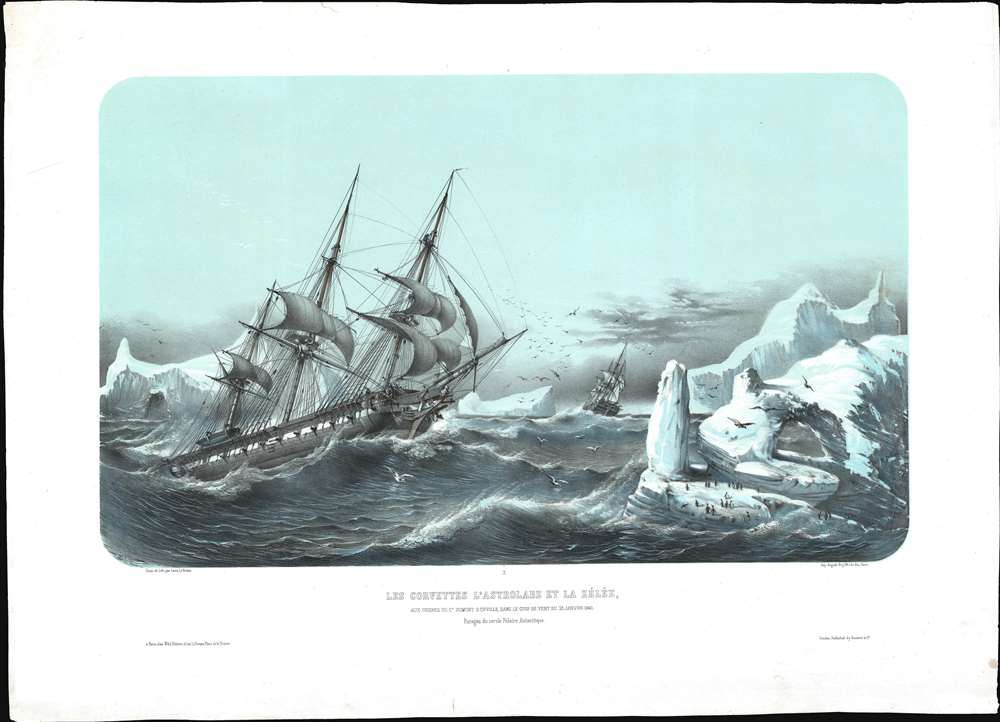 A striking c. 1841 Louis Le Breton maritime view of the Dumont d'Urville's third expedition in violent Antarctic seas. Le Breton's view depicts the Astrolabe (left) and Zéllée (right), struggling against extreme Antarctic conditions. High waves and dangerous icebergs make for a treacherous scene - a sharp contrast to the penguins at right enjoying what, for them at least, must have seemed a fine warm day.

This image was drawn shortly after the expedition reached its southernmost point, on January 22, 1840. On that date, crew disembarked on the north-westernmost and highest islet of the rocky group of Dumoulin Islands, in modern terms about 4 km north from the glacier extremity near Cape Geodesie. There they hoisted the French Tricolour, accomplishing their mission, and naming the archipelago Pointe Géologie, and the land beyond, Terre Adélie. Afterwards, the voyage turned north towards warmer waters. The glaciers and penguins in his illustration suggest the expedition is slowing making its way out of the coldest and most dangerous waters.

Scarcely back from his Second Voyage, Jules Sébastien César Dumont d'Urville (1790 - 1842) immediately began canvassing for a third voyage - this time to the southern latitudes. Although he hoped to explore the in the tropics (don't we all), King Louis-Phillipe was keen for a French voyage of discovery capable of rivaling Cook's achievements. D'Urville was commanded to place the French flag as far south possible in the Antarctic Waddell Sea. The crew was even promised a bonus of 100 francs when 75° South was attained. His two ships Astrolabe under d'Urville, and the Zélée under Charles Jacquinot set sail from Toulon in September of 1837. Along the way they visited New Zealand, Singapore, Australia, Chile, Brazil, Tenerife, the Cape of Good Hope, and more. They crossed the Antarctic Convergence on January 16, 1840 and two days later found themselves in the middle of an ice sea. Pressing on, they hoisted the Tricolour at Cape Geodesie and the voyage hydrographer, Clément Adrien Vincendon-Dumoulin (1811 - 1858) prepared an impressively accurate map of the coast. There, they met the even more ambitious U.S. Exploring Expedition commanded by Charles Wilkes (1798 - 1877). Turning north again, the crew celebrated, popping champagne when they crossed the Antarctic Circle and sailed into warmer climes. Back in France, d'Urville was celebrated, promoted to rear-admiral, and awarded the gold medallion of the Société de Géographie - their highest honor. Two years later d'Urville and his family died in a tragic train derailment - France's first - on their way from Versailles to Paris.

This view was drawn and engraved around 1841 in Paris by Louis le Breton. Breton likely sketched the view on the expedition, then produced the final version - as here - shortly after the voyage's return to Paris in 1840. The view as printed in two-color chromolithograph by Auguste Bry. It was published jointly in Paris by Chez Wild, and in London, by Gambart and Company. It is rare. We note a single institutional holding - at the National Library of Australia, and a single sale record (Bonhams, 2012), where it fetched roughly 4100 USD.

Louis Le Breton (January 15, 1818 - August 30, 1866) was a French medical doctor and maritime painter active in the middle part of the 19th century. He was born in Douarnenez,, France to a long line of doctors. He studied medicine at the L'École de Médecine de la Marine de Brest (1837 - 1837), subsequently joining the navy as surgeon. Le Breton is notable for having taken part in the third Jules Dumont d'Urville (1790 - 1842) voyage (1837 - 1841). He initially joined the expedition on board the Astrolabe as a surgical assistant. Breton was distantly related to d'Urville and leveraged his family connections for a place on the prestigious circumnavigation. In the early days of the expedition, Le Breton befriended the expedition's official painter, Ernest Goupil (1814 - 1840), under whom he studied marine painting, quickly exhibiting a natural proficiency. In 1840, when Goupil died of dysentery in Hobart, Tasmania, Le Breton took over the artist's official duties. When the voyage returned to Paris, he was knighted as a Chevalier de la Légion d'Honneur and on D'Urville's recommendation worked in subsequent years compiling the Atlas du Voyage for D'Urville's official account. He returned to the sea in 1844 on board the Cradle, again as a surgeon, returning to Paris in 1846. From 1847, he dedicated himself fully to painting, formally resigning his naval commission in 1848. Afterwards, he worked as a draftsman and engraver, famously producing graphic illustrations of demons for Collin de Plancy's Dictionnaire Infernal. Le Breton died in Paris of cholera in 1866. Learn More...


Jean Joseph Ernest Theodore Gambart (October 12, 1814 - April 12, 1902) was a Belgian-born English art dealer and publisher who eventually grew to dominate the London art world in the mid-nineteenth century. Born in Kortrijk, Belgium, Gambert was the son of a bookseller, binder, and printer. He moved to Paris before he was nineteen and established his own print and papermaking business. He moved to London in 1840 to establish a branch there for the well-established print publishing company Goupil. In 1842 he established his own firm yet again, forming a partnership with a Mr. Junin, and their firm Gambart and Junin specialized in importing art prints from Europe. By 1844, the company had established itself as print publishers as well as importers and exporters. Gambart quickly became known as a leading art print publisher, and gained a reputation for fair and mutually beneficial agreements with artists. By 1849 Gambart expanded to include original works. Gambart was one of the first to establish an art gallery as they are recognized today, creating relationships between himself and artists and art buyers. Before his exhibitions at his gallery, art was generally sold directly from the artist to the buyer, who was often a patron. Gambart married three times but did not have any children. In 1846, he became a British subject. Gambert retired in 1870 and handed the business over to his nephew, Léon Henri Lefèvre,l who continued the business, and the Lefevre Gallery existed in London until 2002. Gambart moved to Nice with his third wife, whom he married when she was sixteen years old, and he died in 1902. Learn More...