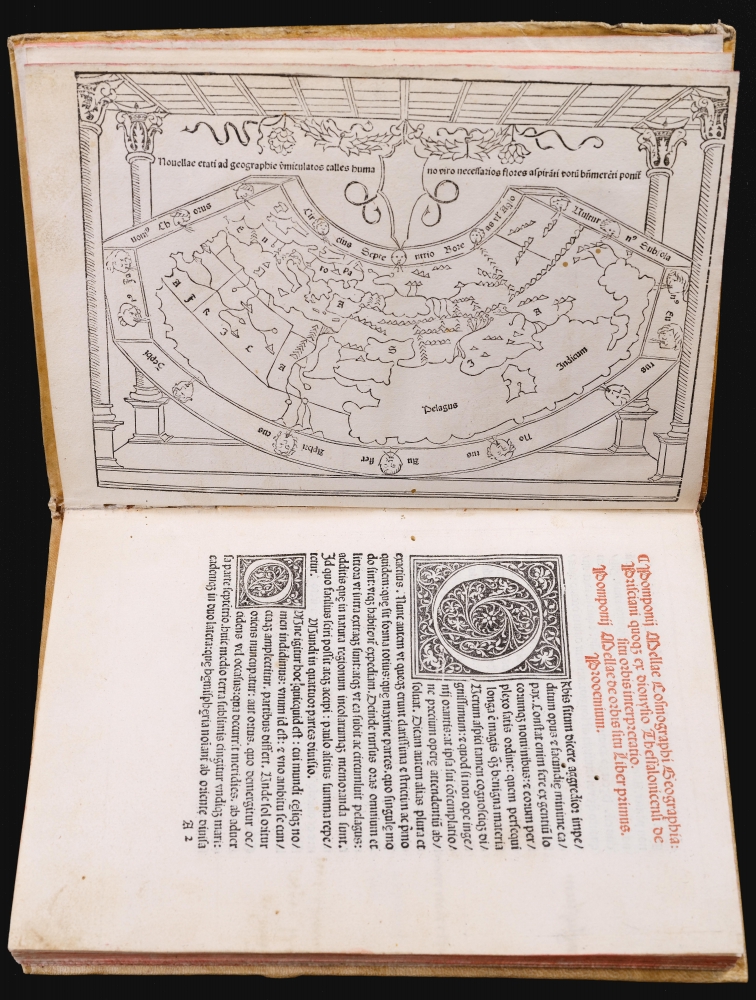 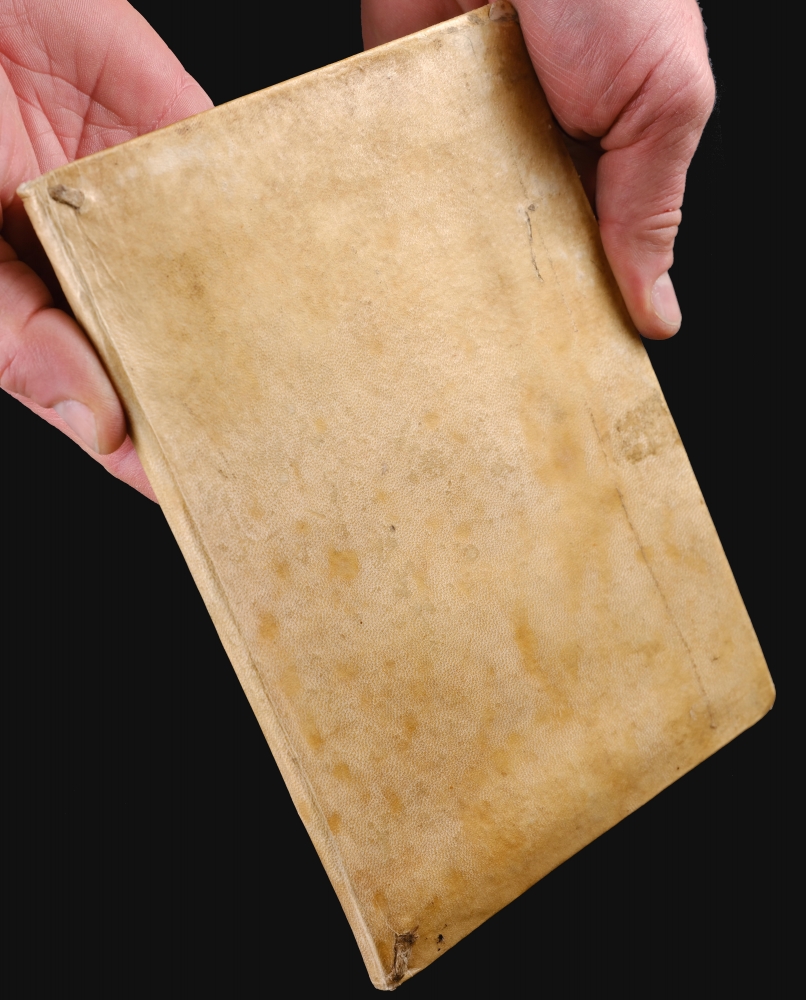 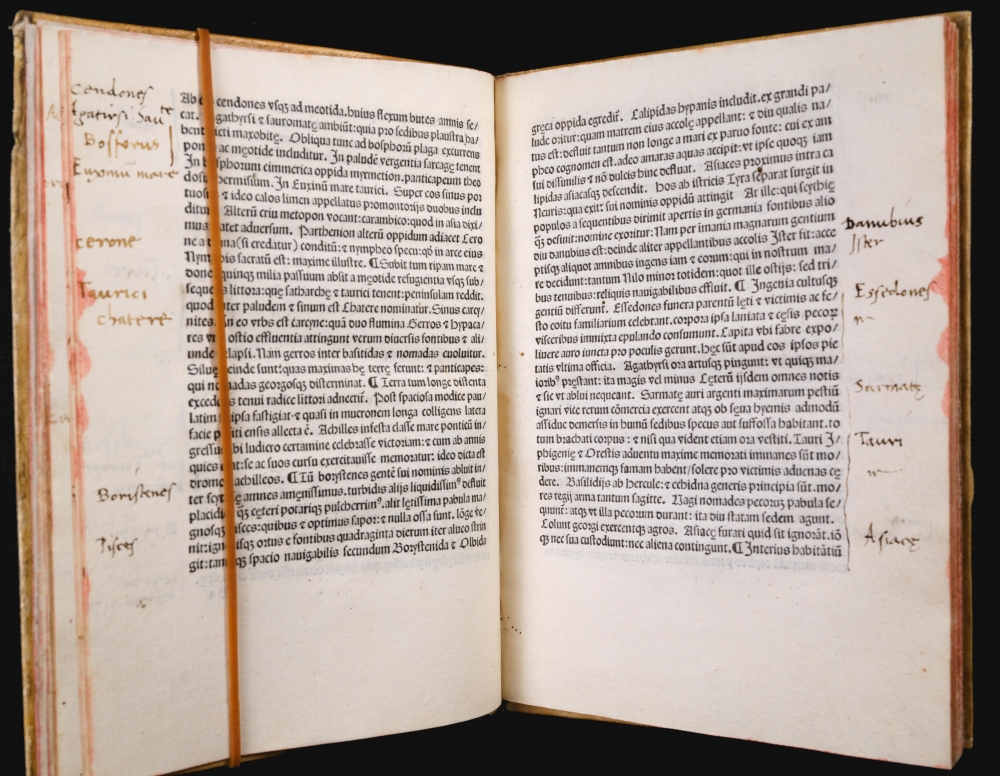 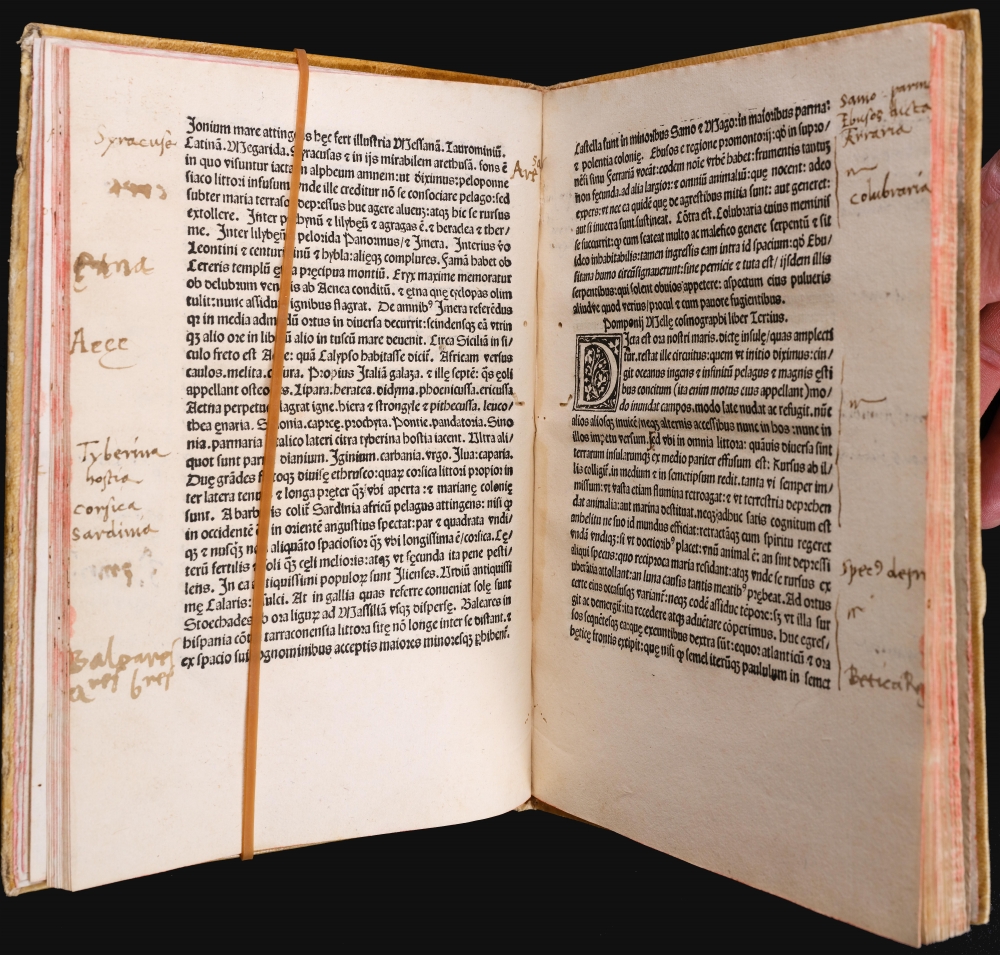 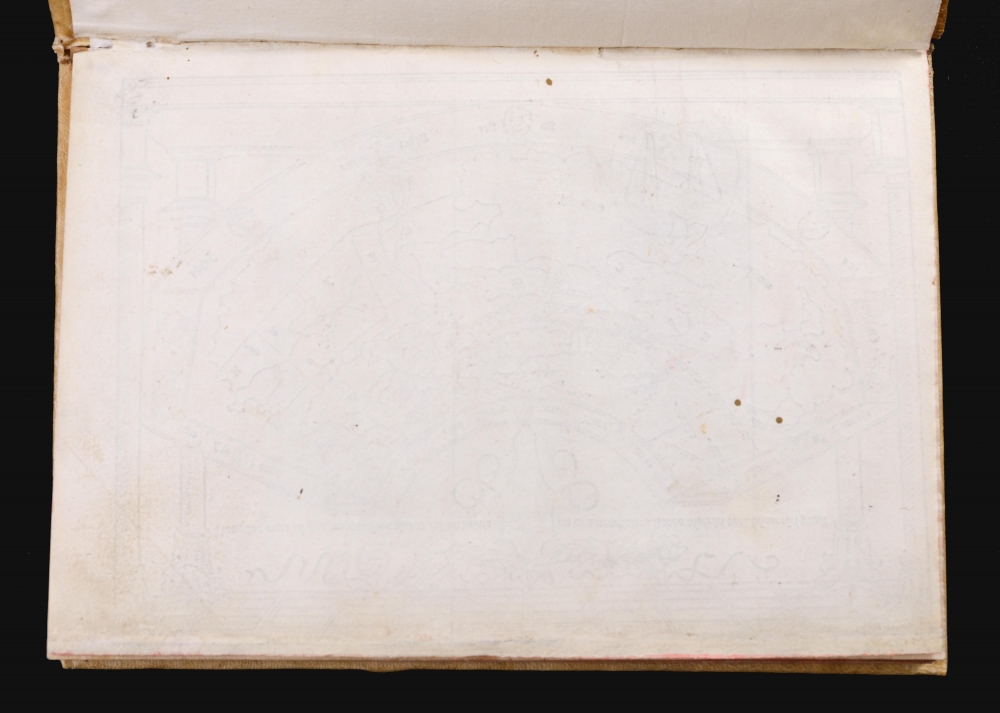 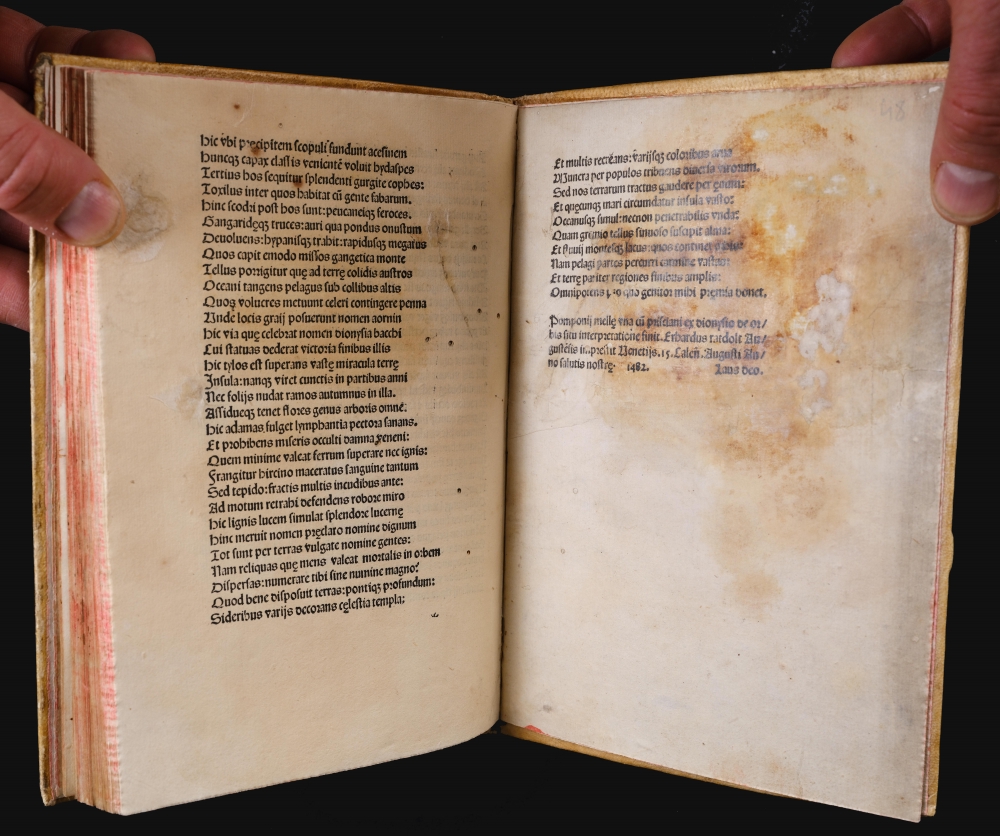 This is a rare, important 1482 incunable edition of Pomponius Mela's Cosmographi Geographica or De situ orbis, the only full Latin text on geography to have survived the classical era. This 1482 edition is doubly important as the first geographical text to include a map, as opposed to an atlas. Moreover, it is the only map of the pre-1500 era to show evidence of the Portuguese voyages of discovery.

Incunables are books from the earliest stages of printing in Europe, up to the year 1500. (The word derives from the Latin word for 'Cradle'.) Such works are rare, and desirable for their place in the history of printing and thought, even apart from the importance of their content.

Mela's cosmography was written during the reign of Emperor Claudius (10 BCE - 54 CE), but remained an authoritative text well into the 16th century. It is the only formal geographical work in classical Latin, and as such, remained in the curriculum well into the 19th century. Unlike the geographical work of Claudius Ptolemy, Mela's work persevered through the European Middle Ages. Four examples predating the 14th century survived in manuscript. It was first printed in Milan in 1471. In 1478, Erhard Ratdolt produced a Venice edition. However, neither of these early printings included a map, which only appeared in this 1482 edition.

Mela's text consists of a description of the known world. His world is spherical, divided into a northern and southern hemisphere, with uninhabitable poles and divided by an equally unlivable equatorial region. The equatorial 'torrid' zone divides two habitable zones, the northern of which represents his 'known world'. Mela is remarkable in that he postulates a southern habitable zone populated by a people he names 'Antichthones'.

Mela's detailed description of the known parts of the northern hemisphere follows coastlines. He identifies ports and landmarks in a manner derived from the accounts of Roman navigators. He begins at the Straits of Gibraltar, first describing the south Mediterranean coast. He then moves on to Syria, Asia Minor, and the Black Sea. Thereafter, he returns along the north Mediterranean. He then discusses the oceanic coasts from Spain and Gaul to India, and from India to Persia, Arabia, and Ethiopia. Mela's conception of Africa stands in contrast to that of Ptolemy in that he assumed Africa did not extend far south, and that it was circumnavigable. His understanding of the British Isles - including even the Orkneys - was superior to any of his predecessors.

This book, the edition of 1482, is the first to include a map. This small map is the second woodcut map published in Italy, but it is the earliest world map (other than a T-O schematic) to appear in a geographical text, as opposed to an atlas.

Mela's work is descriptive, and probably did not initially include a map. Later geographers, nonetheless, did construct maps based on Mela's descriptions, although none were committed to print until c. 1550. These maps also benefited from the revelations of the age of discovery.

The map in the present work was derived from the map proposed by the Alexandrian geographer Claudius Ptolemy. The European rediscovery of Ptolemy's geographic texts in the 15th century transformed the discipline of geography and provided a new, clearer framework for Mela's descriptions. It is, overall, a reduced version of the Ptolemaic world maps composed by Nicolaus Germanus. (Virtually every Ptolemy of the 15th and early 16th century, printed or manuscript, can be traced to Germanus.) While this map is a small work, shorn of the detail in some folio maps of the era, the map's treatment of the African coast tells the remarkable tale of Portuguese voyages of discovery. This is the first map to indicate the eastward trend to the west African coast, a discovery that presaged Bartolomeu Dias's (c. 1450 - 1500) 1488 rounding of the Cape of Good Hope. The map's Ptolemaic depiction of a landlocked Indian Ocean stands in contradiction to Mela's text, a testament to the authority vested in the Greek-Alexandrian Ptolemy's foundational geographic work.

A Geography in Verse

This edition of Mela also includes Alexandrian Dionysius Periegetes' 2nd century verse description of the world in Greek hexameter. The work was popular as a schoolbook, and it was translated in the early 6th century by Priscian of Caesarea - the Latin grammarian better known as the author of Institutes of Grammar, the standard Latin textbook in the Middle Ages. Priscian's works were committed to print in 1470, but the inclusion of his translation of Dionysius in a geographical work, rather than grammatical, did not occur until this 1482 edition of Mela.

The marginalia of this example suggests the reader found Mela's text more worthy of study than that of Dionysius. The former is neatly and extensively annotated, whereas the latter is bare.

This edition of 1482 was published by Erwin Ratdolt in Venice. It is well represented in institutional collections but is scarce on the market.

Pomponius Mela (died 45 CE) was the first Roman geographer. He produced a short work, De situ orbis libri III, which would continue to be an authority well into the 16th century; geographers such as Ortelius would continue to mine Mela's work for data where modern authorities remained silent. Apart from Pliny's Historia naturalis Mela's work is the only formal geographical work in Classical Latin, and as such it remained in the curriculum well into the 19th century. Learn More...


Dionysius Periegetes (fl. 110-140) Εὐστάθιος Θεσσαλονίκης, literally Dionysius the Voyager or Traveller, also known as Dionysius of Alexandria or Dionysius the African, was the author of a description of the then-known world in Greek hexameter verse. He is believed to have lived in Alexandria during the reign of Emperor Hadrian. His work survived mainly as a schoolbook, intended to teach Greek and (with later translations) Latin. Learn More...


Priscianus Caesariensis (Priscian of Caesarea) (fl. 500-530) was a Latin grammarian best known as the author of Institutes of Grammar, the standard textbook for the study of Latin in the Middle Ages. He was born in Caesarea, modern Cherchell in Algeria. It was then capital of the Roman province of Mauretania Caesariensis, which during Priscian's life was part of the Vandalic Kingdom. He is reported to have taught Latin in Constantinople. Known dates to his works are scarcePriscian's works were committed to print in 1470, but the inclusion of his translation of Dionysius Periegetes in a geographical work, rather than grammatical, did not occur until the 1482 edition of Pomponius Mela. Learn More...

Very good. Map measures 5.25 x 7.25 inches. Small 4to, (48) ff., (A-F8), including one full-page woodcut map of the world on verso of a1. First leaf printed in red and black, and 2 large and 10 small woodcut initials in text. Manuscript marginalia throughout in a neat old hand. Bound in stiff later vellum. Some worming throughout, with minimal impact on printed matter. Map very good, top margin extended with ms. reinstatement of part of top engraved border. Final leaf scuffed and mounted with some staining. Overall a very handsome, presentable example.