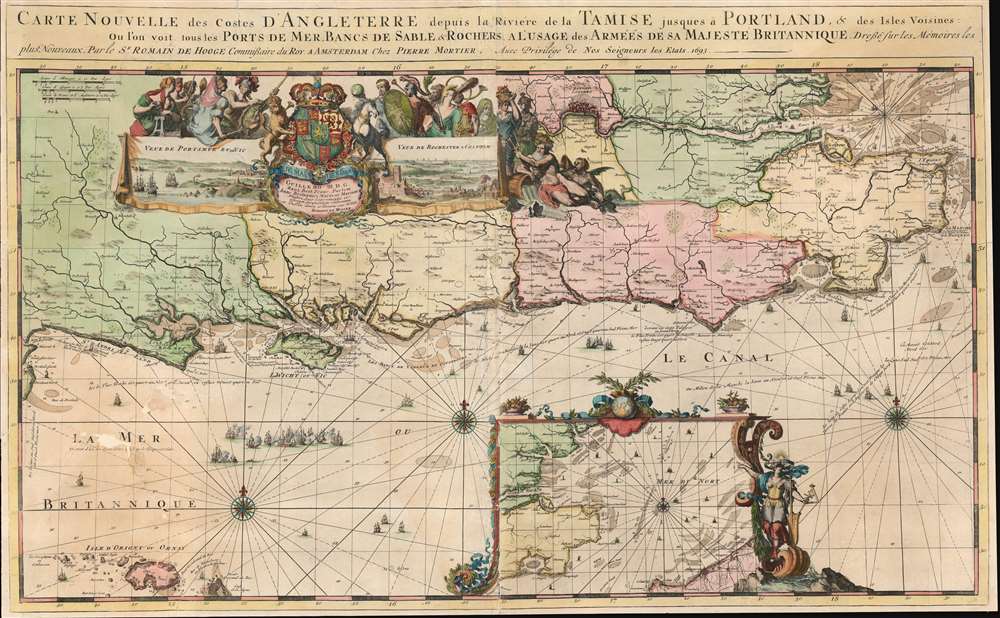 This is a 1693 Romeyn de Hooghe map of the southern coast of England including the Thames estuary and London. The map depicts from the Isle of Portland east to the Thames estuary and from London to Aldernay, including the Isle of Wight. Cities and towns are labeled throughout. An inset along the bottom border focuses on southeastern England and the North Sea along with northeastern France around Calais and Dunkirk. A decorative cartouche appears in the upper left quadrant and includes views of Portsmouth and Rochester. Wonderfully decorated with compass roses and rhumb lines, this chart is part of a group of nine charts created by de Hooghe and published by Mortier, all of which are regarded as the most decorative sea charts of the 17th century.

This map was created by Romeyn de Hooghe and published by Pierre Mortier in 1693. Two examples are cataloged in OCLC and are part of the institutional collections at the Bavarian State Library and the National Library of Spain.

Romeyn de Hooghe (Septemer 10, 1645 – June 10, 1708) was a Dutch engraver, portrait artist, caricaturist, painter, and sculptor active in Amsterdam during the second half of the 17th century and opening years of the 18th century. De Hooghe was born in Amsterdam and revealed an early talent for all forms of visual arts. He became known caricaturist and is admired today as one of the first great graphic satirists. During his life he was criticized for his proclivity towards humorous tongue-in-cheek subjects. He nonetheless developed a following and produced a prolific amount of work, some 5000 engravings. He was a member of the Confrerie Pictura in 1662 and 1683. Cartographically he is best known for his decorative border work. His disciples were Filibert Bouttats (1654-after 1731), Filibertus Bouttats (1635–1707), Frans Decker, François Harrewijn, Jacobus Harrewijn, Aernout Naghtegael, Laurens Scherm, and Adriaen Schoonebeek. De Hooghe died in Haarlem on June 10, 1708. Much of his work continued to be republished posthumously. Learn More...