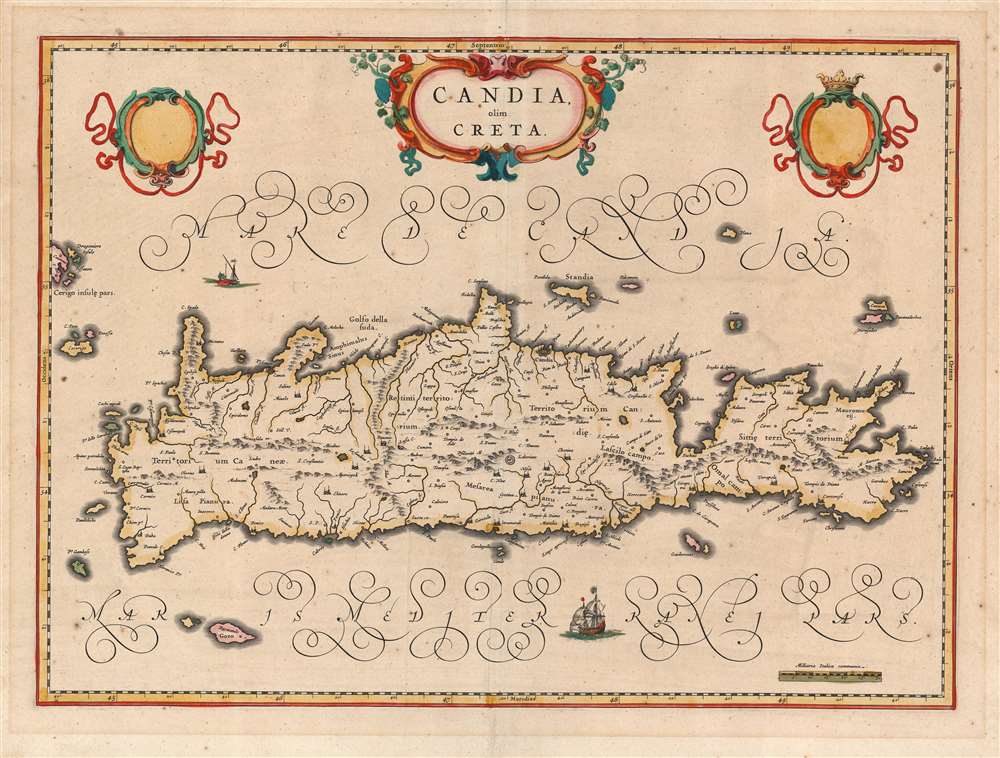 A Classic Dutch Map of Crete.

This is Joan Blaeu's map of the island of Crete, in its first edition. It was prepared for the 1640 Latin edition of the Blaeu Atlas Novus. Blaeu's map follows the work of Georgio Sideri Calapoda (fl. c. 1537 - 1565), also used by Ortelius, Mercator, and Hondius. The primacy of Calapoda's manuscripts was not misplaced: as a denizen of Crete, he knew the island and its history well. His model for the mapping of the island superseded the 1513 Waldseemüller model. The place names here reproduce those as they appeared in Jodocus Hondius' Candia cum Insulis Aliquot Graeciam, but Blaeu's fine engraving improves greatly in terms of legibility and brightness. (So far improved was Blaeu's version that Jan Jansson would copy it faithfully for his 1644 Candia olim Creta.

The Labyrinth and Other Holes in the Ground

Among the features appearing here is a symbol representing the Labyrinth of Daedalus: the legendary maze built for King Minos to contain the bull-headed Minotaur. While often considered to have been constructed at Knossos, recent archaeology suggests a series of tunnels at Gortyn, which is tantalizingly close to the location of the labyrinth symbol on the Waldseemüller map. This would correspond with Gortyna, the Cretan capital in the 1st century AD. Other archaeological sites of interest appear. Crete's Lassithi Plateau is shown (Lascilo Campo) as well as the Dikti Mountains nearby. Greek Mythology identifies this area as the birthplace of Zeus, and was said to be the divine lecher's hiding place after his abduction of Europa.

Blaeu's map dispenses with the stippled sea areas favored by Ortelius and Hondius, allowing for finer and more legible lettering - as well as the bold calligraphic flourishes naming those seas. Coastlines are marked with hachure. There are two sailing ships. Mountain areas are shown pictorially. There is a beautiful strapwork, garlanded title cartouche at top center. Flanking it are two equally elegant cartouche frames which are empty of the coats-of-arms they could be expected to contain. (Interestingly, the dedicatory cartouche of Jansson map copied from this one was also empty.) The map was produced during the period of Venetian rule over the island, eight years prior to the beginning of the Turkish Siege of Candia.

This map was engraved by Joan Blaeu, in 1640 for inclusion in that year's Latin edition of the Blaeu Atlas Novus. It continued to appear in the Blaeu atlases until the final 1672 edition of Blaeu's Atlas Maior. Blaeu's atlases are well represented in institutional collections. We see twenty examples of the separate map, in various editions, listed in OCLC.


Giorgio Sideri, also known as Calapoda (fl. 1537–1565) was a Cretan cartographer, though he lived and worked in Venice. His surviving navigational and hydrographical work is wholly manuscript, dating between 1537 to 1565; he authored no printed work. His manuscript of his home island provided the basis for virtually every map of Crete produced in the 17th and early 18th century. His most recently famous work was a 1541 manuscript copy of a fifteenth-century portolan chart by Fra Mauro, not known to have survived in any other form. Learn More...

Blaeu, W. and J., Theatrum Orbis Terrarum, sive Atlas novus. (Amsterdam: Blaeu) 1640.     The classic Dutch atlas, whose publication ushered in the Dutch golden age of cartography. Willem Jansz Blaeu had been, since 1604, producing engraved maps for sale; these were separate issues (and all consequently extremely rare) until the publishing of Blaeu's Appendix in 1630 and 1631, which also included a number of maps purchased from the widow of Jodocus Hondius, (for example his famous iteration of John Smith's map of Virginia.) In 1634, he announced his intention to produce a new world atlas in two volumes, entitled Theatrum Orbis Terrarum, sive Atlas Novus (in an effort to invoke the successful work of the same title produced by Ortelius the previous century, while reinforcing the notion of it being a new work.) This work was published first in German in 1634, followed by Latin, Dutch and French editions in 1635. Blaeu's maps have always been noted for the quality of their paper, engraving and fine coloring, and this was the intent from the very start. The 1634 announcement of the upcoming work described it: 'All editions on very fine paper, completely renewed with newly engraved copperplates and new, comprehensive descriptions.' (van der Krogt, p,43) Many of the most beautiful and desirable maps available to the modern collector were printed and bound in Blaeu's atlases. Willem's son, Joan, would go on to add further volumes to the Atlas Novus, concurrently printing new editions of the first two volumes with additional maps, in effect making these new editions an entirely new book. Under Joan there would be nine Latin editions, twelve French, at least seven Dutch, and two German. This exceedingly successful work would be the mainstay of the Blaeu firm until 1661, at which point the work was supplanted by Joan Blaeu's masterwork Atlas Maior in 1662.