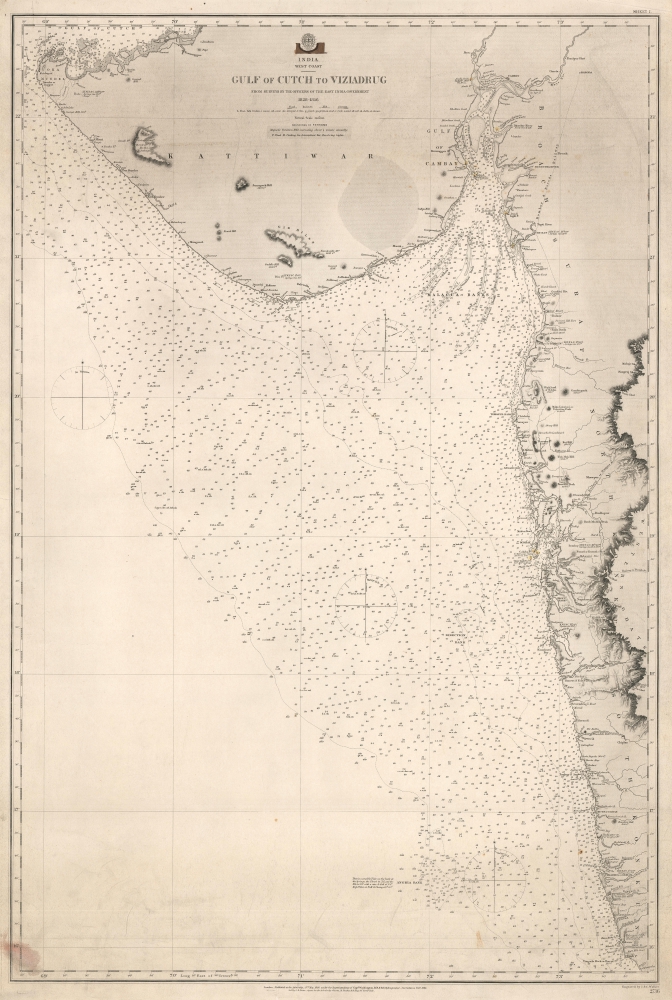 Provides an incredible level of detail along the Gujarati Coast and the coast of Majarashtra including Mumbai.
$550.00

This is an 1863 British Admiralty nautical chart or maritime map of the Gujarati coast and the coast of Maharashtra including Mumbai / Bombay. The map depicts the region from the Gulf of Kutch to Vengurla (Vingorla) and from the Arabian Sea to the Western Ghats. Myriad depth soundings, given in fathoms, are indicated up to the continental shelf. An incredible level of coastal detail is provided, with coastal towns, cities, forts, lakes, rivers, and other landmarks identified. Elevations for mountains and hills within sight of the coastline are also noted, allowing the mariner to better situate themselves in relation to the coastline. Mumbai (Bombay), Khambhat (Cambay), and Vijaydurg (Viziadrug) are among the labeled coastal cities. The Bombay and Baroda Railway, the Railway to Nagpur, and the Railway to Punnah are labeled.

This map was published by the British Admiralty under the Superintendence of John Washington in 1863. An example of the 1860 edition is catalogued in the OCLC as being part of the collection at the British Library.


John Washington (1800 - September 16, 1863) was a hydrographer, Royal Navy officer, and founding member of the Geographical Society of London. In May 1812, Washington joined the Royal Navy and in November 1814 entered the Royal Naval Academy. He graduated from the Academy in May 1816 and on January 1, 1821 was promoted to lieutenant. He was one of the original members of the Royal Geographical Society and from 1836 until 1841 served as its secretary. He gained the rank of captain on March 16, 1842. Over the course of his career, Washington served on nearly one dozen different Royal Navy vessels. He became Hydrographer of the Navy following the resignation of Sir Francis Beaufort in 1855. He died at Le Havre on September 16, 1863. Learn More...