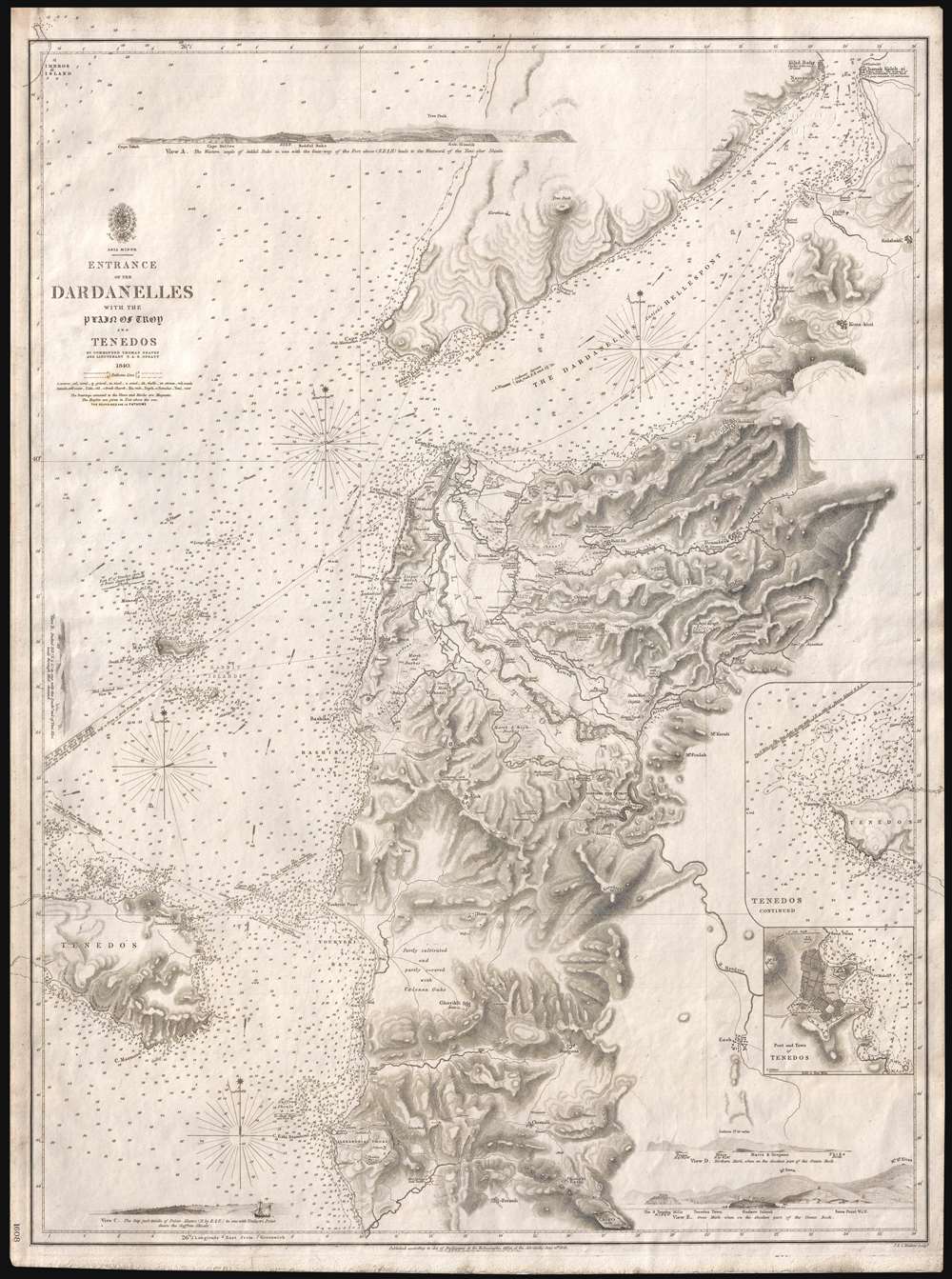 Spratt's Map' that led directly to the rediscovery of the lost Homeric city of Troy!
$2,500.00

Known as 'Spratt's Map', this is a most intriguing 1844 British Admiralty chart or map of the Entrance to the Dardanelles and the Troada or Plain of Troy. Compiled by Royal Navy officers Thomas Abel Brimage Spratt and Thomas Graves, this map played a significant role in the discovery of Tory. While this, like most early Admiralty charts can be admired for its supreme maritime detail and accuracy, the map's most intriguing quality is its extraordinary inland detail covering the eastern quarter of the Troada, including the Plain of Troy. Here, Graves and Spratt have left aside their usual nautical survey work to put the resources and training of the British Hydrographic Office to work on a far more important matter - the search for the ruins of lost Troy.

The Search for Troy

The search for the lost city of Troy, as described in the Homeric epic, The Illiad was a subject of scholarly and gentlemanly speculation since late classical times. Lacking a definitive location for the great city of the Trojan War, many scholars attributed it to fiction. Nonetheless, early modern gentleman travelers and scholars, including Pierre Belon (1517 - 1564) and Pietro Della Valle (1586 - 1652), among others, sought for the city. By the late 18th century scholars had at last begun to triangulate a location, focusing on the plains of the River Mendere (Scamander or modern Karamenderes). It was the French traveler Jean Baptiste LeChevalier (1752 - 1836) who first pointed to general area. The Scottish journalist Charles Maclaren (1782 - 1866) further refined the location to a specific site and is now considered to be the first to identify Troy, but did not peruse excavations to verify his claim. The next major survey of this region is the present Admiralty work compiled by Spratt and Graves. This work formed the foundation for Frank Calvert's 1866 survey of the region around Hisarlik, and informed the subsequent formal excavations of the German archeologist Heinrich Schliemann (1822 - 1890) - whose dig merely followed the directions on Spratt's Map! Schliemann's excavations, between 1871 and 1879, yielded the first concrete proof that Troy had indeed been discovered, but were criticized by later archeologists as careless and unscientific.

Graves and Spratt looked at the Plain of Troy and the Troada in general, not merely from a scholarly perspective, but being military men, from a perspective of where one could naturally construct a near impregnable walled city - as Homer described Tory. Quoting Schliemann in his book on the discovery and excavation of Troy,Ilios: The City and Country of the Trojans: the results of researches and discoveries on the site of Troy and through the Troad in the years 1871-72-73-78-79 (page 187),

I cannot refrain from making on this occasion a warm acknowledgment to both Admiral Spratt and Commander Graves for the Immense service they have rendered to science by their most excellent map of the Troad. Nothing has escaped the close scrutiny they gave to every spot, in order to produce as complete a map of the plain and the hills falling into it as was possible, as a basis for the future study of Homeric Topography. For all previous maps were mere compilation of many travelers' journeys, and so in many points very erroneous and confusing, as well as deficient in giving he necessary geographical details. Every ruin, however small, is marked on this map, which can hardly ever ben excelled.

Indeed, the quality of the Graves / Spratt survey of this region is nothing short of astounding. They identify every ruin, large and small bridges, cemeteries, topography, individual buildings, heaps of sand, places where broken pottery shards were discovered, and more… In was in fact was this map that convinced Schliemann to begin digging in the exact location here noted as 'Supposed Site of Troy,' leading to the discovery of Troy.

This map was published by the British Admiralty's Hydrographic Office in 1844 based upon surveys conducted by Spratt and Graves between 1839 and 1840. It was published in 1844 by the firm of J. and C. Walker, London. The present example is the first edition with subsequent vastly revised editions issued at various points well into the 20th century. We have identified other examples of the 1844 first edition of this map at the British Library, the National Archives at Kew, and at the National Library of Israel. No other first edition examples are known.

Thomas Abel Brimage Spratt (May 11, 1811 - March 12, 1888) was an English Royal Navy officer, hydrographer, and geologist active throughout the 19th century. Spratt was born in Woodway House, a gentlemanly estate in East Teignmouth, Devon, England. He was the eldest surviving son of Royal Navy Commander James Sprat, a hero of the Battle of Traflagar. He joined the Royal Navy in 1827, at 16, and was taught surveying on board the HMS Victory. Spratt was assigned to survey the Mediterranean, working with various officers, but most notably Thomas Graves, with whom he produced a revolutionary map of the Troada, subsequently known as 'Spratt's Map,' which led directly to Schliemann's discovery of Troy. Subsequently he befriended Edward Forbes, an English naturalist, with whom he published Travels in Lycia. Spratt was elected a Fellow of the Royal Society in recognition of the work. He was Kent's Commissioner of Fisheries from 1866 to 1873; and acting conservator of the River Mersey from 1879 until his death at Tunbridge Wells in 1888. Learn More...


Thomas Graves (1802 - August 28, 1856) was a Northern Irish office in the Royal Navy and gentleman scholar. Graves was born in Belfast and joined the Royal navy in 1816. He was promoted to lieutenant in 1827 by Philip Parker King of the HMS Adventure, under whom he learnt surveying at the South America Station. He was promoted to Lieutenant-Commander in 1836, given command of the HMS Mastiff, and assigned to survey work in the Mediterranean. He was joined on this post to Thomas Abel Brimage Spratt (May 11, 1811 - March 12, 1888), with whom he mapped the Troada is stunning detail in search of the, then lost, city of Tory. In 1840 the Pair produced 'Spratt's Map,' as it came to be known, which led directly to Schliemann's discovery of Tory. Graves' next ship, from 1841, also in the Mediterranean, was as Commander of the HMS Beacon. With the Beacon, Graves was assigned to transport the Xanthian Obelisk from the Lycian coast to England. In 1846 he was assigned to command the HMS Ceylon, again in the Mediterranean. In 1853 he was made Superintendent of Ports at Malta. Graves died in Malta on August 28, 1856, from a wound inflicted by Maltese boatman Giuseppe Meli, who was later tried for Graves's murder. Learn More...