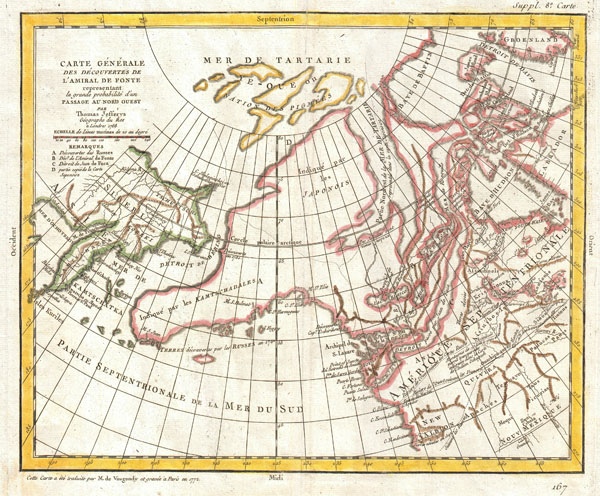 A truly fascinating 1772 map of the northwestern parts of North America by Robert de Vaugondy. Essentially depicts the north eastern parts of Asia, speculations on northwestern America and Admiral De Fonte's mythical conception of a Northwest Passage. Heavily based upon earlier work by Thomas Jefferys, Thomas Swaine Drage, Gerhard Muller, and James De Lisle. Vaugondy prepared this map prior to the voyages of James Cook to this region. Around this time Europe was rampant with speculation both regarding the existence of a Northwest Passage and the northwestern parts of America in general. The discoveries of Admiral de Fonte and Juan de Fuca though now known to be entirely mythical, inspired the European imagination.

Barthlomew de Fonte was supposedly a Spanish Admiral who, sailing up the Pacific coast c. 1640 discovered a series of gigantic lakes, seas, and rivers heading eastward towards the Hudson Bay. Supposedly, upon one of these great inland lakes, he met with a ship from Boston that claimed to have come through a Northwestern Passage. De Fonte's story appeared in a short lived 1706 English publication entitled 'Memoirs of the Curious.' The story inspired no less than Joseph-Nicholas de L'Isle, younger brother of the better known Guilleme de L'Isle. Joseph-Nicholas, at the time, was employed by the Russian Tzar Peter the Great in the compilation of Russian surveys and discoveries in Siberia and the extreme northeast of Asia. When he published his somewhat accurate map of northeast Asia, he paradoxically decided to include with it an entirely speculative map of North America based largely on De Fonte's letter. De L'Isle's mantle was later taken up by Jefferys, another ardent supporter of the Northwest Passage theory, in his own map of the region, which was, ultimately, the inspiration for this map by Vaugondy.

In accord with De Fonte's suggestions this map displays the strait of Juan de Fuca continuing inland past the large lakes of Velasco, Belle and De Fonte to communicate with the Baffin and Hudson Bay. There are also a series of rivers and waterways connecting the lakes themselves to an outlet in the Arctic. Based upon Russian reports, Vaugondy rename the 'Straits of Ainan,' the 'Detroit de Bering,' paying homage to the great Russian navigator. Anian itself has been moved southward nearer to the Strait of Juan de Fuca. Anian is a term derived from the journals of Marco Polo and first appeared in 1561 on a map by teh Venetian cartographer Bolognini Zaltieri. Later it appeared in a John Donne poem, 'Anyan if I go west by the North-West passage.' However, it was interpreted as the Bering Strait by cartographers, successfully transitioning it from the realms of poetry to cartography. Anian presupposed the existence of a Northwest Passage and, as such, was entirely mythical, though the lands that are now Alaska long bore that name. Further south still we find Quivira, one of the legendary northern American Kingdoms of Gold. Nearer to Russia the Aleutian Islands have been consolidated into a large peninsular landmass extending eastward towards Asia. In the extreme north, between 80 and 60 degrees of latitude is an archipelago, presumably discovered by the Japanese, and purportedly inhabited entirely by pigmies.

This entire map is in sharp contrast to De L'Isle map of the same region. In an alternative to the Jefferys map, De L'Isle imagined a slightly more distorted picture of the extreme northeast divided into a number of great islands with gigantic Bays and inland seas heading eastward towards Hudson Bay. These two disparate cartographic interpretations of the De Fonte story inspired considerable debate among European intellectual circles until the matter was finally put to rest by the expeditions of James Cook. Nonetheless, this is altogether fascinating map of the Northwest Passage and the American west and a must for any serious collection dedicated to this region.

This map is part of the 10 map series prepared by Vaugondy for the Supplement to Diderot's Encyclopédie, of which this is plate 8. This seminal map series, exploring the mapping of North American and specifically the Northwest Passage was one of the first studies in comparative cartography.

Pedley, Mary Sponberg. Bel et Utile: The Work of the Robert de Vaugondy Family of Mapmakers. 455. Kershaw, Kenneth A., Early Printed Maps of Canada, 1231. Wagner, Henry R., The Cartography of the Northwest Coast of America to the Year 1800,, Vol II, 637. Portinaro, Pierluigi and Knirsch, Franco, The Cartography of North America 1500-1800, #159. Phillips, P.L. (Atlases) 1195
Looking for a high-resolution scan of this?