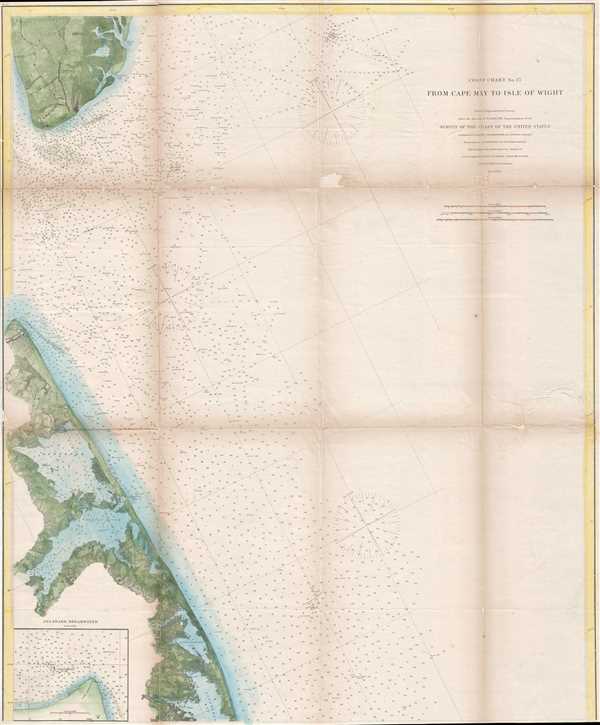 Features an inset map of Cape Henlopen and the Delaware Breakwater.
$250.00

An unusual 1866 U.S. Coast Survey nautical chart or maritime map of the entrance to Delaware Bay. The map depicts the entrance of the bay from Cape May, New Jersey to Assawoman Bay, Delaware. The map offers countless depth soundings throughout as well as excellent coastal detail, especially in Cape May and along Rehoboth Bay, Indian River Bay, and Assawoman Bay. An inset in the lower left corner focuses on the Delaware Breakwater near Cape Henlopen. Presumably this is part of a larger set that extends southwards as far as the Isle of Wight. We have not seen the other charts.

The triangulation for this chart was accomplished by E. Blunt, J. E. Johnstone and J. Farley. The topography is the work of J. J. S. Hassler and G. D. Wise. The Hydrography was completed by parties under the commands of T. R. Gedney, G. S. Blake, G. M. Bache, S. P. Lee, and R. Bache. The whole was compiled under the superintendence of A. D. Bache, one of the most influential and prolific heads of the U.S. Coast Survey.