1854 Pharoah and Company Map of the Krishna District or Masulipatam, Andhra Pradesh, India 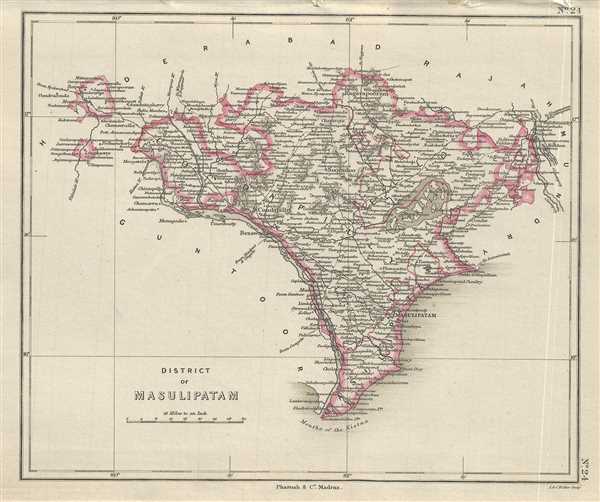 1854 Pharoah and Company Map of the Krishna District or Masulipatam, Andhra Pradesh, India

Early map of the Krishna District in Andhra Pradesh, India - The first headquarters of the British in India.

This is a nice example of Pharoah and Company’s 1854 map of the Masulipatam or Krishna District on Andhra Pradesh, India. It covers from the mouth of the Krishna River north to the Godavari River and Raghavapuram and notes important towns, roads, rivers, and topography. The first headquarters of the British was in Masulipatnam when they established their settlement there in 1611 and built their factory here. The headquarters would later move to Madras in 1641, but the town would remain an important trading port for the French, British and Dutch ships.

This map was engraved by J. and C. Walker and issued as plate no. 24 by Pharoah and Company in their 1854 Atlas of Southern India.