1854 Pharoah and Company Map of the District of Nellore, Andhra Pradesh, India 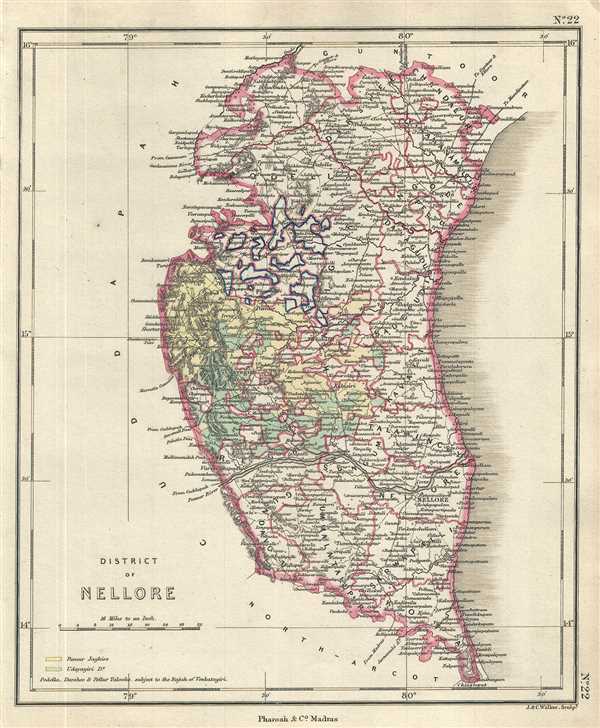 1854 Pharoah and Company Map of the District of Nellore, Andhra Pradesh, India

This is an example of Pharoah and Company’s 1854 map of the Nellore District in Andhra Pradesh, India. The map extends from the Pulicat Lake north to Addanki. Notes important towns, roads, rivers, and topography. In the early 19th century, the district was taken over from the Nawabs by the British and was made part of the Madras Presidency of British India. This map was engraved by J. and C. Walker and issued as plate no. 22 by Pharoah and Company in their 1854 Atlas of Southern India.

John Walker, Alexander Walker and Charles Walker, known collectively as J & C Walker (fl. 1820-95), were engravers, draughtsmen and publishers working through the 19th century. They had several offices 47 Bernard St Russel Sq (from 1830 - 1836), 3 Burleigh St Strand (from 1837 to 1840), 9 Castle St Holborn (from 1841 to 1847) and 37 Castle St Holborn (from 1848 to 1875). The firm is best known for its work in conjunction with the maps issued by the Society for the Diffusion of Useful Knowledge or, as it is more commonly known, the S.D.U.K. However, they also engraved a large corpus of work for the British Admiralty , as well as issuing several important maps of India and multiple issues of the Royal Atlas.