1854 Pharoah Map of the District of Tanjore, Tamil Nadu India (with Thanjavur) 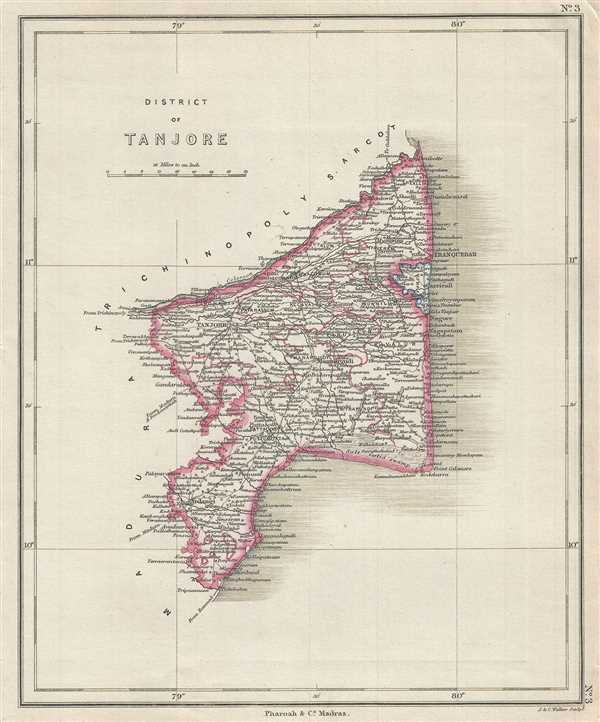 1854 Pharoah Map of the District of Tanjore, Tamil Nadu India (with Thanjavur)

Beautiful map of the Tajore district in Tamil Nadu, India, home of the Tanjore paintings.
$250.00

This is a nice example of the 1854 map of the District of Tanjore in the modern day state of Tamil Nadu, India, issued by Pharoah and Company. It covers from Mimbesel (Mimisal) north to Pazhaiyar or the entrance of the Kollidam River. Includes the towns of Tanjore (Thanjavur), Pattacotte (Pudukkottai), Manargudi, etc. The map also notes important roads, lakes, rivers and topography.

The Tajore district came into existence when the Tanjavur Maratha ruler ceded his kingdom to the British East India Company. Originally the center of the Chola Dynasty and became one of the richest districts of the Madras Presidency. It is home to many of the temples built during the Chola Dynasty and is famous for the Tanjore style paintings.

This map was engraved by J. and C. Walker and issued as plate no. 3 by Pharoah and Company in their 1854 Atlas of Southern India.