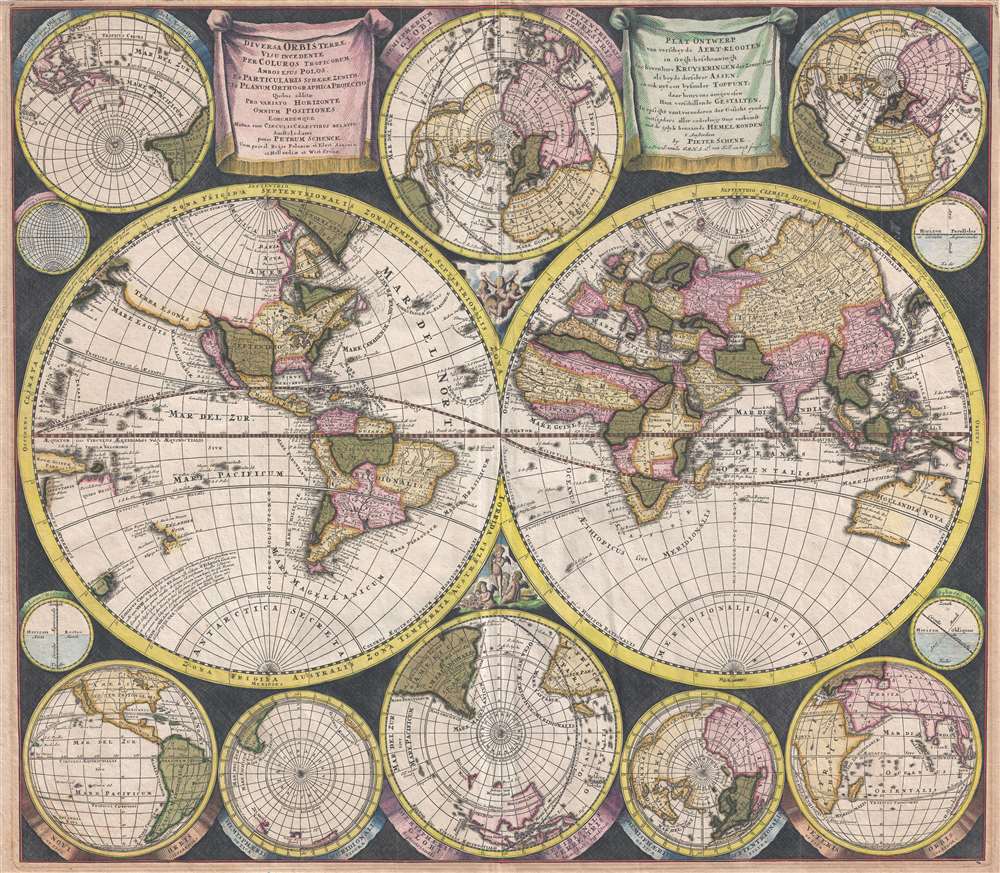 A milestone in the history of cartography marking a transition to the more `rational' 18th century approach.

This is a 1706 Pieter Schenk map of the world in a double hemisphere projection, with the western hemisphere on the left and the eastern hemisphere on the right. Based on Carel Allard's map of 1696, this map, along with the Allard map, represent a noteworthy shift away from the traditional decorative margins populated by mythological figures and references toward a much more scientific appearance. Here we find only two small groups of cherubs placed in between the two largest hemispheres, with the decorative border replaced by eight smaller projections depicting the world from different angles and four even smaller diagrams.

Several intriguing aspects of cartography are present here, including California as an island and Terra Esonis, a vestige from the previous century believed to be a continuous land bridge from the semi-mythical Strait of Anian to Asia. It is also important to note the presence of the mythical Laguna de Xarayes and the fact that Australia, depicted in the lower right portion of the Eastern Hemisphere, is not complete. This incomplete depiction of Australia also appears in the smaller map in the upper left corner, and the map in the middle of series of five maps along the bottom border. In the latter two, New Zealand is illustrated and labeled, though only partially. It is also of note that no Great Southern Continent is included, as it was believed that the existence of a large southern continent was necessitated by Asia to balance the globe.

Baja California was subsequently discovered in 1533 by Fortun Ximenez, who had been sent to the area by Hernan Cortez. When Cortez himself traveled to Baja, he must have had Montalvo's novel in mind, for he immediately claimed the 'Island of California' for the Spanish King. By the late 16th and early 17th century ample evidence had been amassed, through explorations of the region by Francisco de Ulloa, Hernando de Alarcon and others, that California was in fact a peninsula. However, by this time other factors were in play.  Francis Drake had sailed north and claimed Nova Albion (identified here on the northwest coast of California Island) near modern day Washington or Vancouver for England. The Spanish thus needed to promote Cortez's claim on the 'Island of California' to preempt English claims on the western coast of North America. The significant influence of the Spanish crown on European cartographers, especially the important French house of Sanson, in the form of the presently offered map, caused a major resurgence of the Insular California theory.

This map was created by Pieter Schenk and published in 1706.