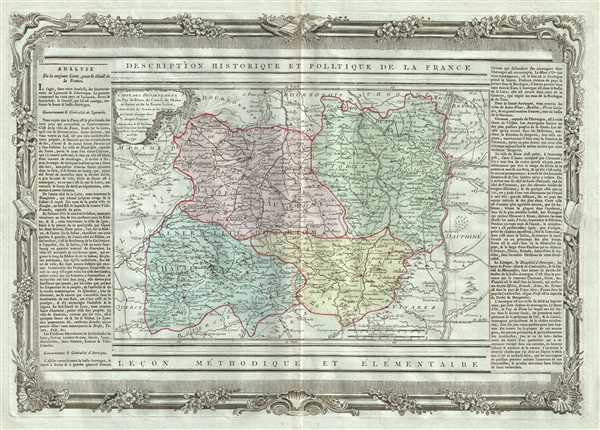 This is a lovely 1790 map of the regions of Auvergne and Rhone-Alpes in France by the French cartographer Louis Brion de la Tour. It covers the French departments of Puy-de-Dome, Cantal, Haute Loire, Loire, and Rhone. Color coding divides the map according to region and notes numerous towns, cities, rivers, forests, mountains and other topographical features.

This mountainous region is one of the leading cheese regions in France. Here you can find a wide variety of cheeses, from Cantal, a pressed cheese, to a number of Bleu Cheeses, to local specialties, such as Savaron and Bleu de Laqueille. The region is also known for its spectacular volcanic rock formations. The department of Rhone in the Rhone-Aples region produces the French AOC wine, Beaujolais. This wine is generally made of the Gamay grape which has a thin skin and is low in tannins.

A beautifully engraved title cartouche adorns the top left quadrant of the map. To the left and right of the map are paste downs of French text with remarks and description of the map. Surrounding the whole is an elaborate decorative border featuring floral arrangements. This map was issued as plate no. 15 in Desnos’ Atlas National de France, bound with the most deluxe edition of his 1786 Atlas General Methodique et Elementaire, Pour l’Etude de la Geographie et de l’Histoire Moderne.