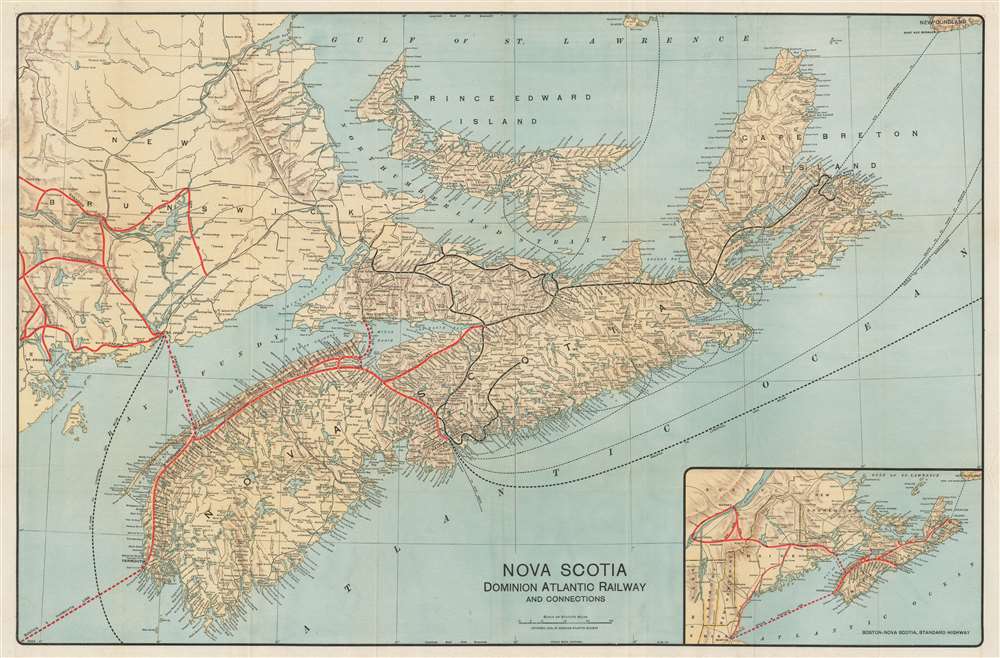 Highlights a very popular tourist rail route in Nova Scotia popularized by a love for Longfellow's epic poem Evangeline, A Tale of Acadie.
$250.00

This is a 1918 Poole Brothers map of Nova Scotia and the routes of the regional railroads. Depicting the region from New Brunswick to Cape Breton Island, the Dominion Atlantic Railway and the Canadian Pacific Railway (which owned the Dominion Atlantic) are highlighted by thick red lines, while Canadian government railways are illustrated by black lines. Every stop along the rail lines in Nova Scotia are labeled, with the major stations, such as Yarmouth, Digby, and Halifax, identified using bold block letters. Steamship routes, including those connecting different parts of Nova Scotia, and Nova Scotia and New Brunswick, are marked by dashed lines. Steamship routes to England, the United States, and the West Indies are also illustrated and labeled.

Founded in 1894, the Dominion Atlantic Railway (DAR) emerged from the 'merger' of the Windsor and Annapolis Railway and the Western Counties Railway. While called a merger, it was in fact a buyout by the Windsor and Annapolis, which was the larger of the two. This merger connected Yarmouth and Halifax, with a gap between Annapolis Royal and Digby, which was soon closed with the help of the Canadian government. The DAR operated passenger service on its main line and branches from the outset, including the famous Flying Bluenose, for which the railroad purchased the first Pullman cars in Canada. Due to the popularity Henry Wadsworth Longfellow's epic poem Evangeline, A Tale of Acadie, the DAR soon incorporated a depiction of Evangeline and the text 'Land of Evangeline Route' into their logo. An extraordinarily diversified enterprise, as the DAR began to see ridership explode, eventually reaching over 200,000 a year, they opened their own chain of hotels, including the Digby Pine Resort and operated their own steamship lines.

The Canadian Pacific Railway bought the DAR in 1911 but allowed the company to maintain its operational independence and corporate identity for decades, making it, according to Shirley Woods, 'the most famous railway in the province'. The DAR encountered difficulties during World War I but played a critical role in the movement of troops. During the 1930s, the DAR transported millions of barrels of apples a year from the Annapolis Valley, with over 150 apples warehouses eventually constructed along DAR lines. After again playing an important role in the transportation of troops during World War II, the DAR faced some significant challenges in the post-war years, with the lines being progressively abandoned during the 1970s and 1980s. Today, very little traffic moves along these lines. Today, several of the DAR stations have been preserved as libraries, restaurants, and museums. Only one DAR steam locomotive survives and is part of the collection at the Canadian Railway Museum in Delson, Quebec. Other cars, including a business car and a passenger coach, are part of other museum collections in Canada.

This map was created by Poole Brothers of Chicago and published by the Dominion Atlantic Railway in 1918. It appears this map was published in several editions, as a 1930 edition is part of the collection at the University of Toronto. That said, the maps are extremely rare, as no other examples are catalogued in the OCLC and we have found no other examples on the private market.