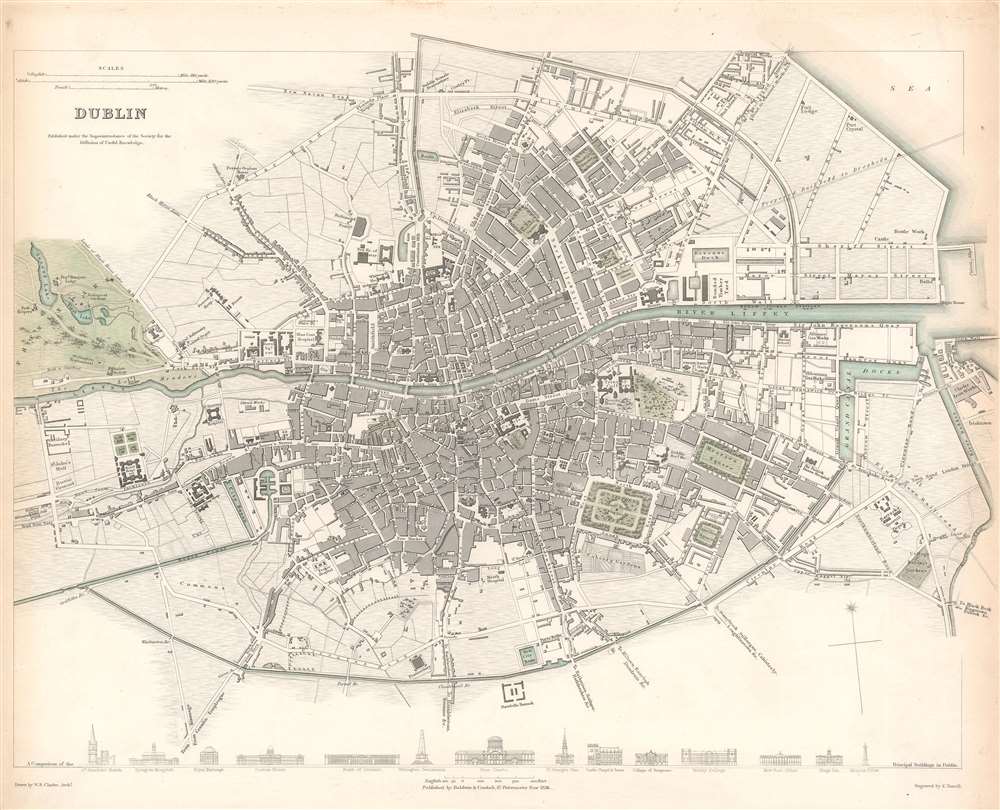 This is a lovely 1836 map of the city of Dublin, Ireland issued by the Society for the Diffusion of Useful Knowledge, or S.D.U.K. It depicts the city of Dublin, at the time confined mainly within the Circular Road located at the mouth of the Liffey River, including part of Phoenix Park. Highly detailed, the map notes individual streets, buildings, parks, squares, and docks. Trinity College is labeled to the right of center, with several hospitals, the military barracks, and the College Botanic Gardens among the other identified locations around the city. Artistic profile views of fourteen of the most important buildings of the city, such as St. George's Church, the Royal Exchange, St. Patrick's Church, and Nelson's Pillar.

This map was created by William Barnard Clarke, engraved by E. Turrell, and published by Baldwin and Cradock for the Society for the Diffusion of Useful Knowledge in 1836.


William Barnard Clarke (1806 - 1865) was an English cartographer, architect, numismatist, literary translator, art collector, and archaeological writer. Born in Cheshunt, Hertfordshire, Clarke attended St. Paul's School in London beginning in 1817 at the age of 10. It is said that as a youth Clarke spent a substantial amount of time in Rome studying architecture and also spent time studying the ruins of Pompeii. He was also instrumental in founding the Architectural Society of London and was named President of the Society in 1831. As a cartographer, Clarke was an active member of the Society for the Diffusion of Useful Knowledge and created a Celestial Atlas for the Society as well as city plans of Dublin, Milan, Warsaw, Paris, and London among several others. Clarke married Charlotte Brooks at St. Andrew Holborn in London on July 1, 1830.