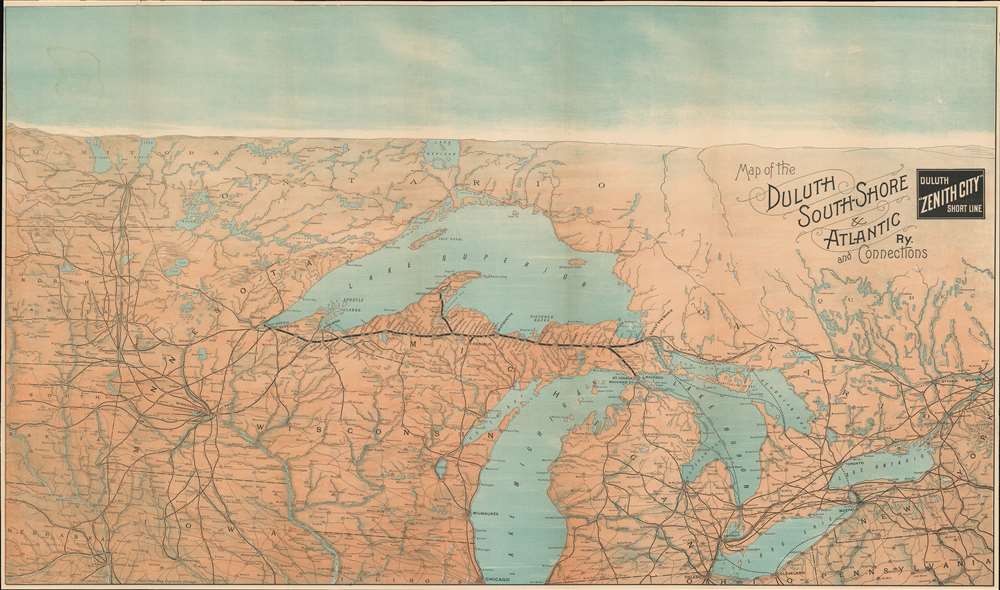 Stunning view and railroad map of the Great Lakes.

A stunning c. 1890 chromolithograph railroad map and view of the Great Lakes region. Issued to illustrate the route of the Duluth South-Shore and Atlantic Railway, the map covers from Montreal to the Dakotas, including all five Great Lakes, and most of Michigan, Wisconsin, Minnesota, North Dakota, and South Dakota. The map takes unusual view/map form, commonly seen in New England and European maps, but uncommon in maps of the American Midwest. While the map itself is presented on a uniform scale, the cartographer uses shading and a horizon line to suggest view-like qualities.

The Duluth, South Shore and Atlantic Railway was founded in 1886 by the Detroit tycoon James McMillan. The railroad followed the development of hematite mines in the Upper Peninsula in the 1850s. This led to the construction of numerous small private railroads and spur lines. McMillan consolidated and merged many of these lines starting the early 1880s. Two years after its founding, in 1888, the DSSA was acquired by the Canadian Pacific Railroad, who financed additional trackwork as far as Duluth. The DSSA is still owned by the Canadian Pacific. Parts have been integrated into the Soo Line Railroad, while other sections are operated as a heritage line. Running through the stunning Upper Peninsula, the DSSA is one of the most beautiful railroad lines in the United States.

This promotional map was issued by the railroad publisher Poole Brothers, probably on behalf of the railroad itself. It is a 2-color chromolithograph. The map is uncommon, with the OCLC identifying only 5 institutional holdings.

Backed on archival tissue. Some wear on original fold lines.