1753 Vaugondy Map of the Maine, Perche, Touraine and Anjou, France 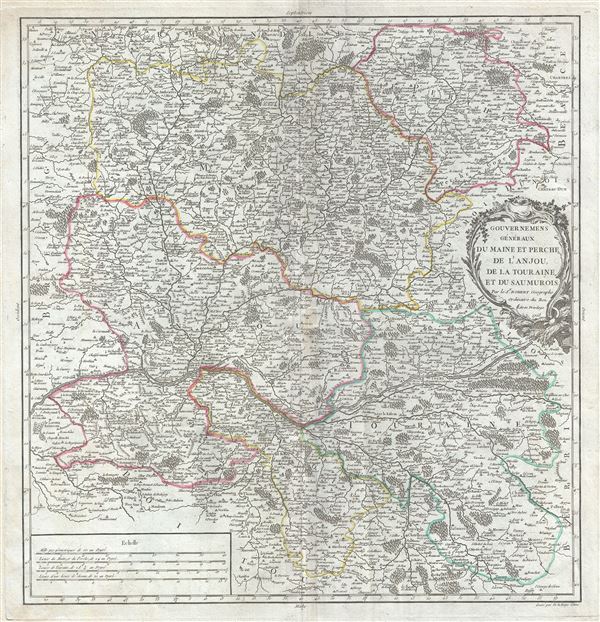 1753 Vaugondy Map of the Maine, Perche, Touraine and Anjou, France

This is a fine 1753 map of the French winemaking regions of Maine, Perche, Touraine, Anjou and Saumur by Robert de Vaugondy. It covers from Fougeres east to Chartres and from Domfront south as far as Parthenay and depicts the whole or parts of the modern day departments of Mayenne, Sarthe, Eure-et-Loir, Indre-et-Loire, Maine-et-Loire and Vienne. The map renders the entire region in extraordinary detail offering both topographical and political information with forests and mountains beautifully rendered in profile. The important cities of Le Mans, Tours and Angers are identified.

This region, which hugs the Loire Valley, is famed for is beautiful Chateaux and for producing some of the world's finest wines. Maine-et-Loire itself is home to the largest vineyard in the Loire Valley. It is also known for its production of Port-Salut, a distinctive, semi-soft cow's milk cheese. Indre-et-Loire is known for its production of Chenin Blanc, a white wine grape with a high acidity, and wide variety of goat cheeses, while the famous Chartres Cathedral is located in the Eure-et-Loir region.

The map includes a beautifully engraved title cartouche near the right border. This map was drawn by Robert de Vaugondy in 1753 and published in the 1757 issue of his Atlas Universal.

Rumsey 3353.027. Pedley, Mary Sponberg Belle et Utile: The Work of the Robert de Vaugondy Family of Mapmakers, 108.
Looking for a high-resolution scan of this?