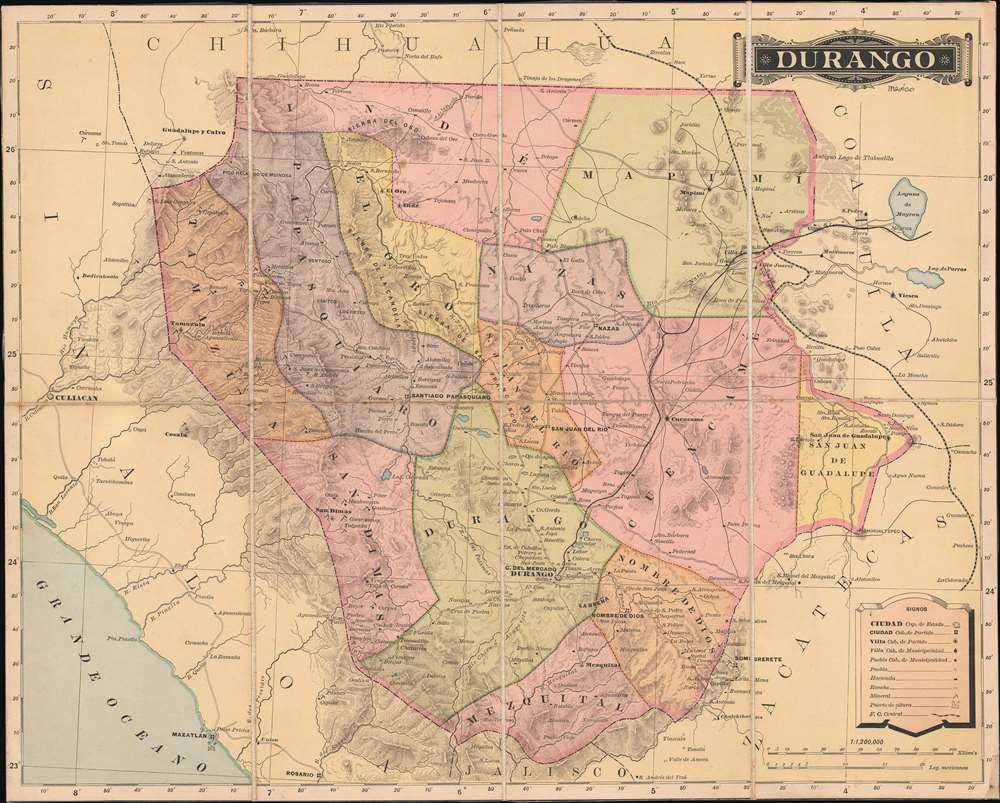 This is an 1886 Antonio Garcia y Cubas map of Durango, Mexico. When it was published, this was the best generally obtainable map of Durango - then a center of mineral wealth. Note the little pickaxe icons scattered throughout - indicators of gold, silver, and copper deposits.

Durango was a mining hub from the 16th century, when the Spanish recognized the rich gold, silver, and copper resources in the Sierra Madres. By the late 19th century, American and British mining interests, as well as solo American prospectors, moved into the region, taking control of much of the production. Part of this story was documented in the classic 1948 Humphrey Bogart western, Treasure of the Sierra Madre, an adaptation of B. Traven's 1927 novel of the same name. In this case, a manuscript notation on the verso states that this example was 'from Mr. Eichhorn's mining activities'. Josef K. Eichhorn (1862 - 1941), a German-American prospector, was one such prospector. Like most foreign mining claims in Durango, Eichhorn's investments were seized and/or destroyed by the Maderismos during the early days of the Mexican Revolution (1910 - 1920). Following the Revolution, in the Convention of September 10, 1923, Mexico agreed to compensate foreign interests whose properties were destroyed. To attain recompense, applicants were required appeal to the U.S. Secretary of State, providing sufficient evidence of their claims and loss. The English note on the back, 'from Mr. Eichhorn's Mining activities', suggests this map was prepared thus to represent part of his relief filing, which was granted in 1935.

This map was prepared and issued by Antonio Garcia y Cubas, the Padrino of Mexican cartography. The present example was published in the Atlas Geográfico, Estadístico e Histórico de la República Mexicana as well as separately, dissected, and mounted on linen, as here. This map is well represented in institutional collections.

Antonio Garcia y Cubas (July 24, 1832 - February 9, 1912) was a Mexican cartographer, writer, engineer, and geographer active in Mexico City in the second half of the 19th and the early 20th centuries. He is considered Mexico's first great geographer. Garcia y Cubas was born in Mexico City. He was orphaned at birth and was raised by is aunt. When he turned 18, he enrolled in the Dirección General de Industria, a government sponsored technical school. There he studied engineering and geography, which he further pursued at the Colegio de San Gregorio, Colegio de Ingenieros. He graduated with honors in geography and from 1856, became a member of the Sociedad Mexicana de Geografía y Estadística. His geographical work earned him the Order of Guadalupe, a Mexican second empire honorific, directly from the Emperor Maximillian. He published several atlases, including his important Atlas Geográfico, Estadístico e Histórico de la República Mexicana, and multiple decorative chromolithograph Atlas Pintoresco e Históricos covering Mexico, Cuba, Spain, and elsewhere. Today his work is scarce and highly desirable. Learn More...