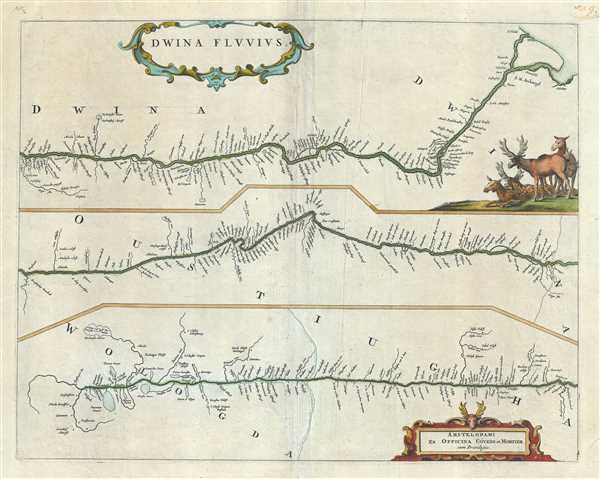 Beautiful map depicting the flow of the Northern Dwina River in Russia.

This is a beautiful 1721 map of the Northern Dvina River in northern Russia by Frederik De Wit. The map is divided into three sections to follow the course of the river from its source in the Vologod Province as it empties into Dvina Bay of the White Sea near Archangle (Arkhangelsk). Along the way, the map notes several smaller tributaries and towns.

The Northern Dvina River was an important waterway used for fur trading. The Dutch first arrived in the North Sea near Arkhangelsk in the late 16th century. The river was later used by the Muscovy Company as the main trading route connecting Central Russia with Arkhangelsk. The Muscovy Company would monopolize the English-Russian trade until 1698, after which the Dutch returned as dominant merchants in the region. Through all this, the Northern Dvina River remained an important trading route until the construction of the railway between Vologda and Arkhangelsk in the late 19th century. The Dvina River is today used mainly to transport timber.

Very good. Minor wear along original centerfold. Some cracks near margins and borders. Professionally flattened and backed with archival tissue.