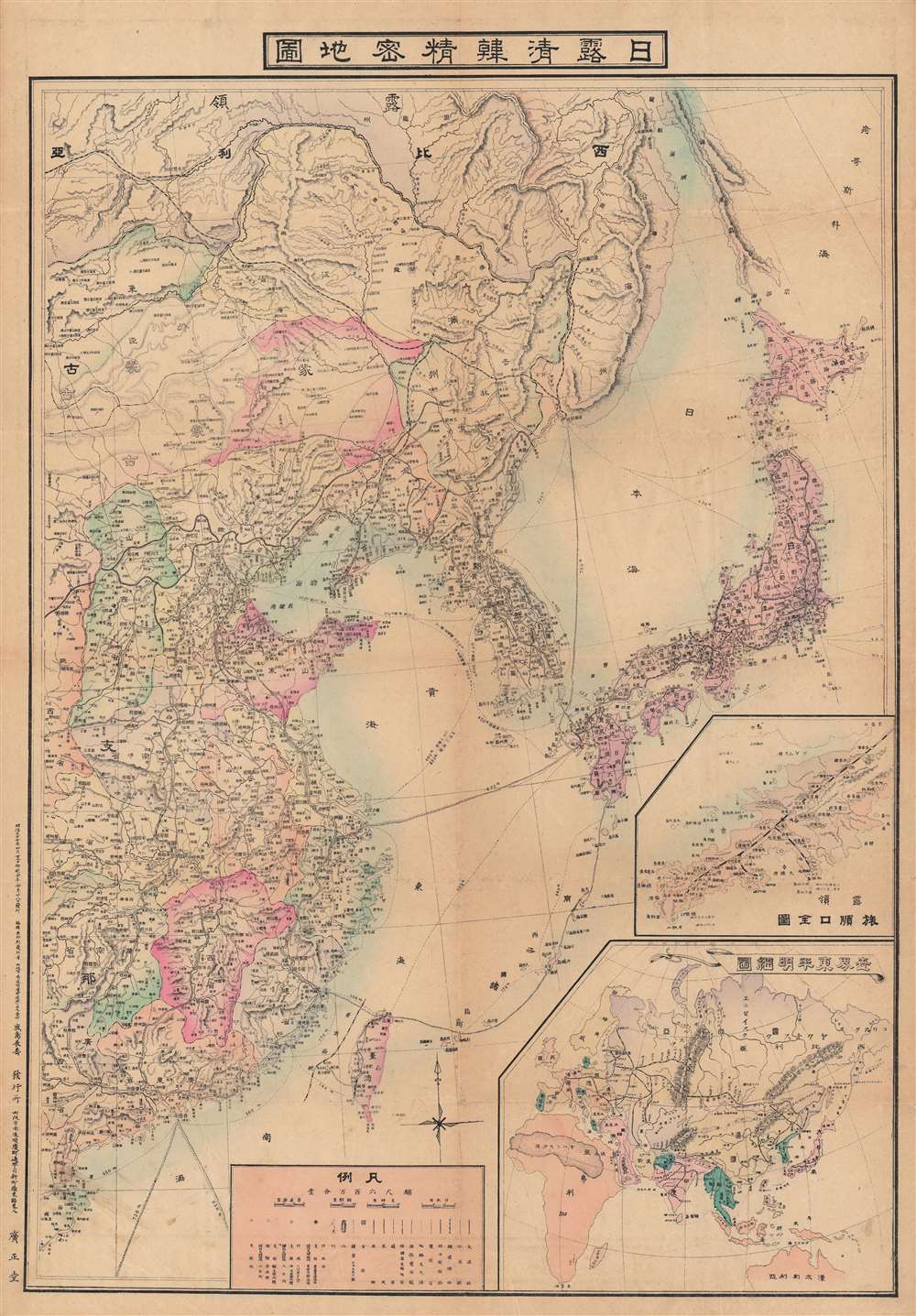 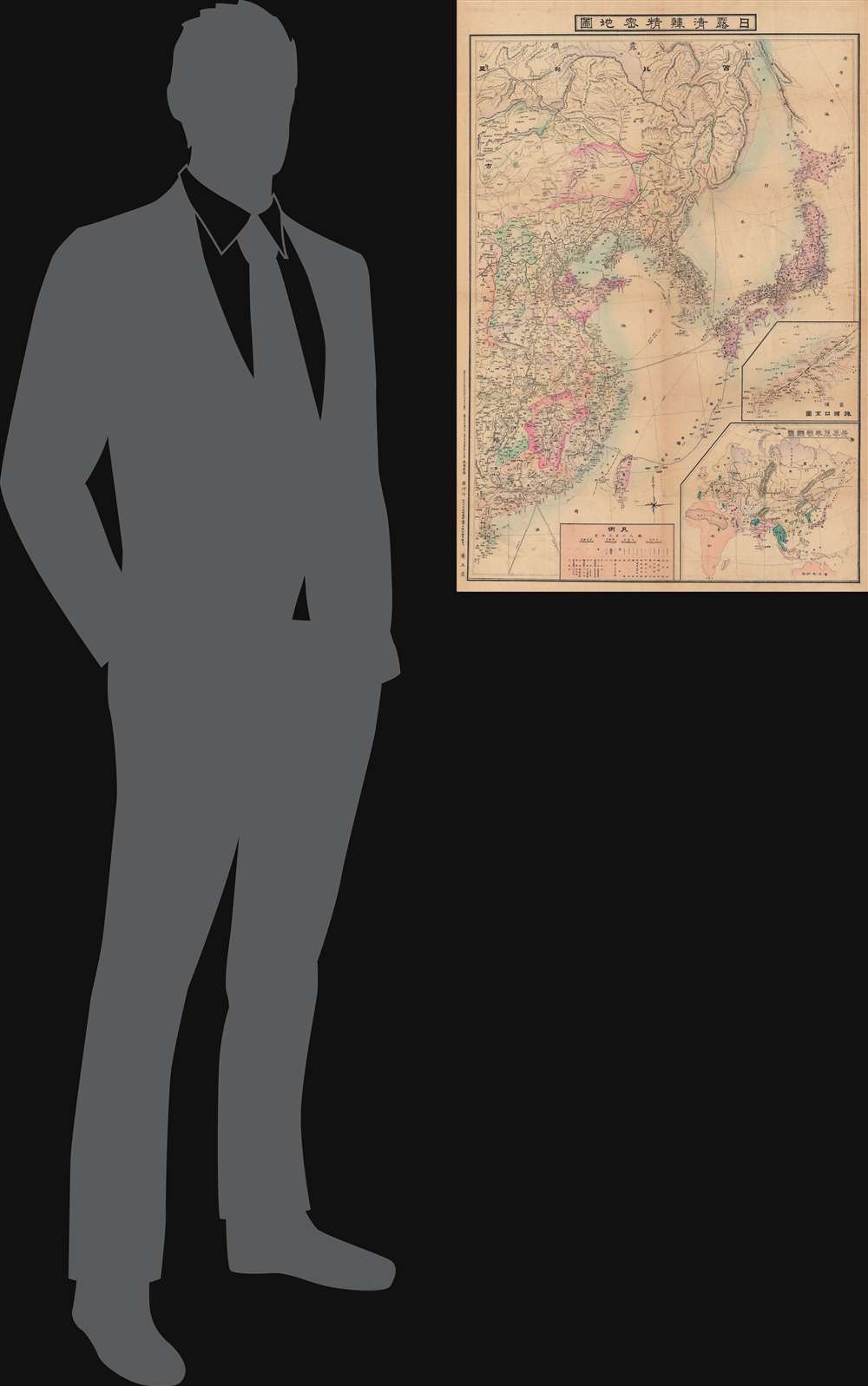 Illustrates the Russo-Japanese War on a local, regional, and global scale.
$850.00

This is a visually impressive 1904 Kashima Nagatoshi (鹿島長壽) map of East Asia, made in the opening months of the Russo-Japanese War. Although it clearly alludes to the ongoing conflict, this map is somewhat unusual for also placing the convlict in Northeast Asia in a much wider regional and global context.

Japan experienced an outpouring of publications during the Russo-Japanese War, including numerous maps. The present map accomplishes much of what was prevalent among these publications because it focuses on the theater of war, especially in the inset of Port Arthur (Lüshunkou 旅順口) at right. However, it is also atypical because it incorporates a much broader geographic scope, illustrating the eastern end of Eurasia along with China and Korea in the central map along with the entirety of Afro-Eurasia in the inset at bottom-right.

Rail and shipping lines are illustrated throughout, with the distances of shipping lines noted. The legend includes symbols for transportation and communication lines, administrative divisions, and geographic features. Scales are given in Japanese ri, Chinese li, and Korean ri (all represented by the character 里), as well as standard nautical miles. Colored inks distinguish the Japanese and Russian empires, Joseon Korea, and other polities, including individual Chinese provinces. Elevation is illustrated by hachure.

This map was published a few months after the start of the conflict, which commenced with a major naval battle in February 1904 that was indecisive but resulted in the Russian Far East Fleet being bottled up at Port Arthur. In the following months, sporadic naval engagements led to tit-for-tat sinkings but no major change in the situation, as the Russian naval forces were protected by naval batteries at Port Arthur but not confident enough to fight a battle on the open seas. Meanwhile, Japanese troops landed in Korea and rapidly advanced to the Liaoning Peninsula. But they saw only slow and costly progress against the heavily fortified Russian positions approaching Port Arthur.

Significantly, soon before this map was published, on April 13, the Russian naval commander Admiral Stepan Osipovich Makarov (Степа́н О́сипович Мака́ров) was killed by a naval mine along with more than 600 Russian sailors. The incident sapped the already-sagging morale of Russian forces and disrupted their command structure (Makarov's replacement was stuck at Vladivostok, unable to reach Port Arthur).

The Russo-Japanese War, fought from February 8, 1904 - September 5, 1905, pitted Imperial Japan against Tsarist Russia over rival ambitions in Manchuria and Korea. Both Russia and Japan had grand visions for the region. Russia traditionally had only one Pacific port, Vladivostok, which was operational only during the warm summer months. In 1898, Russia coerced China, then weakened after the First Sino-Japanese War (1894 - 1895), to lease them Port Arthur, a warm water port on the Liaodong Peninsula. They also negotiated a right-of-way to connect Port Arthur to the China Eastern Railway, which ran from nearby Jinzhou (Dalian, Dalniy) to Harbin, and ultimately linked up with the Trans-Siberian Railway. Port Arthur was thus the cornerstone of a sphere of influence covering Manchuria and Korea.

Japan had its own imperial designs and saw itself as the natural overlord in East Asia, particularly after their victory in the First Sino-Japanese War. Korea and Manchuria were also important to the Japanese as steppingstones into China, with its seemingly unlimited resources.

There was initially some attempt at negotiation between the imperialist powers. The Japanese leadership was far from unified on a decision to attack Russia given the size of Russia's military and the high financial costs of a war. But the hawks won the debate, while Tsar Nicholas II arrogantly believed it impossible that Japan could challenge a major European power. Japan proved him wrong, launching a surprise attack on the Russian Eastern Fleet stationed at Port Arthur. The Russians were unable to defeat the Japanese at sea and steadily lost ground on land, despite imposing heavy losses on the attackers. A series of embarrassing defeats, the costs of the war, and simmering discontent forced the Tsar to negotiate and U.S. President Theodore Roosevelt arbitrated a peace, confirmed by the Treaty of Portsmouth.

The treaty recognized Japan's claims on Korea and called for the evacuation of Russian forces from Manchuria. Port Arthur was handed over to the Japanese as was the southern section of the China Eastern Railway, which became known as the South Manchuria Railway. The company created to manage the railway, the South Manchuria Railway Company (Mantetsu), soon developed into a mega-conglomerate, overseeing hotels, mines, mills, power plants, and much more, that expanded Japanese influence in Manchuria to the point that it became a virtual colony. By the 1930s, Mantetsu was the largest company in Japan and by itself formed a significant portion of the Japanese economy.

The victory of Imperial Japan came as a surprise to international observers, being the first major military victory in the modern era of an Asian over European power. The consequences transformed the global balance of power and confirmed Japan as the pre-eminent power in East Asia.

Stylistically this map sits at the tail end of the Meiji-era (1868 - 1912) cartographic tradition - wherein Western style cartographic standards, lithographic printing, and imported inks, were combined with Ukiyo-e color traditions and aesthetic values. Such maps began to fall out of fashion near the turn of the century, when they were supplanted by more reserved printed color, making this map a fairly late representation of this style.

This map was printed on April 23, 1904 (Meiji 37) and published five days later on April 28. Kashima Nagatoshi (鹿島長) of the Hiroseidō (廣正堂) publishing house is noted as the editor, printer, and publisher. It is not known to exist in any institutional collections and is scarce to the market.

Kashima Nagatoshi (鹿島長壽; fl. c. 1899 – 1904) was an Osaka-based printer and publisher active in the late Meiji period. Little is known about them and their only surviving works that have been cataloged are a map of East Asia during the Russo-Japanese War and a series of postcards published in 1899 with Hiroseidō (廣正堂). Learn More...


Hiroseidō (廣正堂; fl. c. 1899 – 1904) was an Osaka-based publisher active in the late Meiji period. Only a few of their publications have been cataloged, including a map of East Asia during the Russo-Japanese War, a collection of Hokusai prints, and illustrations of the 5th National Industrial Exhibition held in Osaka in 1903. Learn More...