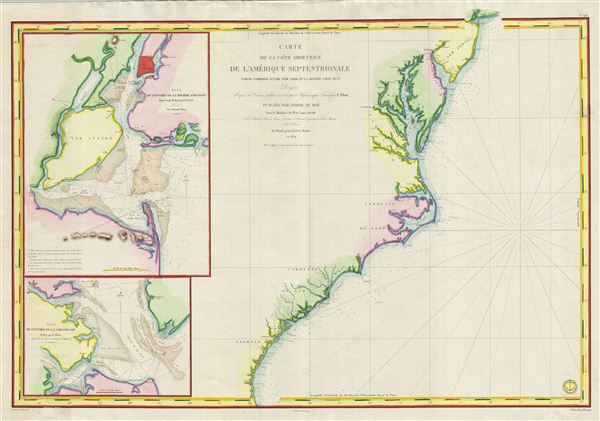 Scarce French nautical chart of the East Coast from New York to Florida.

This is a highly scarce 1834 map of the eastern coast of the United States. The map covers the entire coastline from New York City to the St. John River in Florida, inclusive of the Chesapeake Bay, the Outer Banks, and the Carolina, Virginia, and Georgia coastlines. Two inset maps are included on the left. The upper map details the entrance to New York Harbor from Sandy Hook to Manhattan and from Staten Island to Rockaway Inlet. The lower inset details the entrance to the Chesapeake Bay. The whole is typical of nautical charts, offering limited inland detail but a wealth of nautical information including countless depth soundings, shore lines, river soundings, shipping lanes, and other practical information for the mariner. A fine example of a working sea chart.

Cartographically this map was derived from the work of e. Blunt an American hydrographer and chart maker active in the private sector. It was updated and revised in 1834 by J. M Hacq and Chassant for issue by the French Depot-General da la Marine. The lower right corner bears the 'Depot General de la Marine' imprint. The map is dedicated to the King of France, Louis-Philippe, whose short post-Napoleon reign is best known as the July Monarchy.

Edmund March Blunt (June 20, 1770 - 1862) was an American navigator, bookseller, chartmaker, and cartographer based in Newburyport, Massachusetts. Blunt was born in Portsmouth, New Hampshire in 1770. In 1796, along with the nominal assistance of prominent navigator Captain Lawrence Furlong, Blunt published The American Coast Pilot, one of the most important published works on American navigation. Although much of the work was plagiarized from British publications, the Coast Pilot was an immediate popular success. In response to the popularity of his work, Blunt published 21 subsequent editions, each with important updates and revisions. The first edition to contain map plates was printed in 1804. Following a fire that destroyed his offices at The Sign of the Bible in 1811, Blunt moved his business to New York and opened a new shop, The Sign of the Quadrant. In time, his sons Edmond Jr. (1799 - 1866) and George William (1802 - 1878), took over the family business, and renamed the firm E. and G. W. Blunt. They both produced their own nautical books, charts, and instruments, as well as republished their father’s work. In 1830, Edmund accepted a position under Ferdinand Hassler at the United States Office of the Coast Survey. Much of Blunt's original work eventually found its way into U.S. Coast Survey Publications. Due to the quality and detail of Blunt's work, revised editions of his most important charts were republished well into the 1880s.