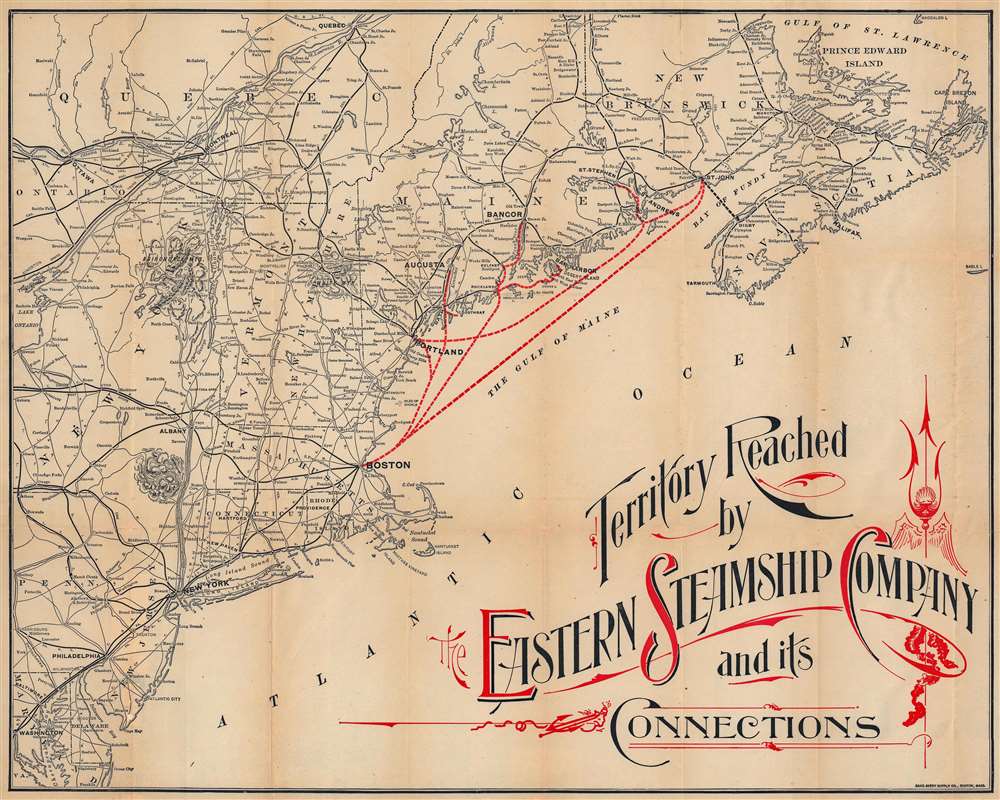 This is a c. 1905 Rand Avery map of New England and the routes of the Eastern Steamship Company.

Red overprinting illustrates the Eastern Steamship Company's routes along the eastern seaboard servicing Boston, Portland, Augusta, Bangor, and Bar Harbor in the United States, and St. Stephen, St. Andrews, and St. John in Canada. Bold black lines highlight major railroads. Among these are the New York, New Haven, and Hartford Railroad; the Boston and Maine Railroad; and the Delaware, Lackawanna, and Western Railroad. The region's minor railroad network appears as well, providing travelers a rather detailed overview of New England's travel options during the first decade of the 20th century.

The Eastern Steamship Company - and an American Scoundrel

To return to Morse, he finally reported to the Atlanta penitentiary in January 1910 and was imprisoned alongside Charles Ponzi (who would later create the infamous Ponzi scheme). Morse fell ill in 1912 and was diagnosed with Bright's Disease, along with other maladies, and it was determined that he would die if he remained in prison. This earned him a pardon from President William Howard Taft. Once out of prison, Morse left for Wiesbaden, Germany, to seek treatment. Not long after he left the Justice Department learned that Morse had faked his illness by drinking a combination of soapsuds and chemicals. His association with Eastern (but not shipping) ends here.

This map was created by Rand Avery and published by the Eastern Steamship Company c. 1905. Admittedly, since this map is undated, it could date from any time during the existence of the Eastern Steamship Company, which was from 1901 until 1911. We note two cataloged examples which are part of the collection of the Osher Map Library at the University of Southern Maine and Harvard University, but there is a discrepancy in the cataloged publication dates.

Very good. Verso repairs to fold separations. Verso reinforcement where once attached to binder. Small areas of infill at a few fold intersections.