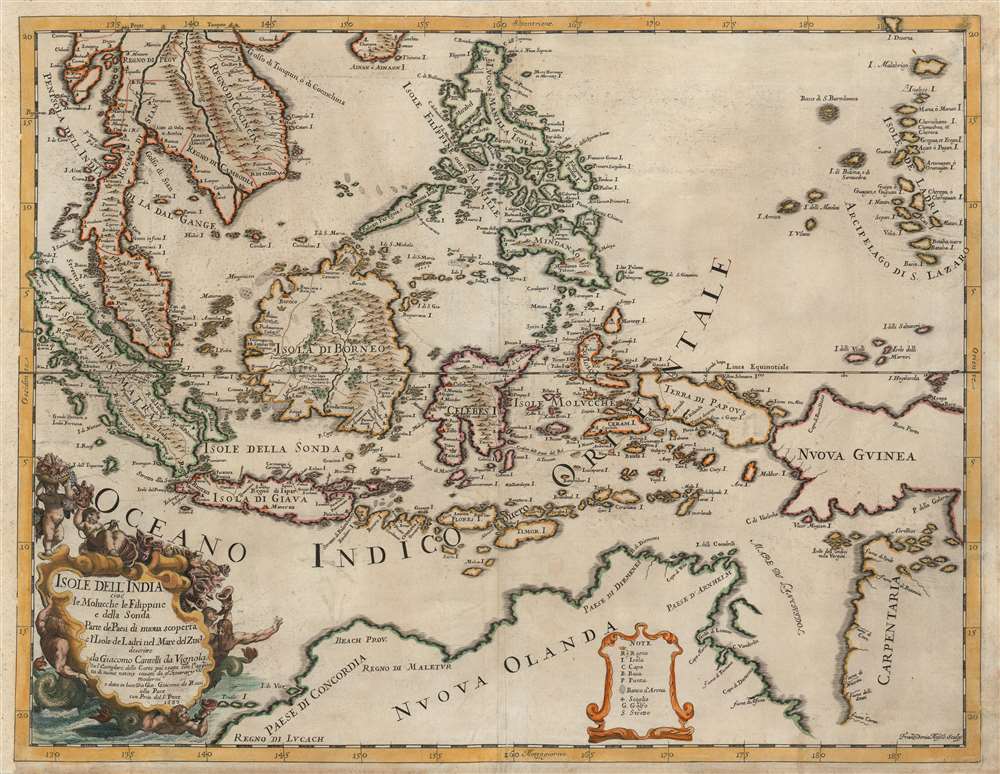 A rare, highly decorative 1683 map of Southeast Asia by Giacomo Cantelli da Vignola and Giacomo de Rossi. The map shows the Malay Peninsula, Cochinchina, and the kingdom of Siam; Sumatra, Java, Borneo, and the Spice Islands appear to be based primarily on the Dutch maps of the period, as is also the case with the Philippines. Singapore Island is named. The island 'Terfra di Papous' is shown as a separate landmass from 'Nuova Guinea,' an error preserved from Nicolosi's large map of Asia, whose geography this map otherwise improves upon. The southern portion of the map is dominated by Nuova Olanda, that is to say, New Holland aka Australia: much of the detail here appears to be drawn from Thevenot's map based on Tazman, but there are some place names retained from Marco Polo, such as the hypothetical provinces of Lucach and Maletur.

There is a lush cartouche in the lower left-hand quadrant that is surrounded by putti and Mer-men, bearing a wealth of sea-shells and cornucopia filled with spice-pods.

This map was prepared by Giacomo Cantelli da Vignola, engraved by Francus Donia Messis, and published by Giacomo de Rossi in his c. 1683 Mercurio Geografico. We identify only three institutional collections to hold separate examples of this map: Princeton, the National Library Board of Singapore, and the Bibliothèque Nationale de France. We count fifteen examples of the Mercurio Geografico in institutional collections.

Average condition. Margins extended with some loss to border. Reinforced at centerfold.