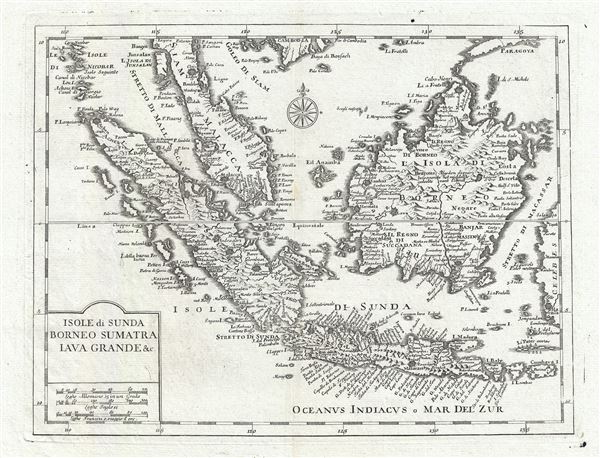 An attractive 1740 map of the East Indies, including Malay (Malacca), Singapore, Borneo, Sumatra, and Java. Centered on the Strait of Sunda (site of the great Krakatoa Volcano), the map covers from the modern day Thai island of Phuket (Junsalan) and southern Cambodia, south to Java, and from the Nicobar Islands to the Celebes. There is impressive detail throughout, including numerous inland cities and topography illustrated in profile. The Strait of Singapore is identified, but the island itself, though apparent, is unnamed. This map was drown for the Giambattista Albrizzi Italian edition of Guillaume De L'Isle's Atalante novissimo che contiene tutte le parti del Mondo. The maps in this edition are all attributed to Isaak Tirion, who probably laid them out, but they were engraved by Albrizzi, with Italian text and styling. Tirion himself did not release these maps on his own accord until the publication of his own atlas in 1744.


Isaak Tirion (1705 - 1765) was a Dutch publisher in Amsterdam. Born in Utrecht, Tirion quickly rose to prominence by publishing pamphlets, historical works, and most importantly, maps and atlases. He produced several atlases and Dutch town plans. His maps are mainly based on those of Guillaume de l'Isle. Tirion eventually relocated his printing house to the prestigious Kalverstraat. In his long career, he produced eight atlases in multiple editions, some of which were published posthumously until about 1784. Learn More...