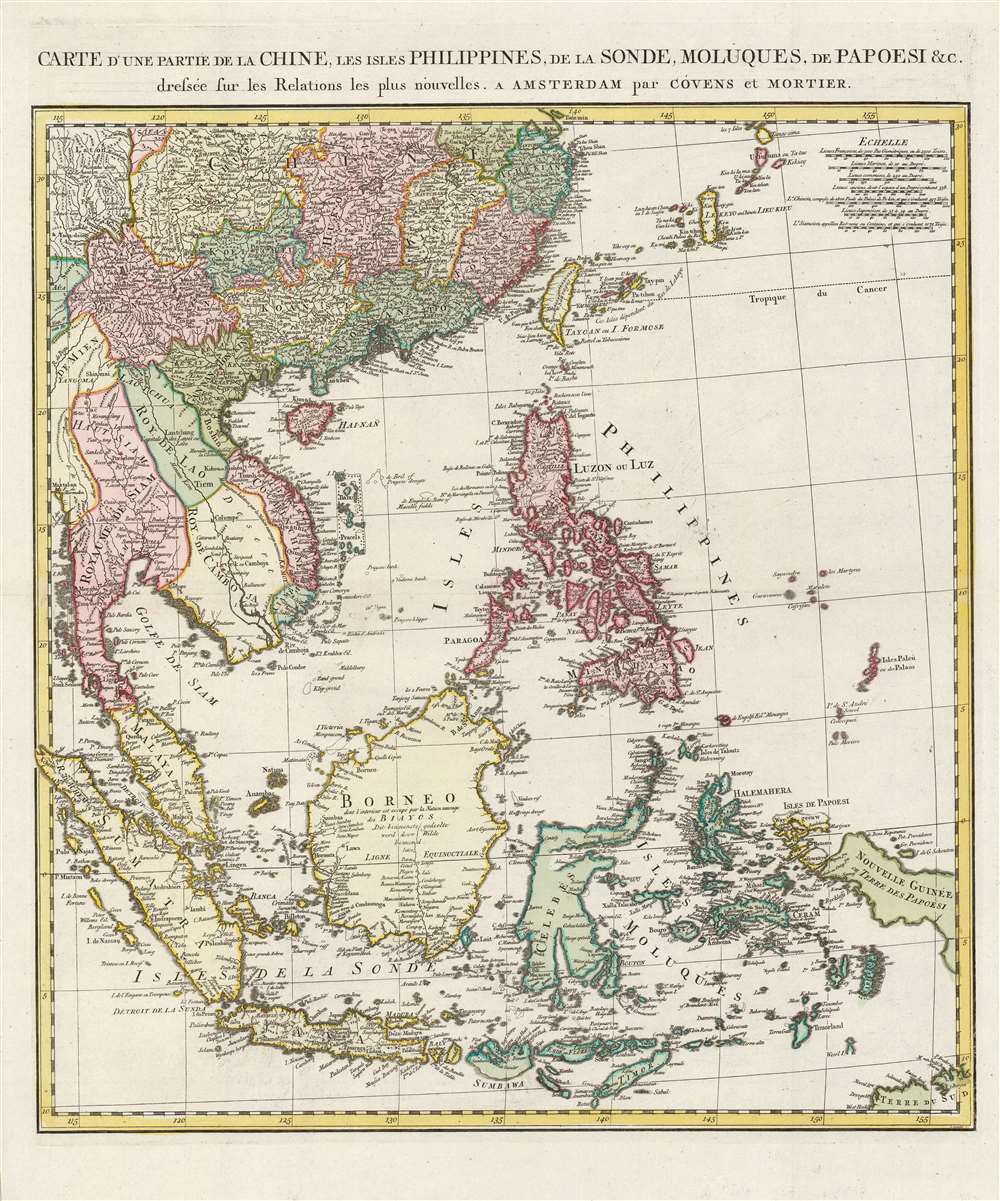 This is a 1757 Covens and Mortier map of southern China, the Malay Peninsula, and the East Indies. It includes Taiwan (Formosa), the Philippines, Vietnam (Tonquin and Cochinchine), Laos, Cambodia, Thailand (Siam), Malay, Singapore, Sumatra, and Borneo, as well as most of modern-day Indonesia. The map replaces earlier Covens and Mortier maps based on the work of Guillaume De l'Isle, instead drawing on newer maps by Jean Baptiste Bourguignon d'Anville.

Updating the Mapping of the East

Though Covens and Mortier were an Amsterdam publisher, this map's dense detail and overall sophistication reflect the continuing effort of French cartographers to come to grips with the geography East Asia, Southeast Asia, and the East Indies. Despite centuries of colonial engagement, geographical knowledge, especially of the interior, remained limited. D'Anville's influence is most apparent in the presentation of Vietnam and Cambodia. The Mekong Valley includes verbatim the notation from the French mapmaker's 1752 Seconde partie de la Carte d'Asie. Also, the present work includes a wall separating the Trịnh and Nguyễn kingdoms, which among European works first appears in D'Anville's maps. Similarly, the toponomy for the interior of Borneo is also drawn from directly from D'Anville. Although densely mapped with spurious geography on many earlier maps, here D'Anville's leaves open space, reflecting a lack of reliable data, rather than retain questionable outdated content - a convention typical of his scientific approach. The firm's use of D'Anville's cartography was neither plagiarism nor flattery, rather it resulted from a close ongoing relationship with D'Anville. In fact, the engraver Johannes Condet's father Claas, and brother Gerardus, both engraved for D'Anville.

This map was engraved by Johannes Condet for inclusion in Covens and Mortier's 1757 Atlas Nouveau. We are aware of a single state. We see eleven examples of the separate map in institutional collections. It appears on the market from time to time.


Johannes Condet (1711 - 1781) was a Dutch engraver, and a member of a family of engravers active in The Hague during the late 17th and early 18th centuries. His father Claas and younger brother Gerardus worked for d'Anville; Johannes' imprint appeared on the maps of Mortier, Popple and De l'Isle. Learn More...