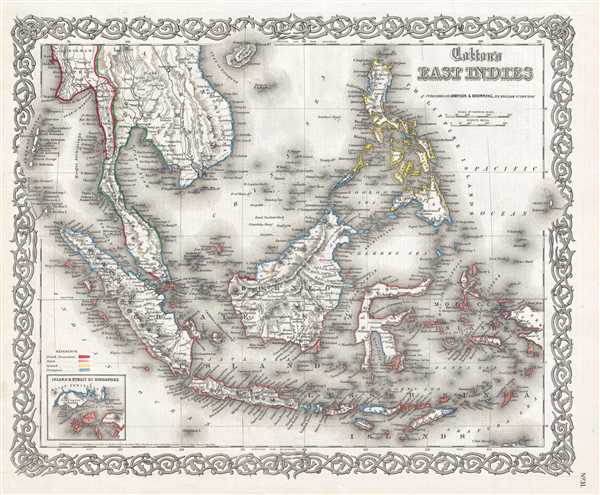 One of the first American maps to identify Singapore.

This is a beautiful full color first edition example of J. H. Colton's 1855 Colton map of the East Indies. The map depicts from Burma in the extreme northwest to New Guinea and East Timor in the southeast, which includes of burma, Pegu, Siam (Thailand), Cambodia, Chochin (South Vietnam), Malay (Malaysia), Borneo, the Philippines, Java, Sumatra, and Singapore. This map is significant as it is among the first American maps to detail the Island and City of Singapore - appearing on the bottom right. At the time of publication, Singapore, governed by the British East India Company, was experiencing a massive tide of immigration and growth due to its open immigration and free trade policies. Cities, towns, forts, rivers, rapids, fords, and an assortment of additional topographical details are identified throughout. The whole is surrounded by Colton's typical spiral motif border.

Dated and copyrighted to J. H. Colton, 1855. Published from Colton's 172 William Street Office in New York City. Issued as page no. 31 in volume 2 of the first edition of George Washington Colton's 1855 Atlas of the World.