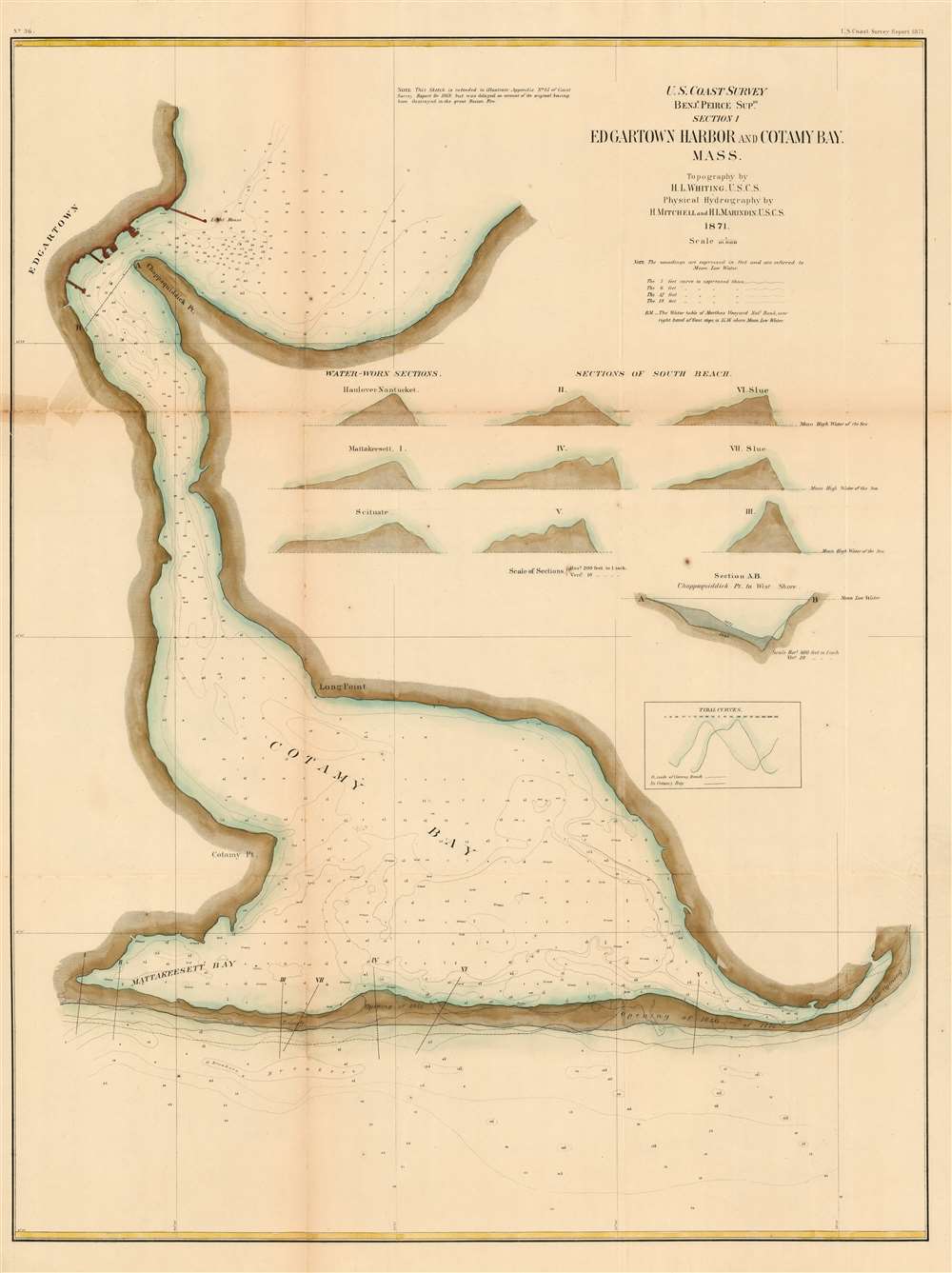 A very rare 1871 U.S. Coast Survey Map of Edgartown and Katama Bay on Martha's Vineyard, Massachusetts. This detailed working harbor chart was produced to illustrate the buildup of sand in the bay (making it unnavigable) in order to argue for the opening of a safe passage through Katama Beach. The chart shows the approaches to Edgartown - both the main approach from the northeast, marked by a lighthouse, and also the approaches via Katama Bay (Cotamy on the map)- whose mouth is shown entirely blocked by Katama Beach. Historical natural openings in the beach are noted, including a 1776 opening which had appeared on Des Barres' chart of the island, are noted. Nine cross sections of the beach are shown, indicating the height of the beach above sea level. A further cross section, showing the increasing silt blockage of the northern mouth of the Bay between the west shore and Chappaquiddick Point is shown as well. Tidal patterns measured inside and outside Katana bay are compared in a chart. Detailed soundings are provided throughout.

The chart was intended to attend the 1869 report of Henry Whiting concerning the Vineyard and Nantucket, specifically addressing the openings which had appeared in Katama Beach, and advocating for the creation of artificial breaches to open the bay. In the appendix, Whiting writes:

With regard to the question of opening Cotamy Beach by artificial means, and thus restoring the former regiment of the bay and harbor, there seems to be but one answer to be given - it should be done at once.

The great value of Edgartown Harbor as... the only perfect shelter, within reach of the mass of vessels sometimes caught by bad weather in the dangerous approaches to Cape Cod; the importance of an inlet or passage-way from the harbor southward for the smaller pilot-boats peculiar o the island, which in certain winds and storms can safely an quickly reach vessels needing a pilot off Muskeget Channel, through this southern inlet, when it would be impossible for them to round Cape Poge, or reach the ground of danger by any other route; the fishing interests of Edgartown and its vicinity - an interest of much value, shared by a large proportion of the population, and so seriously affected by the loss of this safe and direct pathway to their fishing-grounds - all call for action and relief in the matter of this closed inlet.

That the chart did not actually accompany the above impassioned argument is made apparent in a note on the chart, which explains:

This Sketch is intended to illustrate Appendix No. 15 of Coast Survey Report for 1869, but was delayed on account of the original having been destroyed in the great Boston Fire.

A cursory glance Katama Bay via satellite imaging shows us no indication that the channel Whiting so passionately lobbied for was ever undertaken.

The map was produced in 1871 by the Coastal Survey, and in this initial issue it appears to be extremely rare: OCLC lists only one example of this state, at Yale. Three examples of the 1872 issue appear in OCLC.


Henry Mitchell (September 16, 1830 – December 1, 1902) was an American oceanographer and hydrographer, and a co-founder of the National Geographic society. Born in Nantucket to surveyor and astronomer William Mitchell (December 20, 1791 - April 19, 1868), Henry joined the U.S. Coastal survey at the age of 19, and produced for the survey many charts of the waters near his home, both on Nantucket and Martha's Vineyard. He worked for four years to produce a chart of New York Harbor, which was hailed as the most accurate of its contemporaries. During his service with the survey he devised new methods for measuring tides and currents, advancing the science of hydrography beyond the production of new charts. He traveled extensively, visiting Europe to study the old world's canals, dykes and harbors, and even visited the Suez Canal in Egypt as it neared completion. In 1888 he would be among the thirty-three luminaries to found the National Geographic Society, proving instrumental in bridging fields in order to build the multidisciplinary foundation upon which the Society was based. Learn More...


Benjamin Peirce (April 4, 1809 - October 6, 1880) was a mathematician who taught at Harvard University for nearly 50 years. He served as director of the U.S. Coast Survey from 1867 to 1874. He made contributions to the fields of celestial mechanics, statistics, number theory, algebra, and the philosophy of mathematics. He was appointed professor of mathematics at Harvard in 1831, only two years after his graduation. Learn More...


Henry L. Whiting (1821-1897) worked for the United States Coast and Geodetic Survey for nearly 60 years, having joined in July of 1838. He began joining survey parties in 1842 and began a long and steady climb through the survey's hierarchy. By the 1850s he was acting as instructor in field surveys at the Naval Academy at Annapolis, and became Professor of Topographical Engineering in Massachusetts Institute of Technology. He proposed and executed he first systematic inspection of the survey's field work. He established many of the conventions in lettering and nomenclature which would be adopted by the survey going forward. His surveys included Florida; the Mississippi River; Provincetown Harbor and Boston Harbor; The Pacific coast from San Diego to Puget Sound; Portland, Maine; Providence Harbor in Rhode Island; and New York Harbor. With the outbreak of the Civil War, he was the first of the Survey then abroad to volunteer for service in Washington, and went on to make cooperative surveys with the Army throughout the war, in many cases surveying battlegrounds just after the close of action. Though born inland in Albany, New York, he was a lifelong resident of Martha’s Vineyard, and would regularly resurvey his home. He would in 1856 co-found the Martha’s Vineyard Agricultural Society. Learn More...

Report of the Superintendant of the U.S. Coast Survey, (1872 edition).

Good condition. Reinforced with rice paper. Toning at folds, and some stains from old tape repairs.