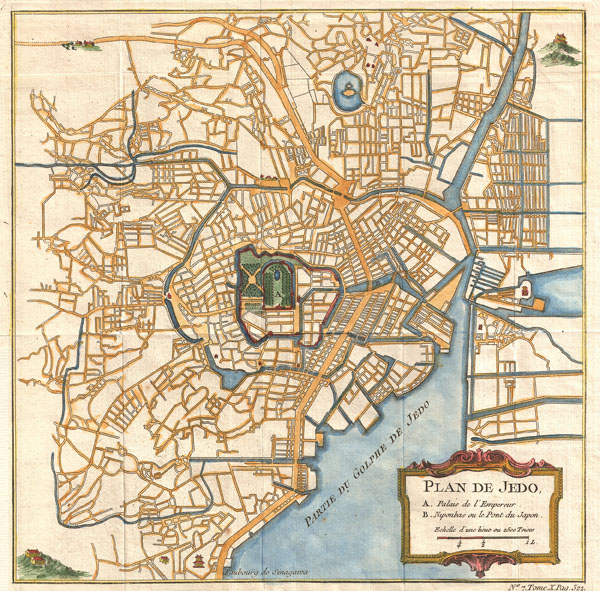 This is an attractive and highly desirable c. 1752 map of Edo or Tokyo, Japan. Issued by Bellin and Schley for Prevost's Histoire Generale des Voyages, this map is cartographically based on a 1702 map of the same issued by Scheuchzer and Kaempfer, which itself is most likely based on Japanese maps. Centered on Edo Castle, this map depicts the whole of Edo as it existed, with numerous street shown but not named. Edo Castle itself is fancifully depicted as a French style formal garden. Possibly due to the cartographers inability to translate Japanese, the only three named locations on the map are Edo Castle, Japan Bridge, and the 'Faubourg de Sinagawa.' Here, in Sinagawa, the Tokugawa Shogunate maintained the Suzugamori Execution grounds where traitors to the state, criminals, and Christians were executed in an effort to contain 'spiritual pollution.' Drawn by N. Bellin and Schley for Abbe Prevost's Histoire Generale des Voyages.

Jacob Van der Schley (1715 - 1779) was a prominent Amsterdam engraver and draftsman based out of Amsterdam. Schley apprenticed under portrait engraver Bernard Picart, whose style he imitated. He is said to have completed several of Picart's portraits following his master's death. While Schley is primarily known for his work as a portraitist and illustrator, he also has a considerable cartographic corpus. He is known to have worked with Bellin, Hondt, and Provost, among others. Learn More...

Very good condition. Orignal fold lines visible but faint. Blank on verso.
Looking for a high-resolution scan of this?