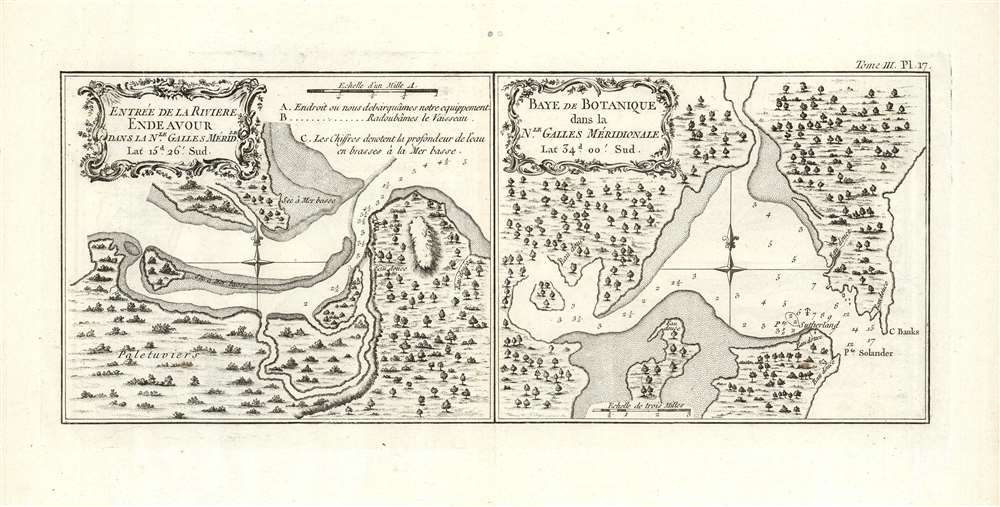 French Edition of the First Harbor Charts of the Endeavour River and Botany Bay.
$450.00

This is the 1774 first French edition of the first printed map of the mouth of the Endeavor River and the harbor of Botany Bay, discovered and named by the legendary navigator James Cook during his first voyage aboard the H.M.S. Endeavor. Both of these harbor charts are oriented to the north; they show depth soundings, the location of fresh water, and sandbars; topography and vegetation is shown pictorially

The right-hand chart on this sheet focuses on Botany Bay. This New South Wales harbor has a long human presence - Archaeological evidence shows Aboriginal settlement dating back 5,000 years: Lieutenant James Cook would encounter the place on April 29, 1770, as HMS Endeavour sailed up the east coast of Australia. Cook's landing here was the first British landfall in Australia, representing the beginning of Britain's colonization of the continent. Cook's initial name for the place was 'Stingrays Harbour,' referencing the many such fish they caught there. After further consideration, Cook instead - in honor of his ship's botanists and the wealth of plants they found here - chose to name the harbor 'Botany Bay' in his published logbooks.

Amongst the depth soundings is Endeavour's anchorage off the shore of Point Sutherland, also noted here. This headland was named after crewman Forby Sutherland, who died April 30 1770: the first British subject to die in Australia and the first European to be buried in New South Wales.

This chart of the mouth of the Endeavour river reveal's Cook's haven on the Australian coast after his ship ran aground and nearly sank on June 10, 1770. After remaining aground 23 hours, Cook and crew were forced to throw overboard some fifty tons of cargo and supplies in order to float Endeavour off the rocks. Endeavour was finally able to limp to shore and beach the ship for repairs at the mouth of the Endeavour River, the subject of this chart. A three-point legend shows the locations of A) the beach where the crew disembarked and unloaded their remaining kit; B) the shallows upon which Endeavour was careened for repair; and C) the depth of the river mouth at low tide.

This map was engraved by Robert Bénard for the 1774 French edition of James Hawkesworth's 1773 account of Cook's voyages. It follows the 1772-1773 English edition engraved by William Whitchurch and published in 1773. While Hawkesworth's book is well represented in institutional collections, this separate map is catalogued only by the National Library of Australia, the Sachsische Landesbibliothek, and the Hocken Collection at the University of Otago.