1790 Faden Map of the Roads of Great Britain or England 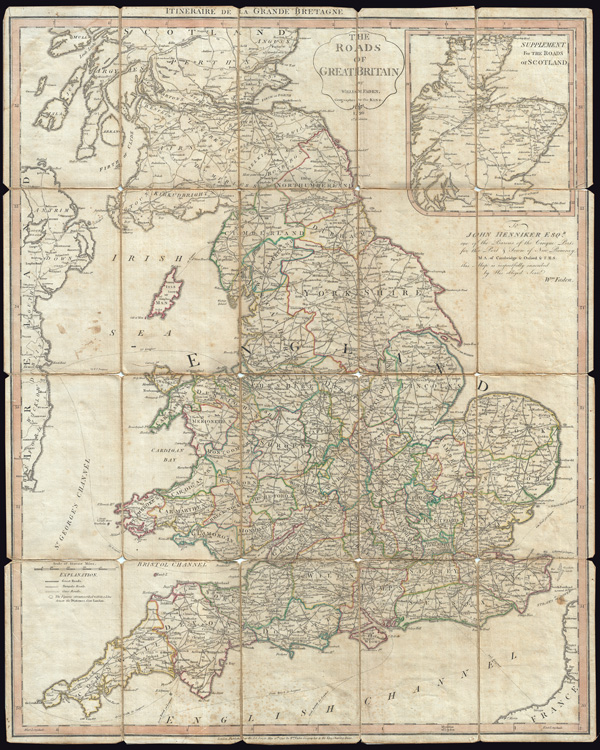 1790 Faden Map of the Roads of Great Britain or England

A very attractive example of Faden's desirable 'Roads of Great Britain' in its second edition, 1790. Covering from Scotland to Cornwall, this large pocket map was designed with the traveler in mind, showing most of the major and minor roads in England. In the upper right quadrant there is a smaller inset map showing the roadways of Scotland. This map first appeared in 1781 and was published in several editions, first by Faden then by his successor Wyld, until about 1833.

Faden dedicated this map to John Henniker, Baron of Worlingsworth Hall, and a member of Parliament representing New Romney. New Romney was one of the Cinque Ports, a series of important shipping ports along the coast of Kent and Sussex where the English Channel was narrowest. Faden clearly hoped that Henniker's position as MP for New Romney would see his 'Roads of Great Britain' distributed to the many teamsters who came and went from the port. Faden must have been at least partially correct as this map enjoyed a long and popular run in numerous editions.

Good. Wear on original fold lines and edges. Overall toning. Backed with heavy linen which has split in some places along the folds. We have added minor versr reinforcements to some of the split folds.

National Library of Australia, MAP RM 1514.
Looking for a high-resolution scan of this?