1752 Buache Map of the Sea Floor of the English Channel 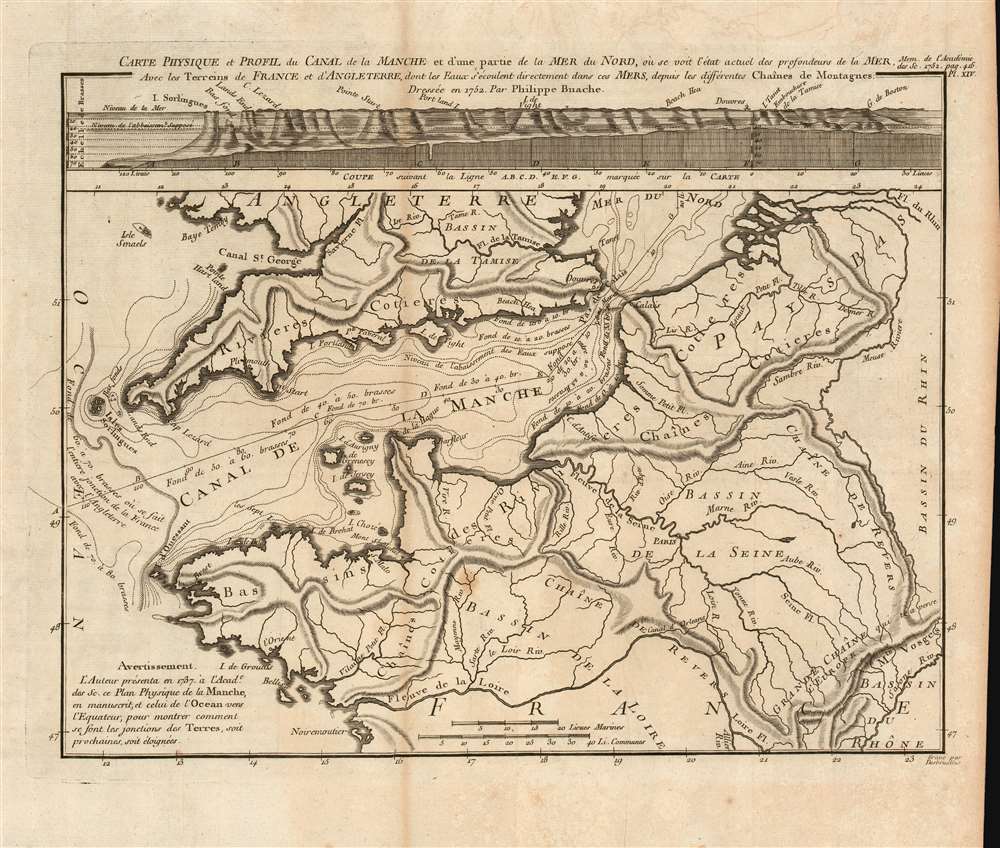 1752 Buache Map of the Sea Floor of the English Channel

An early effort to map the sea floor, focusing on the English Channel.
$750.00

This is a beautiful, rare 1752 Philippe Buache map of the English Channel, showing the coast of France (from the mouth of the Loire to the Low Countries and the mouth of the Rhine) and the entire southern coast of England. The map includes depth soundings for the Channel, and is accompanied by a cross-section chart of the whole of the Channel comparing the 'supposed' depth of the Channel with its actual, measured depth. The map is notable for its early use of isobaths - lines showing depth contours of the ocean floor. Although not the first appearance of this technique (likely this was Luigi Ferdinando Marsigli's 1725 map of the Gulf of Lion), Buache's is among the first acquirable maps demonstrating the technique.

A note on the map indicates that it was initially presented by Buache in manuscript to the French Royal Academy in 1737 along with another 'of the ocean to the Equator, to show how were the junctions of the lands, either near or distant.' This appears to be an early exploration of the ideas that Buache would later publish in 1752 to accompany this map. The associated essay (not included), Essai de Géographie Physique, argued that the Earth's great river basins are defined by major mountain ranges, many of which he believed extended beneath the oceans. While his theories were sufficiently far-reaching to necessitate the invention of many undersea mountain ranges (some of which he deduced mathematically!) to support his theory, his initial approaches to the topic appear to have been based on extremely concrete measurement, such as evidenced by this map's exacting depiction of the floor of the Channel. Buache's innovative ideas enthralled many Parisian intellectuals, and Buache was admitted into the Royal Academy of Sciences the same year this map and the associated essay were published.

This map was printed for inclusion in the 1752 edition of Histoire de l'Académie royale des sciences. We see eight examples of that volume catalogued in institutional collections. The separate map is listed only in the collection of the Bibliotheque Nationale de France.

Very good condition. Original folds, some creasing and areas of toning. Else excellent.