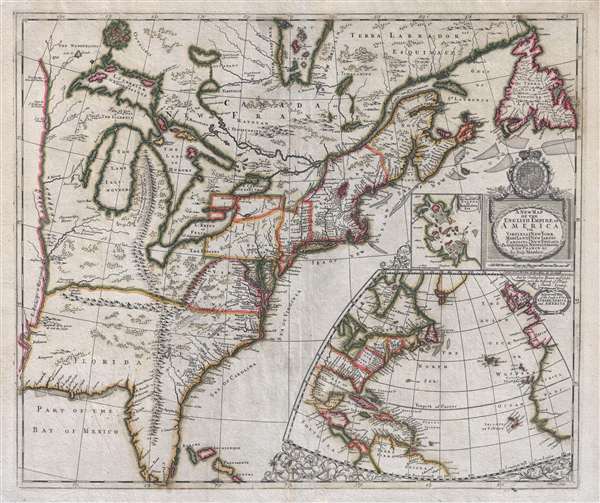 An important and extremely rare separately issued c. 1695 map of the eastern part of North America by Robert Morden and Christopher Browne. Centered on the eastern Great Lakes, this map covers form the Mississippi River Valley to the Grand Banks and Newfoundland and from Hudson Bay to the Florida Keys. There are two large insets, on in the lower right illustrating the northern Atlantic and the relation of the American colonies to Europe and Africa. The second is a small plan of Boston Harbor and Massachusetts Bay.

Essentially a propaganda piece, Morden published this map to promote British interests and capitalize on public interest in the colonies associated with the Second Indian War or, as it is more commonly known, King William's War (1689 – 1697). King William's War was essentially an extension of the Nine Years War in Europe to the colonies, with French and English colonies set against one another for control of the Fur Trade. Although neither side was willing to dedicate manpower that was much needed on the European front, the battle was waged between each respective nation's American Indian Allies. The Iroquois League fought with England while the Wabanaki Confederacy sided with France. This map covers the areas affected by the war, including the rich fur lands around the Great Lakes and in the Hudson Bay, and additionally expresses the potential of the French holdings around the Great Lakes and the Mississippi River. Morden draws the English colonies, which then were limited to coastal communities in New England, thrusting westward at the expense of French claims around the Great Lakes.

The map offers much of interest including an overstated mapping of the Great Lakes and Mississippi valley derived from Dablon (1672) and Thevenot (1681). The Appalachian Mountains extend south will into peninsular Florida. They also trifurcate mysteriously in modern day Kentucky. One range, roughly correct, extends northwards towards New England. Another arm extends westwards towards the Mississippi River. The third and largest branch runs north into Michigan's lower peninsula and features a very curious unattributed annotation:

In Carolina and southern Virginia Morden follows the cartography of John Lederer, identifying a 'Large Savana' at the foot of the Appalachian Mountains, Lake Ashley as the source of the Savannah River (or a mismapping of the May River), and the Desert Arenosa. Today Lederer is highly criticized for fabricating much of his journey and a cursory examination of the map will reveal what might seem to be several gross cartographic errors, including a great savanna in the Piedmont, the 'Deserta Arensa,' and Ashley Lake. Our own research suggest there may be a bit of truth in Lederer's account, with the desert, Arensoa, corresponding to the San Hills Region. The savanna, which Lederer described as 'marshish grounds at the foot of the Apalataei,' is more likely than not and area of marshy denuded land that has since dried up. Lake Ashley is a pretty common feature on older maps of this region and, although fictional, may have been copied from other sources and simply renamed to add context to Lederer's voyages.

These is some considerable debate about the issue date of this map with most authorities dating c. 1695 but Burden pushing the publication date 1698. What we know is that it bears the armorial crest of co-regents William and Mary meaning it must have been published after 1688. Cartographic evidence suggests that the inset map of Boston Harbor and Massachusetts Bay is derived from Thomas Pound's large format map of New England, further refining the date to 1691. On the opposite end, a known example was purchased and bound into Philip Lea's composite atlas for John Custis in 1698, making it the last possible date for production.

This map exists in two editions and several states. The most common variant is the 1719 John Senex second edition, which is the only version to appear in a regular atlas. The present example is the second state of the first edition by Mordon and Brown, identifiable by the rounded numbers used for the longitude lines. All editions and states other than the Senex are exceedingly rare.

Robert Morden (c. 1650 – 1703) was an English bookseller, publisher, globe maker, and mapmaker active in London on the second half of the 17th century. He is notable as one of the first successful commercial map publishers. Morden was most likely born in the north of England. As a young map he apprenticed to Joseph Moxon. He published a wide corpus of maps, most which focused on the British Isles, but also included important early maps of Britain's colonial holdings. Morden frequently partnered with William Berry and Christopher Browne. He maintained offices at the Signe of the Atlases in Cornhill and New Cheapside, London. Learn More...


John Harris (fl. 1686 – 1730) was a British cartographer, engraver and draughtsman active in London during the late 17th and early 18th centuries. Harris is believed to have been born in Northamponshire but little else is certain regarding his personal life as 'John Harris' was an exceedingly common name be 17th century London. Nonetheless, his known work includes engravings for Philip Lea, Robert Morden, Herman Moll, and others. Learn More...