1851 U.S. Coast Survey Chart or Map of the Entrance of Savannah River, Georgia 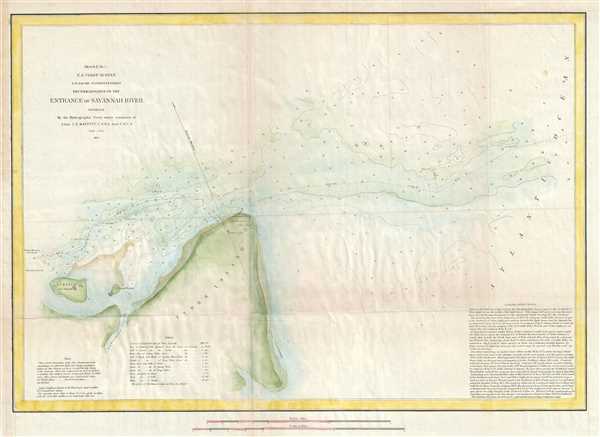 1851 U.S. Coast Survey Chart or Map of the Entrance of Savannah River, Georgia

Nautical chart depicting the entrance of the Savannah River, Georgia.

This is a lovely 1851 U.S. Coast Survey map or nautical chart of the entrance of Savannah River in Georgia. Includes Cockspur Island and Tybee Island. Fort Pulaski, Tybee Beacon and the Tybee Lighthouse are identified. The chart includes several depth soundings as well as detailed notes on tides and sailing directions. This chart was compiled by the hydrographic party under the command of Lieut. J. N. Maffitt. Produced in 1851 under the Supervision of A. D. Bache, the most influential leader of the Coast Survey.