1851 U.S. Coast Survey Map or Chart of the Entrance of Savannah River, Georgia 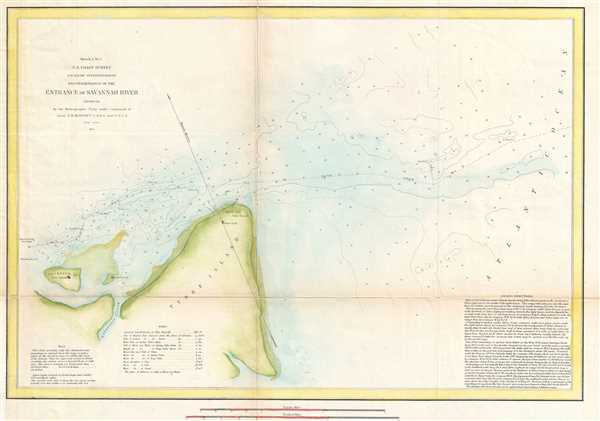 1851 U.S. Coast Survey Map or Chart of the Entrance of Savannah River, Georgia

The easternmost point in Georgia - and where the U.S. Air Force accidentally dropped a nuclear bomb.

This is an 1851 U.S. Coast Survey map or nautical chart of the entrance of Savannah River in Georgia. The map depicts from Cockspur Island and Tybee Island to the Atlantic Ocean. Fort Pulaski, Tybee Beacon and the Tybee Lighthouse are identified. Tybee Island is the easternmost point in Georgia and is a popular tourist destination for tourists both from and outside the Savannah metro area. The other claim to fame of Tybee Island is that it is one of the few locations where the United States Air Force dropped an atomic bomb – by accident. In 1958, the 'Tybee Bomb' was dropped during a botched military training exercise. Even though the bomb did not detonate, there has been an ongoing cause for concern, since the bomb was never recovered. Myriad depth soundings are given as well as detailed notes on tides and sailing directions.

This chart was compiled by the hydrographic party under the command of Lieut. J. N. Maffitt and produced in 1851 under the Supervision of A. D. Bache, the most influential leader of the Coast Survey.