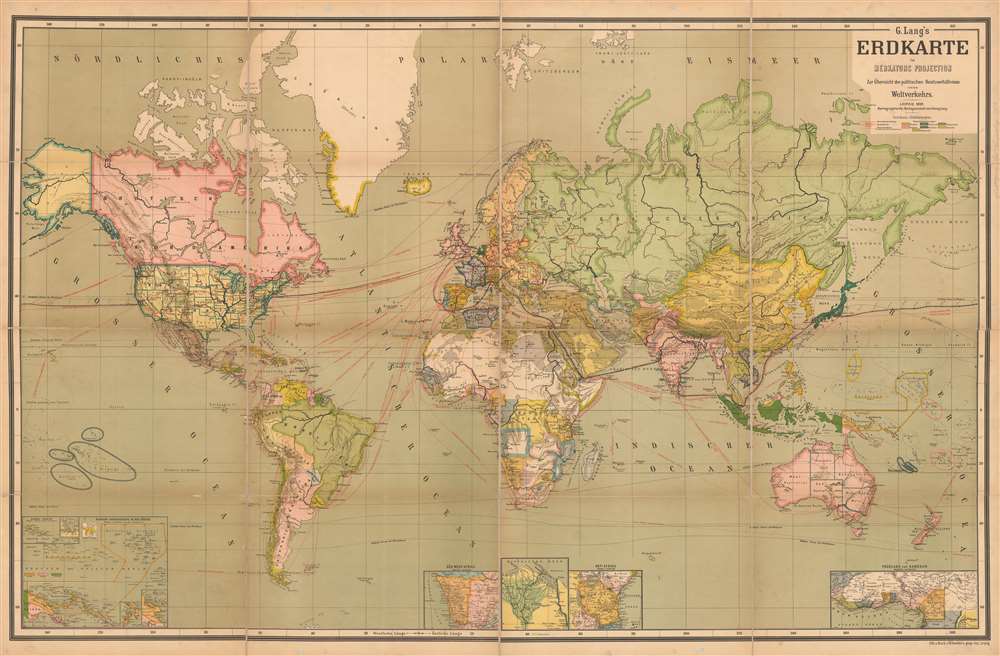 Manuscript record of an incredible circumnavigation!
$1,500.00

The map includes manuscript annotation chronicling a truly epic around-the-world voyage beginning in San Francisco and finishing in New York. The unknown but adventurous traveler set off from San Francisco on October 17 of 18th, crossing on the San Francisco - Yokohama line, reaching Japan on November 2nd. He then traveled overland through Japan, setting sail from Nagasaki to Hong Kong, from which he briefly visited Canton / Guangzhou. From this port he sailed south for Singapore, then Penang, Then Colombo. He moved on to Pondicherry and Calcutta, before heading inland by train to along the Ganges line to Agra, where he visited the Taj Mahal, Delhi, and Bombay. The voyage continued by sea to Aden through the Red Sea and the Suez Canal into the Mediterranean. The adventurer next lands at Italy, before completing a Grand Tour of Europe, passing through Austria, Switzerland, Germany, France, and returning to Genoa, from which he set sail for Gibraltar, taking a short inland detour to Madrid. He then visited Lisbon, traveled extensively in the British Isles, detours to Calais and Amsterdam, and made an astonishing voyage to the northernmost point in Norway, Kinnarodden. Returning south, he grabbed a steamer on the Liverpool - New York route. The traveler stopped dating his voyage in Japan, so we do not know how long the entire voyage took, nor do we know in what year/s it was completed, but we are nonetheless impressed.

There are at least two editions of this map, 1892 and 1902. The present first edition was copyrighted in Leipzig in 1892 and approved for use at schools by ministerial decree on May 18, 1893. This map is uncommon. We have identified one example of this edition at the Bayerische Staatsbibliothe (Bavarian State Library) and a 1902 edition at the British Library. No history of another example on the private market.

Georg Lang (f. 1892 - 1949) was a German map publisher active in Leipzig in the late 19th and first half of the 20th centuries. He is known for his impressive wall maps and diagrams published for schoolroom and general educational use. Lang exhibited along with Justus Perthes and Carl Flemming at the German Publisher booth at the 1893 Chicago Columbian Exposition. His cartographic work is often associated with the cartographer Eduard Gaebler (1842 - 1911). At some point he became associated with Hilmar Klasing and Co., a major cartographic firm.


Friedrich Eduard Gaebler (January 22, 1842 - November 8, 1911) was a German cartographer, engraver, publisher and lithographer based in Leipzig. Gabler was born in Pegau, Saxony, Germany. After receiving a basic education, he produced to master engraving and mapmaking at the Leipzig school of Albert Henry Payne. He worked with his brother, Rober Gaebler to develop a zincography-based pantatype printing process ideal for map work. In 1866 he established an institute for geographic studies, which he managed until 1874, when he took over George Westermann's (1810 - 1879) geographical institute. Westermann died in 1879 and Gaebler took over his geographical business, founding Eduard Gaeblers Geographisches Institut on December 5, 1879. He became successful providing top quality engraving and geographical work for a variety of publishers including Georg Lang and Carl Kiercke. When he died in 1911, the firm was taken over by his sons and remained active until 1935, when it declared bankruptcy. In 1941, the remains of the firm were acquired by the Deutschen Zentraldruckerei AG, which itself shut down in 1945.