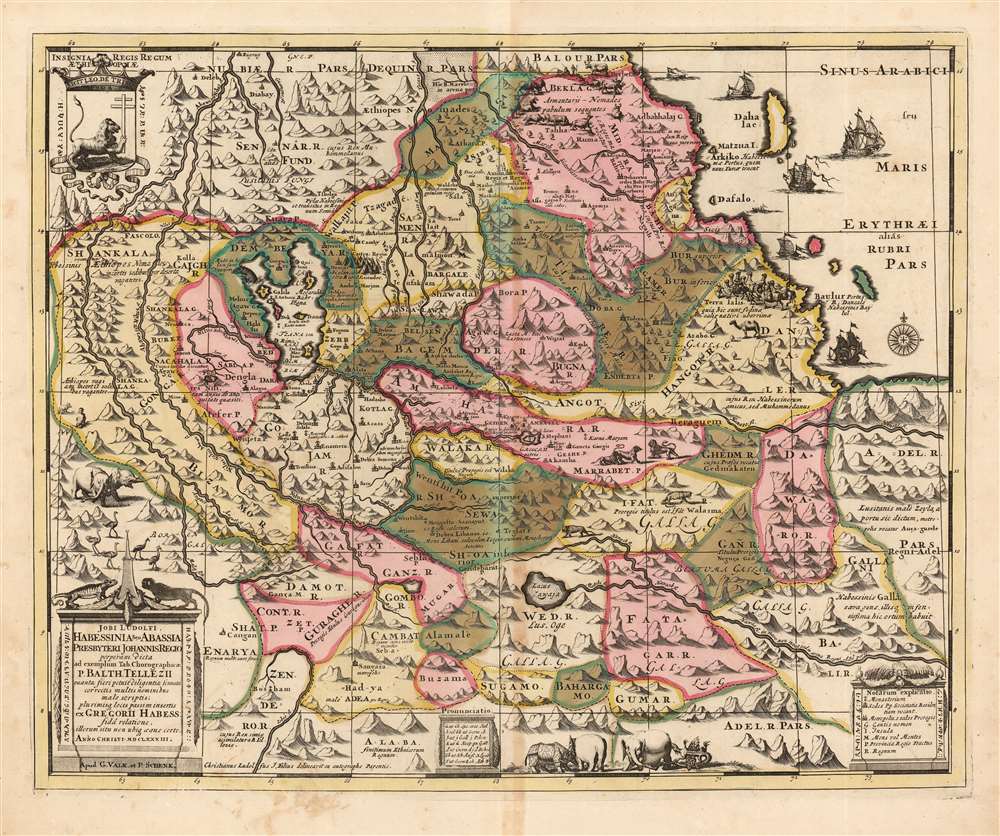 This is Job Ludolf's 1683 map of Ethiopia, the first acquirable map focusing on the headwaters of the Blue Nile, as well as the most influential - being copied by De Fer, Coronelli, and others well into the eighteenth century. The present example is the Valk and Schenk edition, in handsome original color.

Not the Kingdom of Prester John

This map first appeared in 1683, produced by Ludolf's son Christian. The map emphatically does not represent the kingdom of Prester John. The title refers to it specifically as 'Abyssinia, wrongly named the Kingdom of Prester John'. It is a beautifully engraved work, with dramatic pictorial mountains, a plenitude of elephants, camels, ostriches, a realistic rhinoceros, and a winged lizard. The map is rich in place names, derived from a long history of Portuguese Jesuit exploration. The attractive cartouches are embellished with Amharic text and in the arms of Emperor of Ethiopia appear in the upper left.

The present map was produced by Ludolf's son Christian from a manuscript map drawn by his father. In its title, the map credits a prior map by Baltazar Téllez, which provided the geographical model. It is perhaps puzzling that Hiob, or Job Ludolf, a German philologist, would be hailed as 'the most illustrious name in Ethiopic scholarship' given that he appears never to have visited the place. The strength of the contention lies in his work in learning and codifying the Amharic, with published grammars and dictionaries of both. His contact with these tongues came exclusively from an Ethiopian monk in Rome, Abba Gorgoryos, ('Gregorii Habess') with whom Ludolf developed a friendship. The precursor map's toponymy, being derived from Latinized Portuguese transliterations of the Amharic names, inspires a complaint in Ludolf's title cartouche: 'how great things could have been done by carefully correcting many ill-written names. Most of the passages have been inserted here and there from the trustworthy report of Gregory Habbess, but their situation is not everywhere and sure.' What is presented here is Ludolf's correction (assisted by the monk Gregory) of the Téllez map, which itself had a predecessor in a manuscript produced by another Portuguese Jesuit, Manuel de Almeida. Thus the map does not appear in isolation, but is rather the result of a long process of exploration and cartographic revision.

Correcting the Ptolemaic Model of the Nile

The Nile and its sources have long been of geographical interest. Claudius Ptolemy, in the second century C.E., proposed (somewhat correctly) that the river was fed by the two massive lakes, Zaire and Zaflan, which in turn were fed by streams from the Mountains of the Moon). Despite improvements in the mapping of Africa occurring throughout the age of discovery, no new geographic ideas supplanted the Ptolemaic model until the 17th century. In 1618, the Spanish Jesuit missionary Pedro Páez y Jaramillo was the first European to document the source of the Blue Nile as Lake Tana. Nevertheless, that information would not be presented cartographically for decades. While Almeida's work was not published in his lifetime, his manuscript contained a map. That original was lost, but a photographic copy survives in the Bibliotheque Nationale de France, depicting Lake Tana as a horizontally oriented bean-shaped body of water in the curl of the Blue Nile. Baltazar Téllez abridged Almeida's work in his own 1660 Historia Geral de Ethiopia, and he included a map - this one with the vertically oriented, heart-shaped Lake Tana as presented here. Both the Almeida manuscript and the Téllez disassociate the Nile from the Ptolemaic lakes and show the Nile flowing from the southeast part of Lake Tana around Gojam, before heading north. The Téllez accurately places Ethiopia's latitude, which Ludolf's map emphasizes. Yet another Jesuit-derived map of Abyssinia was published in 1674: a map credited to the Jesuit Francisco Eschinardi, entitled Imperii Abassini tabula geographica ex sculatis relationibus patrum soc. Jesu which appeared in Henri Justel's Recueil de divers Voyages faits en Afrique et en l'Amérique. This is quite rare on the market - we see only five examples at auction or in dealers' catalogs going back to 1993. It blends earlier Jesuit sources, weighing towards Almeida's bean-shaped Lake Tana. It is likely this depiction of the region that influenced Pierre DuVal in his 1679, four-sheet map of Africa, whose depiction of Lake Tana resembles that of the Eschinardi map.

Despite the abovementioned precursors, Ludolf's map was disproportionately influential and in that respect is the more important map. Almeda's map never saw print. Téllez' 1660 history was scarce even within its author's lifetime and now his map is present in only a handful of institutional collections. Curiously, its rarity, and that of the entire Historia Geral de Ethiopia, may be a result of the 18th century explorer James Bruce's efforts to destroy the work, which revealed that his own discoveries were secondary to those of Portuguese Jesuits more than a century earlier. Both the 1674 Eschinardi and the 1679 DuVal maps are quite rare. Thus, the publication of the Ludolf in 1683, and the subsequent printings of the plate by Valk and Schenk, disseminated the knowledge of Lake Tana to a broader audience. That audience included the illustrious Venetian globemaker Vincenzo Coronelli, who swiftly incorporated the new depiction of the source of the Nile into his work, crediting Ludolf among his other sources.

This was engraved either by, or for, Christian Ludolf in 1683, possibly in Frankfurt, for inclusion in an edition of the elder Ludolf's history of Ethiopia. The plate was thereafter acquired by the Amsterdam publishers Valk and Schenk, who would include the map in their atlases. We see perhaps twenty-five examples in OCLC.

Hiob or Job Ludolf (Iobus Ludolfus; June 156, 1624 - April 8, 1704) was a German orientalist, linguist, and philologist. He has been hailed as having earned 'the most illustrious name in Ethiopic scholarship.' He studied philology at Erfurt academy and Leiden university, but thereafter traveled broadly to build a daunting collection of languages (he is understood to have had familiarity with twenty five, and was a correspondent on the subject of linguistics with Leibniz.) During a visit to Rome, he met and befriended Abba Gorgoryos, a monk from the Ethiopian province of Amhara. From him, Ludolf was able to learn the Amharan Ethiopic language. Ludolf's Ethiopic and Amharic works were for more than a century the best means for a European to learn those languages, and his history of Ethiopia remains important to this day. His interest in Ethiopia would not be limited to history and linguistics: he attempted to promote European trade with Ethiopia, even visiting England in 1683 to do so. His efforts failed, primarily due to resistance on the part of the leadership of the Ethiopian Orthodox Church. Thereafter he returned to Frankfurt in 1684 to write; in 1690 he became president of the Collegium Imperiale Historicum. Learn More...

Very good. Some toning at centerfold, else excellent with a bold strike and rich original color.