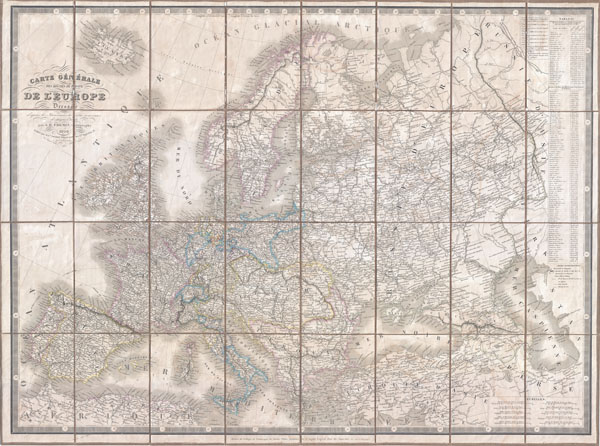 An extremely scarce 1844 postal map of Europe in case or pocket format by the French map publishers A. Logerot and A. R. Fremin. Details the whole of Europe noting thousands of towns, cities, and villages as well as the roads that connect them. Shows mileage for each section of road - an almost incomprehensible feat considering the vast area this map covers. Includes Iceland and shows shipping lanes throughout. Countries outlined in various pastels. Keyboard style border. All in all, a stunning map and a remarkable cartographic achievement.

Auguste Logerot (fl. c. 1839 - c. 1880) was a French map and general interest publisher active throughout the mid to late 19th century. A. Logerot worked with other French publishers, cartographers and engravers of the period including Fremin, Dufour, Dyonnet, and Vuillemin. He published a large corpus of map and geographical atlases, though few of his map represented unique or exceptionally interesting work. This exception are his wonderful jigsaw puzzle maps - a style popular in 19th century France. Jigsaw puzzle maps are a kind of educational map printed on board and carved up in puzzle format. Logerot's imprint is frequently misprinted as Lagerot or Logeret. Logerot shared offices with several other publishers, printers and engravers at Quai des Augustins 55, Paris. Little else is known of Logerot's life and work.


A. R. Fremin (fl. c. 1810 - c. 1860) was a French geographer active in the early to mid 19th century. He is known to have been a student of the cartographer Jean-Baptiste Poirson. Fremin drew and compiled maps for many prominent French cartographic publishers of the period including Tardieu, Logerot, Dufour, Monin, Duvotenay, Dyonnet, and Vuillemin. Little else is known of Fremin's life and work.

Very good condition. Light overall toning. Dissected and mounted on linen in 24 panels.
Looking for a high-resolution scan of this?