1943 Minneapolis Morning Tribune Map of Europe Before the Allied Invasion 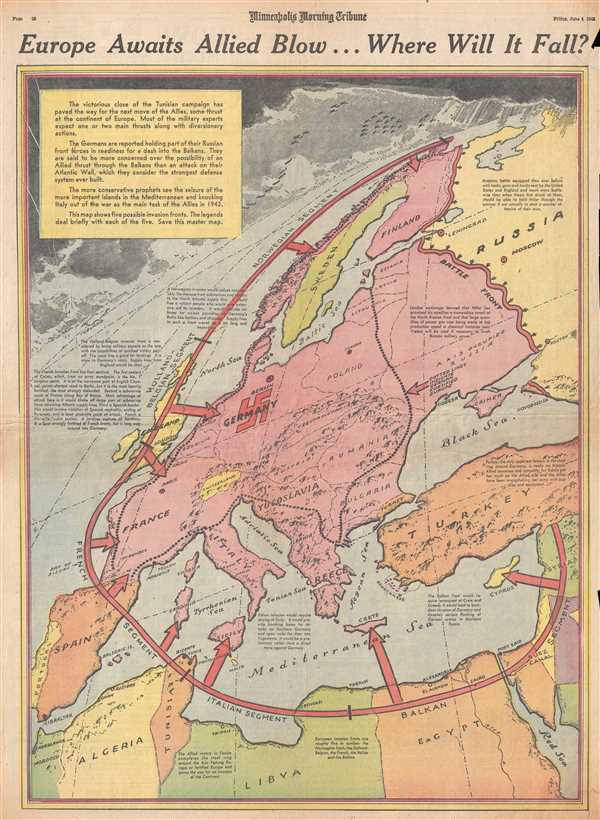 1943 Minneapolis Morning Tribune Map of Europe Before the Allied Invasion

Five presumed options for the Allied invasion of continental Europe - where would they decide to land troops?
$300.00

This is a Friday, June 4, 1943 Minneapolis Morning Tribune map of Europe preparing for the presumed upcoming Allied invasion. The map depicts the continent from the Atlantic Ocean to the Eastern Front between the Russians and the Germans (which was not far from Moscow and Leningrad) and from the Arctic Ocean to North Africa. Known as 'Fortress Europe', Nazi Germany had fortified the continent since their Spring 1940 offensive had conquered all of Western Europe and thrown the British off the continent. Since June 1941, the only front on the continent had been the fought between the Russians and the Germans in Eastern Europe, and Stalin was eager for a second front to be opened in the western part of the continent. Here, the relative unknown of where the Allies would land an invasion force is graphically illustrated in such a way that the immense amount of possibilities for the invasion become evident. Hitler feared the coming invasion, believing it to be a certainty, and fortified as much of the continent as possible.

Stylistically this map owes a debt to the work of Richard Edes Harrison, an American illustrator and cartographer who, working for Fortune magazine, pioneered a new style of representing the world for WWII era propaganda maps. Edes developed the convention of using spherical perspective with an exaggerated vertical dimension, as on the present map, to illustrate part of the world as part of a greater global situation. This map was printed by the Minneapolis Morning Tribune on Friday, June 4, 1943.