1817 Thomson Map of Greece, the Balkans and Ukraine 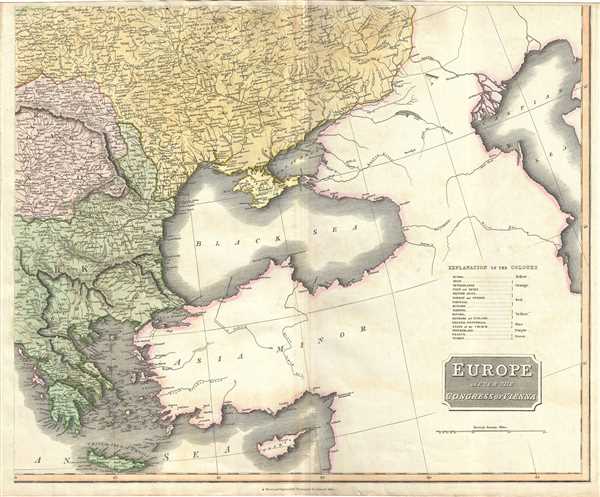 1817 Thomson Map of Greece, the Balkans and Ukraine

Beautiful Thomson map focusing on the southeastern parts of Europe.
$250.00

This is an attractive 1817 map of Greece, the Balkans and Ukraine by the Edinburgh cartographer John Thomson. It depicts the region from Greece north to include the southern portions of Ukraine, including Crimea. Includes the whole or part of the modern day nations of Greece, Albania, Macedonia, Bulgaria, Romania, Moldova, Serbia and Hungary. Rivers, mountains and other topographical features are noted.

As the title suggest, this map was issued to depict the territories as set by the Congress of Vienna in 1815. The regions are color coded with an explanation of the colors included in the lower right quadrant of the map. Following the defeat of Napoleonic France, the conference in Vienna set to resize the main powers so they could balance each other off and remain at peace. Europe under a new peaceful balance of power was centered on the five most important powers (also referred to as the five ‘Great Powers') of the United Kingdom, France, Russia, Prussia and the Austrian empire. Alas, the ‘peace' was but an illusion and Europe was anything but calm. Old rivalries would fester and soon nationalism, liberalism, revolution (industrial and otherwise) would once again be on the rise across Europe.

This map is a part of a Thomson’s larger 4 map set of Europe. Thomson's work, including this map, represents some of the finest cartographic art of the 19th century. His maps are known for their stunning color, awe-inspiring size, and magnificent detail. This map was prepared by John Thomson for inclusion in the 1817 edition of his New General Atlas.