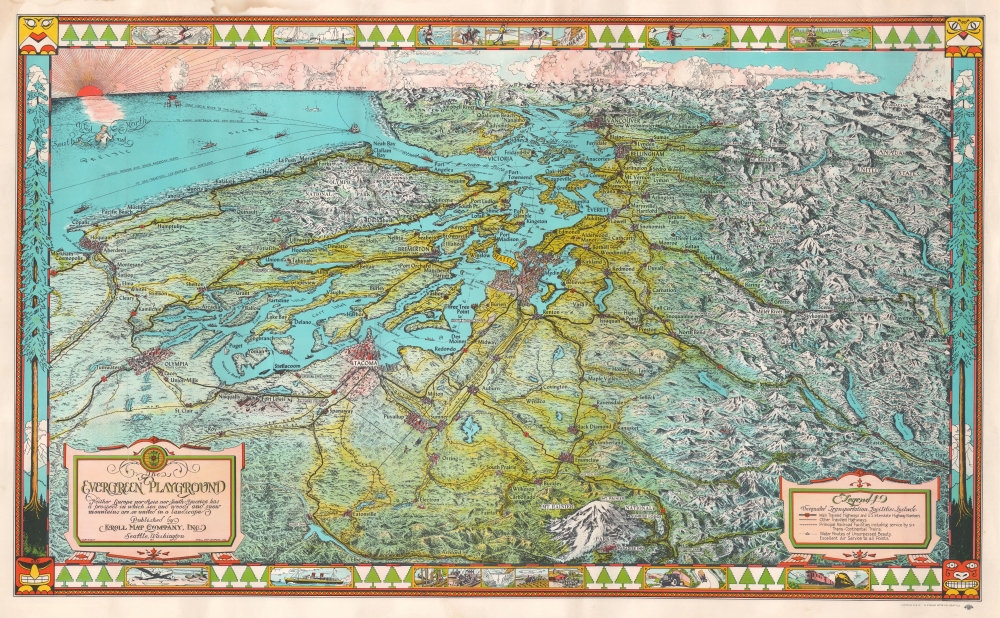 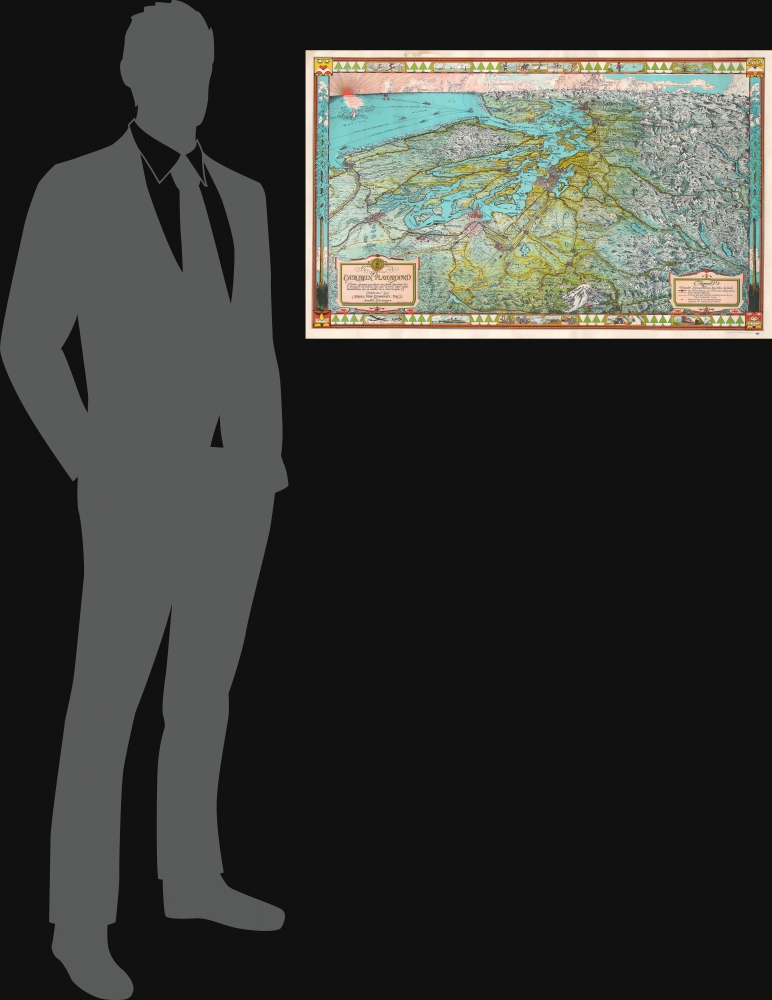 A stunning 1945 Kroll Map Company pictorial bird's-eye view map of the Pacific Northwest, the Puget Sound, and the surrounding region, including Seattle, Tacoma, and Olympia, Washington, and Vancouver, British Columbia. Oriented to the west-northwest, the map depicts from the Pacific Ocean to the mountains east of Seattle and from the Canadian Rockies north of Vancouver to Mount Rainier. Individual buildings in Seattle, Tacoma, Olympia, and Vancouver are illustrated, including the state capitol building in Olympia. The Seattle-Tacoma airport is also labeled. Both Olympic National Park and Mount Rainier National Park are depicted in detail, with several locations labeled within the park, such as Paradise Inn on the slopes of Mount Rainier. Other buildings in secluded areas are illustrated, among them the Big Four Inn, the Mt. Baker Lodge, and the Harrison Hot Springs.

The highway network is easily discernible, with routes labeled by number and by nickname: National Park Highway, the Pacific Highway, and the Olympic Highway. Railroads are also illustrated and labeled, including the Northern Pacific Railroad and the Great Northern Railroad. Vancouver Island is identified, along with the Strait of Juan de Fuca, bays, points, and other coastal locations. Several ships are illustrated in the Strait of Juan de Fuca or the Pacific, on their way to or from Puget Sound, on the 'Great Circle Route to the Orient', the route to Hawaii and Australia, or possibly South America. A compass rose, indicating orientation is situated in the upper right, with a mermaid at the center holding a trident functional as the compass needle.

The map's border adds to its charm. Along the sides are Lodgepole Pines, trees native to the Pacific Northwest. In the corners, Native American iconography typical of the region, offers historical context. Vignettes along the top highlight outdoor activities, such as skiing, sailing, tennis, horseback riding, fishing, and hunting. At the bottom, modern technological advances are depicted, including the newest locomotive, trucks for long-haul transportation, factories, and a B-29 Superfortress.

This map was drawn by Edwin Poland, printed by the North Pacific Bank Note Company, and published by the Kroll Map Company of Seattle in 1945. There are at least three states of this map, but probably more, with the first published in 1933 (when the original copyright was filed). The major differences between the two editions are noticeable in the border, where certain vignettes are replaced for later editions. There is also an edition repurposed for advertising with a red arrow at top center. We have also seen a black and white version. We note six examples cataloged in OCLC and are part of the collections at the University of Michigan, the University of Wisconsin-Milwaukee, the University of Arizona, the University of Oregon, the University of Washington, and the Seattle Public Library. There is additionally an example at the David Rumsey Map Collection at Stanford.

Kroll Map Company (1911 - Present) is a Seattle-based map company. Founded in 1911 when Carl Kroll acquired both Anderson Map Company and Washington Map and Blueprint Company, both of which had been in business since the 1870s. From its inception, Kroll Map Company has ‘focused on mapping for real estate and local government, custom mapping, and the publication of numerous general mapping products.’ Carl Kroll sold a half-share of the company to John Loacker, his close friend and employee, in 1920. Loacker then purchased the company outright in 1925. He maintained the feel of a family business by working with his son Waldemar, who eventually took over. Waldemar J. Loacker (April 16, 1902 - February 12, 1995) worked at Kroll for the rest of his life, only leaving the company after suffering a stroke in 1992. Then his son John Loacker (b. 1955), who began working at Kroll in his youth, officially inherited the business and continues operating it to this day. In 1999, Kroll Map Company and Metsker Maps of Seattle formed a partnership of ‘two historic Seattle businesses.’ Today, the Kroll Map Company creates custom maps for individuals worldwide. Learn More...


Edwin Christian Poland (December 14, 1903 - October 13, 1991) was an American draftsman and artist. Born in Chehalis, Washington, and the son of Marth and Hans Poland, he lived in Seattle, Washington and worked for the Kroll Map Company beginning as early as 1930. Poland married Geneva Brown on August 22, 1943. Learn More...