1910 Levering and Puck Magazine Political Cartoon of Corruption in America 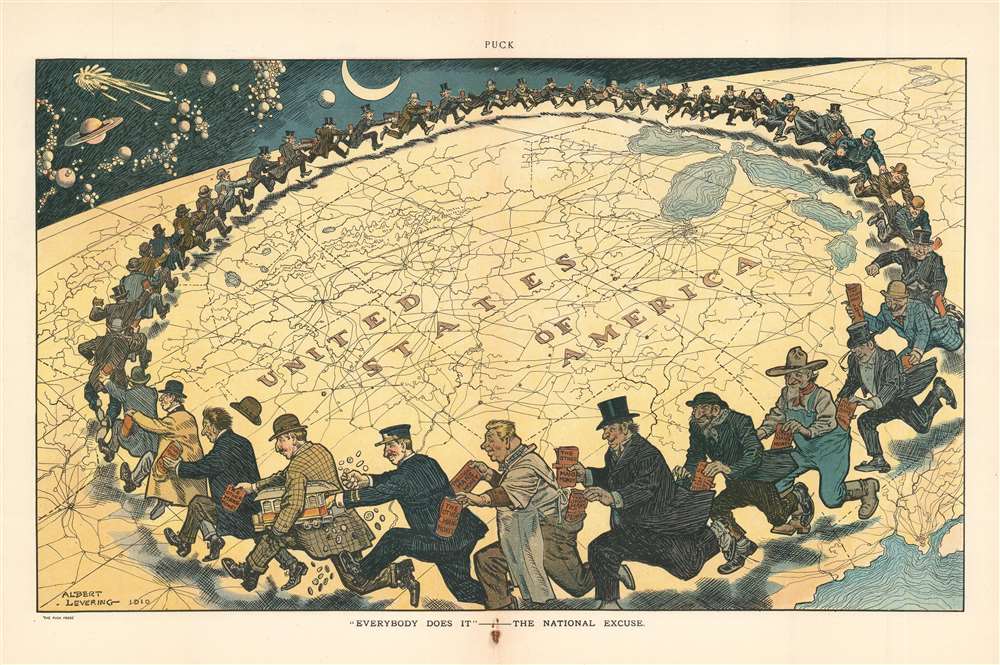 1910 Levering and Puck Magazine Political Cartoon of Corruption in America

This is a 1910 Albert Levering political cartoon criticizing corruption in the United States. A circle of men, each in a different professional suit, surround a map of the United States. Each, no matter his profession, is stealing a billfold marked 'The Other Man's Money' out of the pocket of the man in front of him. The cartoon's title 'Everybody Does It,' lampoons the notion that, if everyone in the country has money stolen from them by one person or another, then they have the right to steal from someone else, since, undoubtedly, that person is stealing money from yet another person anyway! The cartoon is criticizing the notion that such rapacious behavior doesn't matter - that just because everyone doing it, it is no more acceptable.

This cartoon was created by Albert Levering and published in the February 23, 1910 issue of Puck. One example is listed at the Library of Congress, but this piece is not catalogued in OCLC.

Albert Levering (1869 - April 14, 1929) was an American architect and cartoonist. Born in Hope, Indiana, Levering's father was an architect, who moved the family to Kansas City, Missouri, in 1882. Levering appears to have learned architecture from his father, Levi Levering, and worked with his father's firm from from 1887 until at least 1894, when he moved to Minneapolis in 1894. By 1895, Levering was a staff artist for the Minneapolis Journal and was studying with Burt Harwood. He moved to Chicago, Illinois, in 1896 and began working for the Chicago Tribune as an artist. Apparently, Levering chose not to stay in Chicago very long, because obituaries state that he moved to New York City in 1896. Sometime in the late 1890s, Levering spent two years studying art at the National Academy in Munich, Germany, and was back in New York by 1900, per the 1900 U.S. Census. That year he contributed work to Harper's Monthly Magazine, and Harper's Weekly. During his career, Levering also worked on the staff at Puck and Life, and illustrated several book, some of which included Grimm Tales Made Gay, Mollie and the Unwiseman, and Alice in Blunderland. Levering married Frances Jewell Youngling on May 31, 1905. Learn More...

Levering, A. ''Everybody Does It' - The National Excuse,' Puck, Vol. LXVII, No. 1721. (Puck: New York) February 23, 1910.     Puck (1871 - 1918) was the first successful humor magazine in the United States and featured colorful cartoons, caricatures, and political satire. Founded by Joseph Keppler in St. Louis, Puck began publishing both an English and a German language edition in March 1871. The German edition moved to New York City five years later and published its first issue there on September 27, 1876, and the English edition soon followed and began publishing from New York on March 14, 1877. 'Puckish' means 'childishly mischievous'm which led to Shakespeare's Puck (from A Midsummer Night's Dream) to be recreated as the mascot of the magazine and for his name to become its title. Each issue featured a full-color political cartoon on the front cover, a full-color non-political cartoon on the back cover, and a two-page centerfold that usually addressed a political topic as well. In 1893, Keppler moved the magazine to Chicago and published smaller editions of Puck from the Chicago World's Fair. Keppler died in 1893, and Henry Cutler Bunner, who had been editor since 1877, took over. Bunner operated the magazine until he passed away in 1896, which left Harry Leon Wilson in charge until his resignation in 1902. The German edition was published until 1897. Joseph Keppler, Jr. then became editor. William Randolph Hearst bought the magazine in 1916 and operated it for another two years until the final issue was distributed on September 5, 1918.

Library of Congress AP101.P7 1910.
Looking for a high-resolution scan of this?