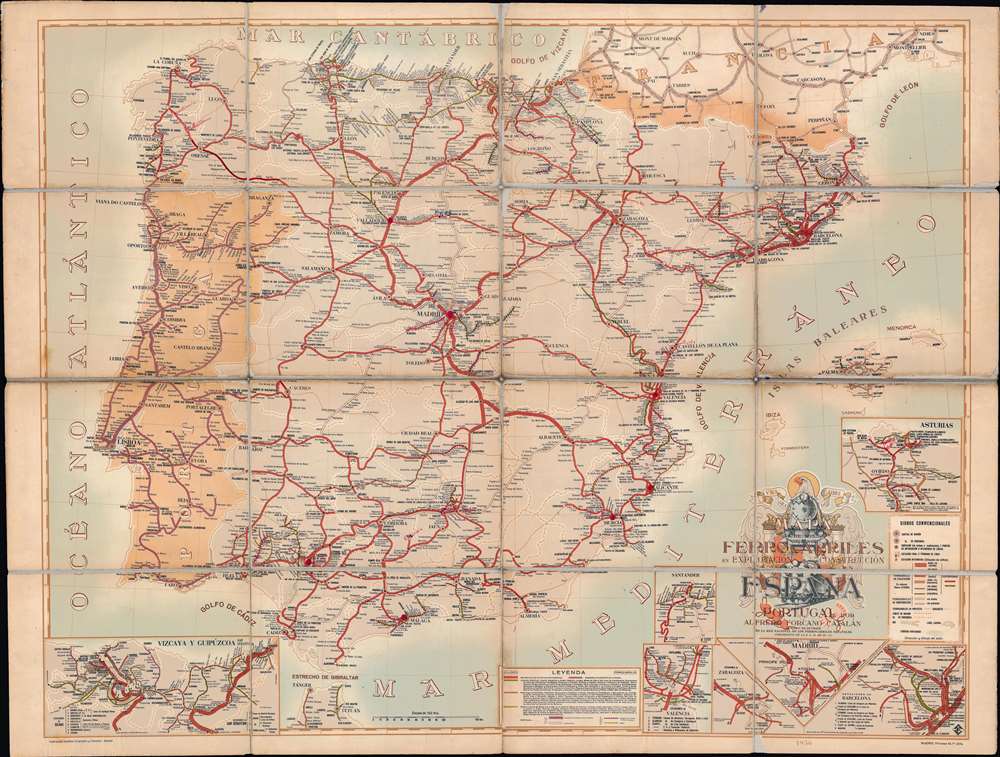 This is a striking 1956 Instituto Geográfico y Catastral map of Spain and Portugal and their national railroad networks. The Instituto Geográfico deftly employs color coding to differentiate between rail lines. The solid red lines, which dominate the map, illustrate the Spanish national railway network. Thin purple rail lines, which appear almost exclusively in the various insets situated around the border, are operated only by the Spanish government. Green and orange lines represent independent railroad companies. Importantly, wide gauge lines are illustrated by the wider lines, while the skinnier lines trace narrow gauge routes. Blank or white coding indicate railroads under construction. A key appears in the bottom right, with the leyendasignos conviencionales along the right border.

Seven inset maps focus on Spanish cities: Madrid, Barcelona, Zaragoza, Santander, and Valencia. Intriguingly, the Madrid map takes the form of a triangle, an unusual choice for a mapmaker. A map illustrating Asturias and its vicinity appears above the legend along the right. A further inset of Vizcaya y Guipuzcoa, the Basque region that includes Bilbao and San Sebastián, appears in the lower left.

This map was created and published by the Instituto Geográfico y Catastral in 1956. Two examples are cataloged in OCLC and are part of the institutional collections at the University of Illinois Urbana-Champaign and the Biblioteca Nacional de España. However, the OCLC entry is unclear whether or not the institutions hold the 1956 edition or a different edition of the same title.