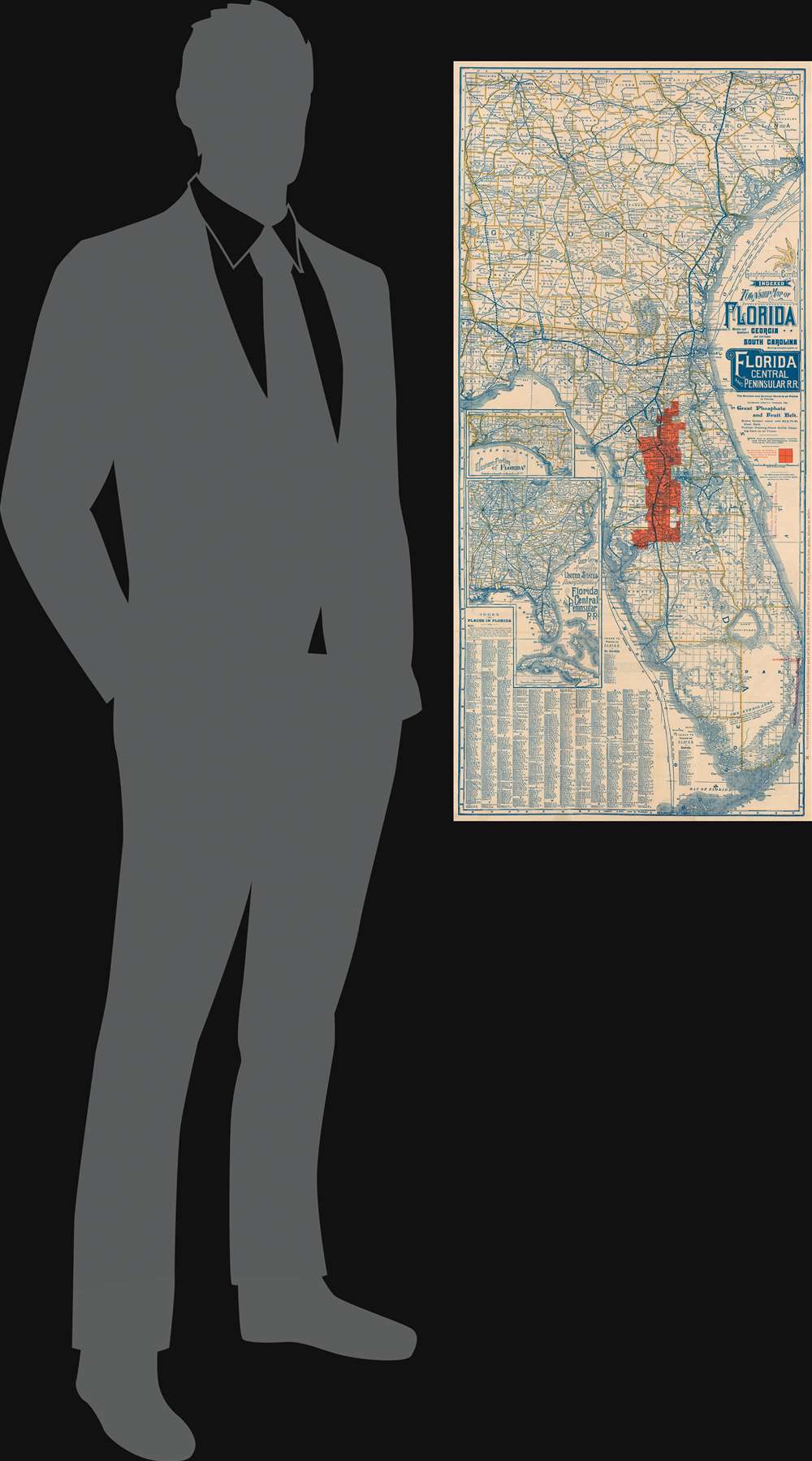 Geographically Correct Indexed Township Map of Florida, Middle and Southern Georgia, and Southern South Carolina, Showing the complete system of Florida Central and Peninsular R.R.. The shortest and Quickest Route to all Points in Florida extending directly through the Great Phosphate and Fruit Belt.
1894 (dated)     37.5 x 17.5 in (95.25 x 44.45 cm)     1 : 1126400

A rare 1894 map of Florida and Georgia illustrating the Florida Central and Peninsular Railroad at its peak, with provenance to Florida real-estate pioneer Elnathan T. Field. The map was issued not only to highlight the FCP achievements in reaching Tampa and St. Petersburg, but also to promote and sell the extensive properties straddling the railroad grant. These are shaded bright orange and are unmistakable. Intriguingly, the map also exhibits magenta overprinting promoting beachfront property from Jupiter to Miami Beach - in particular Hypoluxo Beach, near Lake Worth, which is further promoted on the verso. This is the earliest known printed map of Hypoluxo Beach, issued just after the barrier island was lotted out for sale and the earliest known promotion of Miami Beach as 'resort property'.

Overprinting on the front, and on the verso promote real estate in Hypoluxo Beach - today a stunning resort community just south of Palm Beach. The unusual name is believed to be derived from an old Seminole word meaning 'Island', although it may be from the Greek 'hypo-' and '-lux', meaning 'Under Light'. In the late 1880s, about 65 miles of oceanfront property extending, as shown here with magenta 'x's from Hypoluxo to Cape Florida (Miami Beach) was acquired by Elnathan T. Field (1838 - 1919) and Ezra A. Osborn, both of Middletown New Jersey. They planned to develop the real estate as a large coconut plantation. For this prime real-estate, they paid a whopping 75 cents to 1.25 USD per acre. Efforts to develop coconut plantations failed and so in the early 1890s, Field began selling it off as 'resort' real estate under the name Hypoluxo Beach Company. This map, printed in 1894, features a map of Hypoluxo Beach on the verso - representing Field's initial lotting of the land and attempts to capitalize on the growing Florida land market. Fields's name appears printed on the map, but it also bears his ownership stamp, suggesting this was his personal copy. As the Florida East Coast Railroad had not yet extended beyond West Palm Beach, the real estate moved slowly. Field divested in 1909, selling the real estate at a bargain price to Miami Beach founder John Stiles Collins (1837-1928).

The Florida Central and Peninsular Railroad

The FCP was a network of railroads stretching from South Carolina to Tampa. It was Florida's first major railroad network, and the first to serve central peninsular Florida, predating Flagler's Florida East Coast Railroad by decades. It began in 1832 with the Tallahassee Rail Road, connecting Tallahassee to the Gulf of Mexico. In the 1850s the Florida, Atlantic and Gulf Central Railroad (FAGC, January 24, 1851) and the Pensacola and Georgia Railroad (PGR, January 1853) were chartered. These merged in 1869, acquiring the Tallahassee Railroad. The Pensacola and Georgia acquired the Tallahassee in 1855, and then merged with the FAGC in 1869, forming the Jacksonville, Pensacola and Mobile Railroad (JPM). The JPM acquired trackage and land rights over the Florida Central Railroad (FCR), extending their line to Cedar Key, Orlando, and ultimately Tampa. The network reached its height in 1893, when it reorganized as the Florida Central and Peninsular Railroad. From 1900, the FCP became the Seaboard Air Line Railway and much of the network remains active today.

The earliest known example of this map dates to 1886, after which it was updated annually to about 1900. The present example was printed in 1894 by the Matthews Northrup Company for the Florida Central and Peninsular Railroad. It features overprinting in magenta promoting the sale of Field and Osborne's oceanfront lands between Jupiter and Miami. It is not clear if Field simply appropriated the FCP map for his own needs, or if he had a partnership with the FCP, or Matthews Northrup. Evidence suggests that the recto and verso were printed separately. The verso content bears the imprint of 'Standard Print, Red Bank, N. J.' Only the 1894 editions bear the Hypoluxo / Field overprinting and the map of Hypoluxo on the verso. Earlier and later editions feature content promoting the FCP on the verso. We note examples at the University of Southern Florida and at the Touchton Map Library at the Tampa Bay History Center.