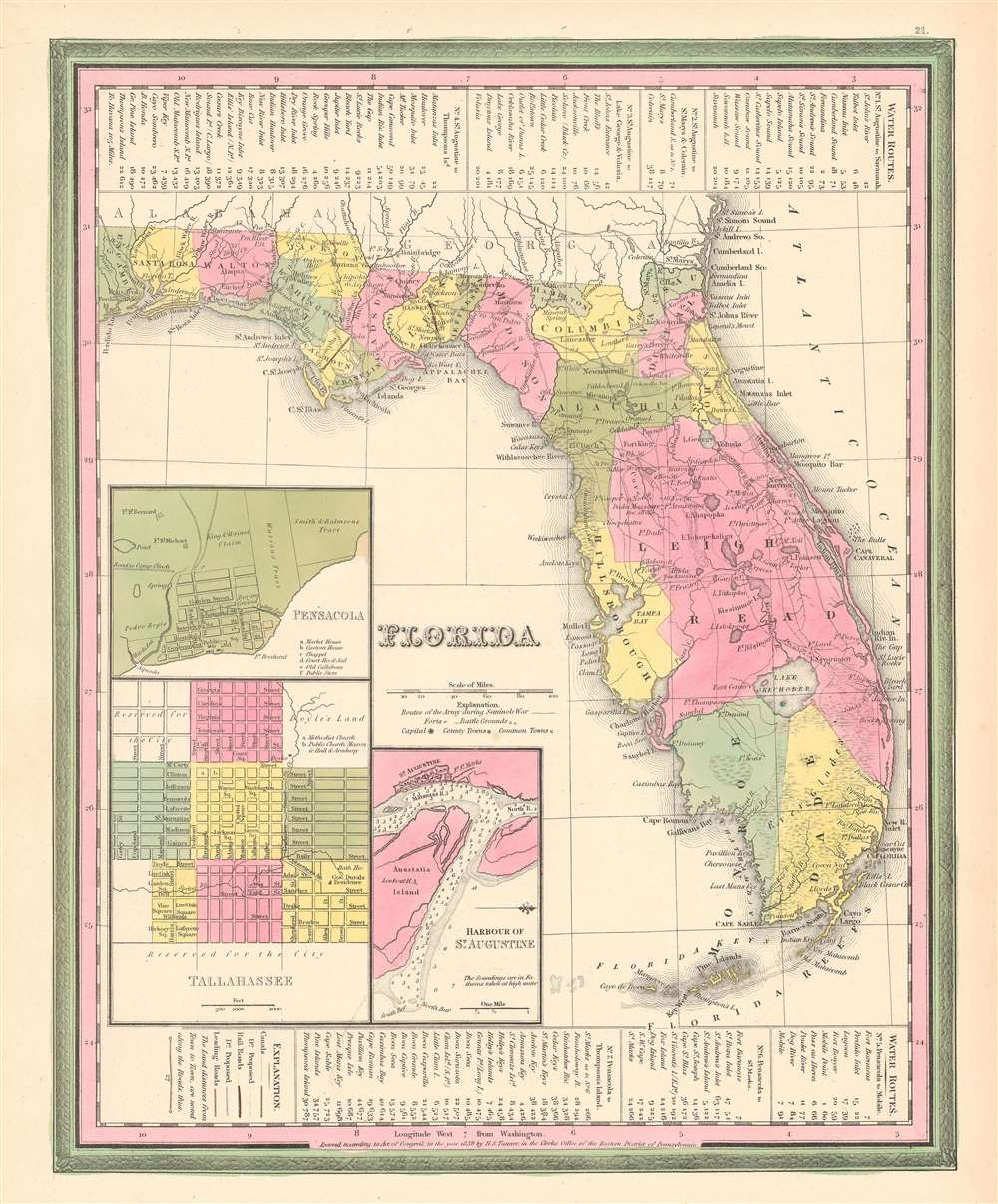 This is a first edition 1846 Samuel Augustus Mitchell and Henry Schenck Tanner map of Florida, notable as being one of the few maps to include the ephemeral Leigh Read County (Mosquito County). The map depicts Florida in full, from the Perdido River to the Atlantic Ocean and from Georgia and Alabama to Key West. Roads connecting the towns, forts, and other settlements are illustrated, along with railroads (there were only 2 at the time) and canals. Inset maps in the lower left corner detail the cities of Pensacola and Tallahassee and the harbor of St. Augustine. Information concerning water routes is included along the top and bottom borders. The whole is surrounded by the Carey and Hart border, which Mitchell only used in this first edition of the atlas.

This map is most significant for its inclusion of the ephemeral Leigh Read County, occupying most of east central Florida. In 1842, Florida Democrats proposed a bill that would have renamed 'Mosquito County' (modern-day Orange, Seminole, and Volusia Counties, and parts of Lake, Osceola, Polk, and Brevard) as 'Leigh Read County', in honor of Leigh Read, a recently assassinated general and legislator. The name change was never officially adopted, and accounts differ as to why. Some claim the legislative clerk withheld the bill, other argue that Governor Richard K. Call refused to sign it, still others claim that Governor Call did indeed sign it, 'but through some misadventure the law never appeared on the books'. Regardless, the county did appear on a few maps of the period - see census below.

Leigh Read was born in Tennessee, served as a militia general during the Second Seminole War (1835 - 1842), and was a delegate to the Convention of 1837 lobbying for Florida statehood. Read and fellow Florida Democrats passed a constitutional amendment to prohibit the sale of bonds by the territorial government. The bill garnered Read a host of enemies who would have profited from the bond sales, among them former friend, Augustus Alston. In retribution, Alston challenged Read to a duel, a method frequently used Florida Whigs to dominate territorial politics. Read initially refused the challenge, but, after being ridiculed as a coward, finally agreed. As the challenged, Read selected the weapon, Yager Rifles, and a site in Georgia (to avoid Florida's dueling ban). Alston, a confident and experienced dueler, and told his wife to have a sumptuous dinner ready on his return. On chilly morning in December 1839, Alston and Read faced off. The dueling protocol called for each to take four steps, turn, and fire. As Read and Alston separated, Alston stumbled and misfired. Read, on the other hand, calmly took aim at Alston's chest and fired, killing him instantly. Alston's sister, it is said, dug the bloody slug out of Alston's chest and sent it to his brother Willis Alston, then living in Texas. Bent on vengeance, Willis Alston travelled to Florida in January 1840 with a new bullet made from the old slug. He found Read at the Brown Hotel celebrating his election as the presiding officer of the territorial legislature. Alston shot Read in the shoulder, but Read returned fire, hitting Alston in the hand. Alston then stabbed Read with a Bowie knife and fled. While Read recovered from this attack, Alston was undeterred, attempting a second attack, firing unsuccessfully into Read's carriage. Alston made a third attempt on Read's life on April 26, 1841. Read was crossing a Tallahassee street when Alston shot him in the back with a shotgun, followed by a second blast to the chest, killing him. Alston was arrested, but allowed to post bond after which he fled to Texas. Shortly thereafter, the hotheaded Alston quarreled with and murdered a popular Texas doctor. A mob of as many as thirty Texans extracted frontier justice, dragged Alston out of town and 'executed him, each man taking a shot'.

The Seminole were a composite tribe formed from various southeastern American Indian tribes that were relocated to a large reservation in Central Florida. These included the Alabamas, Choctaw, Yamasees, Yuchis and Creek people, as well as escaped slaves.

In 1834 the United States government forced the Seminole to sign the Treat of Payne's Landing, which gave the tribe three years to move west of the Mississippi and join the Creek in the Indian Territory. The Seminole, rightly claiming unfair negotiations, renounced the treaty and, instead of moving west, entrenched themselves in the Florida swamps. The subsequent war proved long and bloody, with neither side gaining a solid early advantage. Ultimately, the superior resources and numbers of the United States military proved decisive. Most of the Seminole were removed to the Indian Territory (Oklahoma) while the remaining Seminole in Florida settled in large informal reservation located between Lake Okeechobee and Tampa.

The Second Seminole War on this Map

Movements of United States Army in southern Florida are traced and illustrated. Important forts are identified throughout. Several battles are referenced simply by date, and one, Dade's Massacre, by name. Dade's Massacre was a defeat of U.S. Army by the Seminole wherein 110 soldiers, led by Major Francis L. Dade, were ambushed and slaughtered.

This map was engraved by J. H. Young and first published by Henry Schenck Tanner in 1839. Under Tanner and 'Carey and Hart', who acquired the map plate in the 1840s, the map went through several states and significant revisions. Carey and Hart added their distinctive border and published the first edition to include a proposed Leigh Read County, in 1845. Carey and Hart subsequently sold the map plates to Samuel Augustus Mitchell Sr. in 1845. Mitchell used them as the basis the 1846 first edition of his A New Universal Atlas. Later in 1846 he issued a second edition, replacing the Carey and Hart borders with his own distinctive strapwork border. Mitchell himself revised the plate several times to keep currently with fast-changing Florida politics before selling it to Thomas Cowperthwait and Company, who continued to publish the 'Mitchell' atlas until the late 1850s.

Due to a long publication run, confusing publication history, and lack of serious research, Mitchell atlas maps are considered 'common.' Nonetheless, the first edition, with the Carey and Hart borders, is in fact quite rare and some of the unique maps from that edition of the atlas, like the present 'Leigh Read' Florida are both cartographically significant and scarce.


Henry Schenck Tanner (1786 - May 18, 1858) was one of the preeminent American map engravers and publishers of the early 19th century - what is considered to be the "Golden Age of American Map Publishing". Born in New York City but based in Philadelphia, Tanner's forty plus year career was almost entirely focused on cartographic work. His earliest map work appears in conjunction with another important map publisher, John Melish. Early in his career, Tanner partnered with his brother Benjamin, to engrave extensively for Melish as well as other Philadelphia publishers including Lucas Fielding (Baltimore), A. Bourne, Jason Torey, Samuel Harrison, and Samuel Lewis, among others. In 1818 Tanner convinced his fellow publishers and partners to finance the compilation of a New American Atlas. The atlas was sold by subscription and slowly emerged between 1819 and 1823. The New American Atlas, possibly the pinnacle of 19th century American cartography and was commended in its day as "one of the most splendid works of the kind ever executed in this country". It was subsequently republished in several updated editions until about 1839. Tanner had by this time become the most active and influential map publisher in the United States. Around 1832, recognizing the market for a less cost prohibitive atlas, Tanner began work on the smaller format New Universal Atlas. This popular and important atlas went through numerous editions before being bought out by Carey and Hart, and then, in 1846, by S. A. Mitchell, who would rise to become the preeminent publisher of the next generation. In addition to these important atlases, Tanner also issued numerous extremely important and influential travelers guides, state maps, wall maps, and pocket maps. He should not be confused with his brother, also an America map engraver, the New Yorker Benjamin Tanner. Learn More...