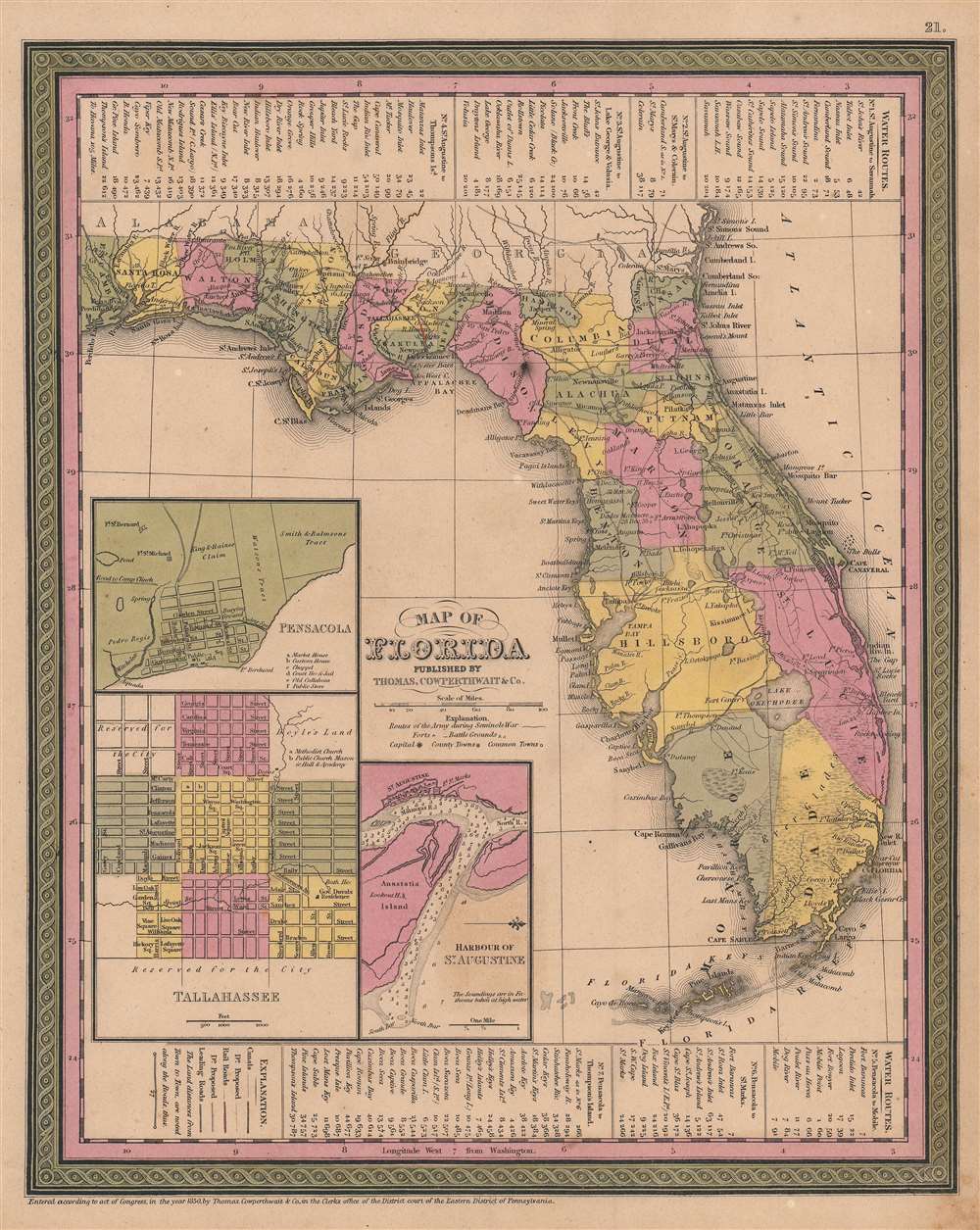 This is an 1850 Samuel Augustus Mitchell Sr. / Thomas Cowperthwait map of Florida. The map falls in the Tanner / Mitchell tradition, wherein original 1830s maps of Tanner were updated regularly to about 1858. In addition to meeting the standard cartographic conventions established in the Mitchell/Tanner tradition, this map includes multiple historically significant elements easily missed. Red manuscript highlights two railroads in the Florida Panhandle: the Tallahassee Railroad (see below) and the 'Lake Wimico and St. Joseph Canal and Railroad' - the first railroads in Florida. As well, dates in Marion, Benton, and St. Lucie counties mark battles of the Second Seminole War (1835 - 1842).

The Tallahassee Railroad Company was incorporated in 1834, following two earlier unsuccessful attempts to charter a railroad between Tallahassee and the St. Marks River. The railroad, constructed simply from wooden rails capped with iron, reached St. Marks in 1836 or 1837. In 1839, the railroad crossed the St. Marks River to what became Port Leon, where the Florida Territory granted land for a freight terminal. By operating their own freight terminal, the railroad had full control over transferring goods between the railroad and ships. The Tallahassee Railroad operated mostly as a freight train, transporting about 14,000 bales of cotton in 1838 alone. That said, it also carried passengers, with some 4,000 registered riders in 1838. The weak wooden rails meant that heavier steam locomotives could not be used - cars were instead pulled by horses or mules.

The railroad sold lots in Port Leon, which enticed the entire town of Magnolia (a port town upriver bypassed by the railroad) to move to Port Leon in 1838. Port Leon seemed a town on the rise and 1841 boasted a population of 450. Nonetheless, in that year, a yellow fever outbreak killed 139 residents. Two years later in 1843, the Port Leon Hurricane destroyed or severely damaged every structure in town, killing just one. After the storm, most of the remaining residents moved upriver and established Newport. The Tallahassee Railroad repaired its line into St. Marks, building a new terminal. Port Leon was forgotten and reclaimed by nature.

The Lake Wimico and St. Joseph Canal and Railroad

The Lake Wimico and St. Joseph Canal and Railroad opened in 1836 - first steam railroad in Florida. Originally intended as a canal between the Apalachicola River and St. Joseph, the development company was quick to embrace the railroad fad - it was after all cheaper, faster, and could handle more freight. In March 1836, an eight-mile-line began operations between Columbus Bayou off Lake Wimico and St. Joseph, but the connecting waterways proved too shallow for steamships. This forced the railroad to build a longer 28-mile line (completed in October 1839) from St. Joseph to the Apalachicola River, where goods could be directly offloaded from the steamships to train cars. Iola (labeled here) was founded at the railroad's terminus. In 1841, a yellow fever epidemic ravaged St. Joseph and later that year a hurricane destroyed the railroad's wharf - pushing the railroad into bankruptcy. Both St. Joseph and Iola were abandoned.

The Seminole were a composite tribe formed from various southeastern American Indian tribes that were relocated to a large reservation in Central Florida. These included the Alabamas, Choctaw, Yamasees, Yuchis, and Creek people, as well as escaped slaves.

In 1834 the United States government forced the Seminole to sign the Treaty of Payne's Landing, which gave the tribe three years to move west of the Mississippi and join the Creek Tribe. The Seminole, rightly claiming unfair negotiations, renounced the treaty and, instead of moving west, entrenched themselves in the Florida swamps. The subsequent war proved long and bloody, with neither side gaining a solid advantage. Ultimately, the superior resources and numbers of the United States military proved decisive. Most of the Seminole were removed to the Indian Territory (Oklahoma) while the remaining Seminole in Florida entrenched themselves to a large informal reservation located between Lake Okeechobee and Tampa.

This map was created by Samuel Augustus Mitchell and published by Thomas Cowperthwait in the 1850 edition of Mitchell's A New Universal Atlas.

Mitchell Sr., S. A., A New Universal Atlas Containing Maps of the various Empires, Kingdoms, States and Republics Of The World. (New York: Cowperthwait) 1850.     The New Universal Atlas is one of the great American atlases of the mid-19th century. Samuel Augustus Mitchell first issued the atlas in 1846 when he acquired the map plates and copyright for Tanner's New Universal Atlas from its publisher, Carey and Hart. The first transitional 1846 edition was published jointly with Carey and Hart, but a second edition was published in the same year with the Tanner imprint erased. This edition of the atlas also introduced the signature S. A. Mitchell green and pink color scheme. Most of the maps from the early editions of the atlas were engraved by H. N. Burroughs or C. S. Williams, often bearing their copyright. Burroughs maps also tended to have what map collector David Rumsey refers to as the 'Cary and Hart' borders, which featured a narrow vine motif. These borders were replaced, along with the Burroughs imprint, with the more traditional Mitchell strap work border used in the atlases until 1856. Mitchell published editions until late in 1850, when he sold the rights to Thomas, Cowperthwait and Company of Philadelphia. Under Cowperthwait, the atlases continued to be published and bear the Mitchell name until 1856, when it the plates were again sold, this time to Charles Desilver. Desilver reworked the plates with new border art and a revised color scheme in the style of J. H. Colton. Desilver issued editions from 1857 to 1860, when the atlas was phased out in favor of Samuel Augustus Mitchell Jr.'s New General Atlas.