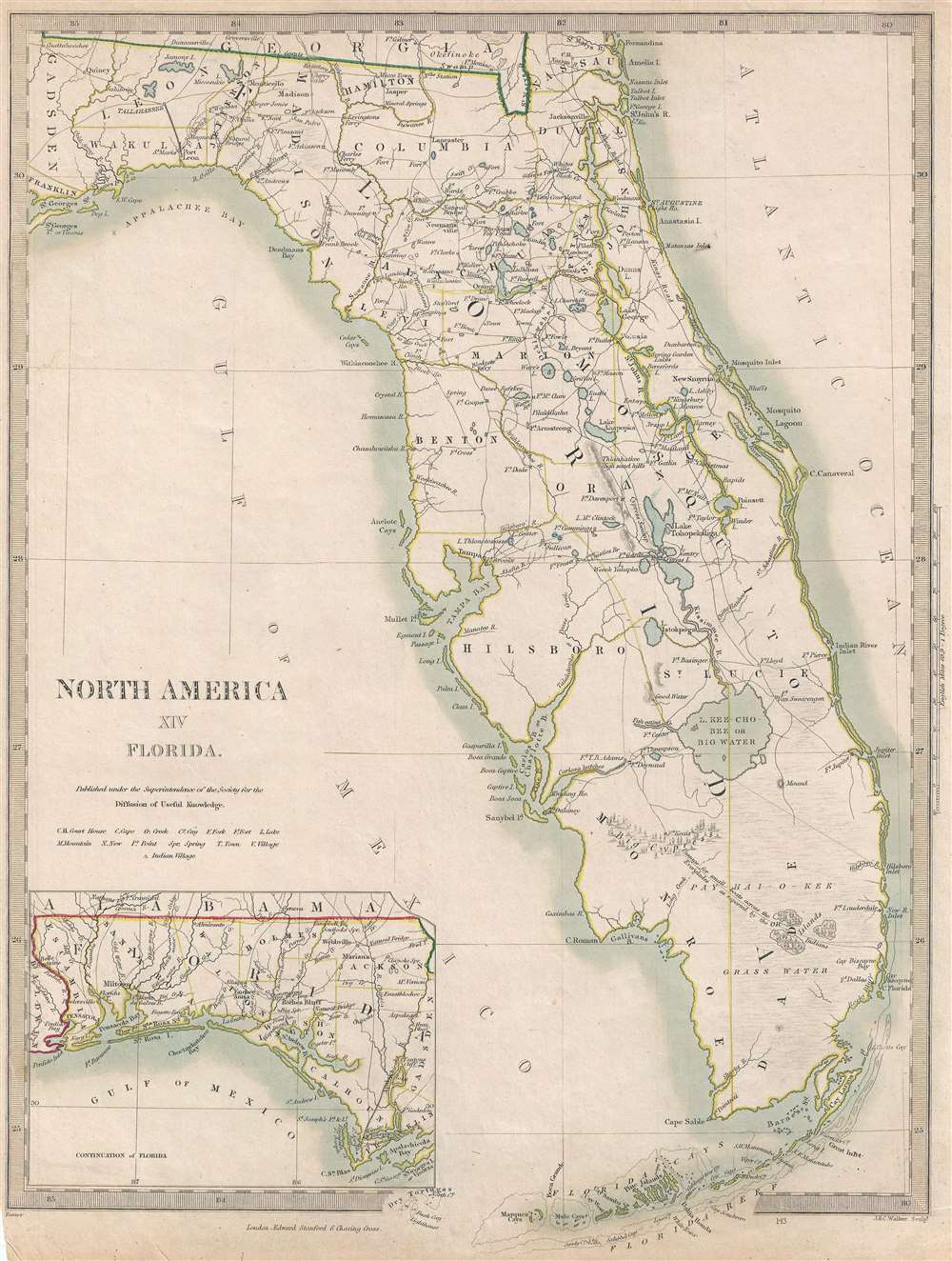 Published near the end of the Third Seminole War.
$350.00

This is an 1857 Society for the Diffusion of Useful Knowledge map of Florida. The map depicts the region from Gadsden County to the Atlantic Ocean and from Georgia to the Florida Keys. This is a later edition of an early map of Florida bearing the imprint of Edward Stanton. St. Lucie County is still labeled, which changed to Brevard County in 1855. The map identifies several Indian villages, forts, lakes, mountains, towns, and a host of additional topographical features. The district assigned to the Seminoles has disappeared, and has been replaced by Monroe, Dade, and Lt. Lucie counties. Two years before this map was published, the Third Seminole War began, which was the last of a series of three conflicts between the Seminole Indians and the United States Army. It resulted in most of the Seminoles being forcibly removed from Florida, although some remain to this day, staunchly entrenched deep in the Everglades.

This map was created for the Society for the Diffusion of Useful Knowledge and it appears that some information from this map was gained from work by the cartographer H.S. Tanner. It was engraved by the firm of John and Charles Walker and published by Edward Stanford in 1857.

Atlas of the Society for the Diffusion of Useful Knowledge, ( London) 1857.     The Society for the Diffusion of Useful Knowledge (S.D.U.K.) Atlas was initially issued in parts over several years by Baldwin and Craddock to promote the society's mission of egalitarian self-education. The first S.D.U.K. began appearing in 1829 when the society contracted John Walker to produce the first proofs. The first S.D.U.K maps were produced serially by Baldwin and Craddock and issued in 2 map batches, priced at 2 shillings each. The series, originally anticipated to feature 50 maps, ultimately contained 200 and took over 14 years to produce. The initial production was completed in 1844 when the whole was issued in its first compiled atlas edition. Around 1842, following the 1837 bankruptcy of Baldwin and Craddock, publication of the atlas was taken over by the Society itself, who issued editions in 1838, 1839, 1840, 1841, and 1842. Overburdened by the work of publishing, they then outsourced the publication to Chapman and Hall in 1842. Chapman and Hall produced editions in 1842, 1843, and 1844. Dissatisfied with the quality of Chapman and Hall printing, the Society turned to another publisher, Charles Knight, who issued editions under the auspices of the Society in 1844, 1845, and 1846. In 1846 Knight officially acquired the plates in his own right and reissued in revised editions until 1852, when he sold them to George Cox. Cox in turn sold them to Edward Stanford who published them from 1856 well into the 1860s. The S.D.U.K. Atlas is known for the quantity and quality of its maps. The S.D.U.K. published many maps of areas largely ignored by other publishers. The many city plans incorporated into the atlas are particularly admired and are the highlight of the S.D.U.K.'s long map publishing history. As a whole the S.D.U.K. Atlas was groundbreaking in terms of quality, scope, and being offer at a cost effective price point.